Galaxy today presented its December 2019 quarterly highlights to stakeholders. Galaxy, which is among the premier spodumene producers, is facing similar industry challenge of a lithium supply glut as its peers on ASX.

However, the effective corporate strategy of the company, which is to reduce the cost of its spodumene production at Mt Cattlin and priority development of its lithium downstream chemical business- Sal de Vida, could be the hidden ace required for the Blackjack.

To Know More, Do Read: Galaxy to Adopt Cost-Cutting Measures and leap into Lithium Downstream Processing

The downstream prospect is presently the priority, and Galaxy is de-risking the project via a multi-stage approach. Sal de Vida would be developed in 2 to 3 stages with Stage 1 to be financed internally through a decent financial position.

The multi-stage approach would allow the company to de-risk the execution of the corporate strategy via staging capital expenditure, reducing development risk, and simplifying construction and logistical management.

The Final Investment Decision (or FID) for Sal de Vida would be taken in the early second half of the year 2020 and would be subject to capital and operating cost estimates in the lowest respective quartiles. The primary aim of Sal de Vida would be to reach initial commercialisation of primary lithium carbonate, which could boost the earnings realisation.

The primary lithium carbonate would then mark its presence for the existing carbonate purification facilities (primary customers).

Galaxy completed a hydrometallurgical test work and moved towards the technical process development during the December 2019 quarter, which further provided the prospect with an optimised in-house flowsheet.

The optimised flowsheet for Sal de Vida primary lithium carbonate production improved recovery, reduced the capital and operational costs, and improved the quality of the product.

The current improvement in the flowsheet for Sal de Vida is as below: 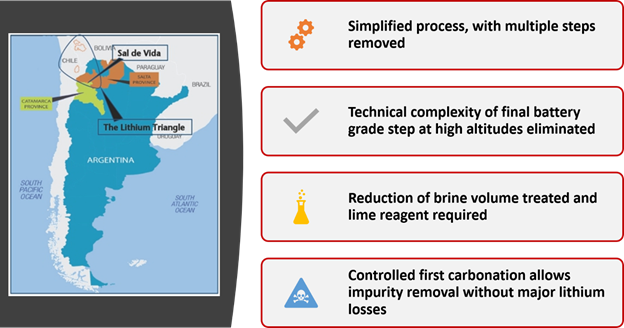 GXY assembled and installed an upgrade for the onsite pilot plant module, the installation of the final service of which is anticipated to be completed during the first quarter of 2020 along with the commencement of the pilot plant, which would further generate the primary carbonate, thereafter.

The construction of 15Ha evaporation ponds continued during the quarter, and the lining the filling of the same is underway.

The Company finalised the engineering required to pump and bring the brine to the pilot plant and contracted additional construction contractors.

Galaxy is now strategically reducing the mining and production rate for Mt Cattlin to preserve Mineral Resources until the lithium market revives thoroughly.

During the December 2019 quarter, GXY produced 43,222 dry metric tonnes of spodumene concentrate, which remains ~13.58 per cent below against the previous quarter production.

Measures for the preservation of cost and minerals include

Measures for the optimisation of mining operations

The mined ore witnessed an increase in number and grades, which could go against the reserve model adopted by GXY. The ore mined surged by 8 per cent against the previous quarter, while the average grade stood at 1.34 per cent of lithium oxide, which remained higher than the guidance grade of 1.15 per cent lithium oxide.

However, Galaxy mentioned that the increase in grade was predominately due to the less mining dilution achieved against the reserve model, and due to the company’s target of high-grade zone to build run-of-mine stock ahead of the planned cessation of operations.

On the processing side, Mount Cattlin witnessed a record-breaking production in 2019 and stable operations at nameplate capacity to achieve the required final product specification cost-effectively, which further suggested consistent operational execution by the Compnay. 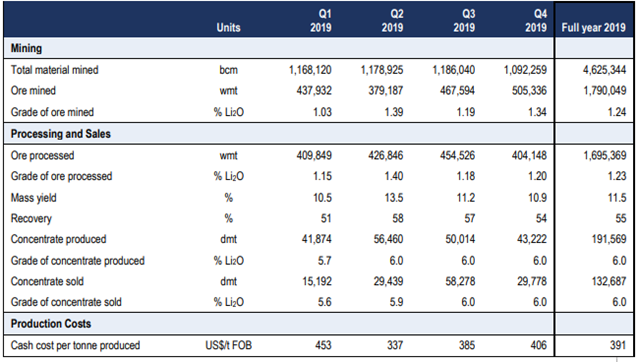 On the sales counter, GXY shipped 29,778 dry metric tonnes with a deferred shipment of 15,000 dry metric tonnes as the customer prepaid 65 per cent and choose to delay further shipment until the first quarter of the year 2020. The outstanding 35 per cent would be paid upon delivery.

The Free-on-Board (or FOB) of the company witnessed a Q-o-Q increase ~ 5.45 per cent amid lower production volume due to the mid-December cessation of operations and decline in recovery rates.

Galaxy refined the strategy for 2020 during the December 2019 quarter to optimise Mt Cattlin operations in tandem with the market condition and decided to prioritise value against volume once again.

Galaxy expects a scale-back of ~ 60 per cent in mining operations and further anticipates ~40 per cent of throughput for 2020 from the contaminated ore stockpile, which would be o-treated through the process plant, through the implementation of the front-end optical sorters.

The company targets the spodumene production of 14,000-20,000 dry metric tonnes during the first quarter of the year 2020.

Galaxy also stated that the 2020 production volume along with the existing stockpile of ~ 65,000 dry metric tonnes would suffice to meet contract obligations in 2020. The company is also looking forward to diversifying its consumer base and presently in talks with other potential offtake consumers.

China, which is the primary consumer base for GXY is entering New Year holidays season, and further sales and shipment arrangements for the first quarter of the year 2020 would be finalised later over coming months ahead.

Also Read: Tesla and Others are Back for Cobalt; Australian Mines’ Sconi Project To Lead the Australian Front?

The current existing strategy to maintain stockpile and the cessation of existing mining contract places the company in the position to respond in correspondance with the market condition ahead, if the demand materially improves, the stockpile would allow the company to ramp up the production to meet the demand, and if not, the reduced production guidance would suffice to meet current contract obligations.