Meanwhile, the company declared a fully franked dividend of 78 cents per share payable on 9 October 2019 to the shareholder, in records on 2 September 2019. 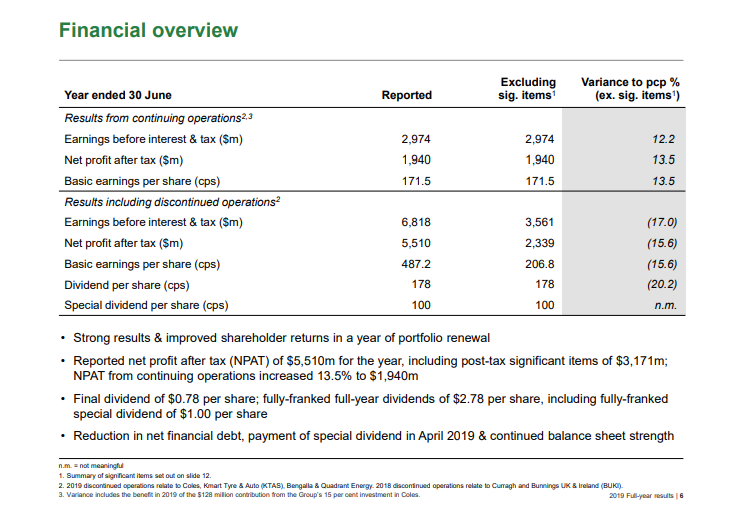 Retail: Reportedly, in Bunnings, the company had delivered solid result depicting a diversified customer base and product offering. Besides, the trading conditions moderated for Kmart Group, where the performance of Kmart was below expectations.

Meanwhile, in Officeworks, the company achieved resilient earnings and sales growth while enforcing a price leadership position. The growth was underpinned by enhancements in online offerings along with new and expanded product ranges.

Meanwhile, the performance was subdued in Industrial and Safety business attributing to the impact on Blackwoods’ earnings due to ongoing investment in customer service and the enterprise resource planning system.

Other Businesses: Reportedly, the corporate overheads and other businesses achieved earnings of $122 million against a loss of $122 million in the previous year. Besides, the segment includes the company’s 15% share of Coles’ NPAT and excluding Coles, the earnings from the segment increased $127 million. Meanwhile, the company recorded a $61 million gain related to the investment in Barminco following the purchase by Ausdrill.

Outlook: Reportedly, the strategies applied during the half-year had repositioned the portfolio and strengthened the balance sheet of the company. The strong & diversified portfolio of the company provides better positioning to face a range of economic conditions.

Besides, the retail divisions of the company are well placed, and the company would continue to invest in capabilities, including digital offering, creation of a platform for expanding addressable markets and improving efficiencies.

Meanwhile, the performance of industrial segments is tied to the international commodity prices, exchange rates, seasonal outcomes and competitive factors. The company intends to build upon the capabilities and platform to capitalise on growth opportunities within the existing business, acquired investment and other value-accretive transactions. Further, the company would only pursue growth opportunities, with potential to deliver shareholders value, over the long period of time. 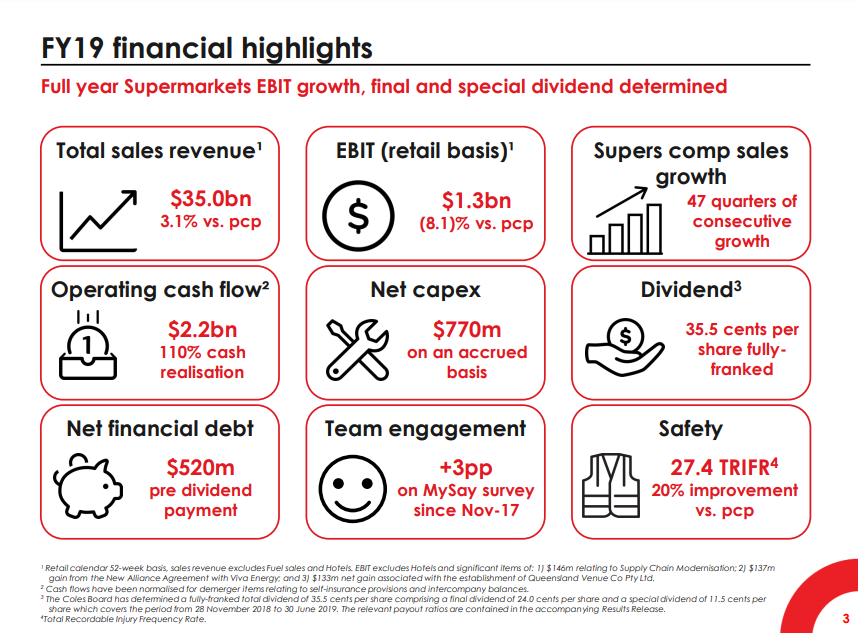 Supermarkets: Reportedly, the sales revenue stood at $30.9 billion for the period, up by 3.2% over the previous year. Sales revenue was backed by online, new stores and successful collectable campaigns. The company recorded sales growth across all states, particularly in meat, bakery and dairy.

Meanwhile, the gross margin of the segment improved by 20bps to 24.8% attributing to strategic sourcing and execution of the company’s Own Brand powerhouse strategy. EBIT was up 2.2% to $1,183 million underpinned by higher sales, and improved gross margin.

Liquor: Reportedly, the sales from the segment were $3.1 billion, up by 1.9% over the prior year. By the end of the year, twenty-three Liquorland and twenty-nine FCLM conversions were completed. Besides, the company continued with investment in the store network with 27 new stores opened and 16 stores were closed.

Meanwhile, the company achieved improvement of 41bps in the gross margin, which were attributed to margin improvement from exclusive liquor brands and improved supplier collaboration.

Express: Reportedly, the C-store sales were up 1.2% for the period attributing to decline in tobacco sales. However, the company witnessed double digit growth in the food-to-go (FTG) category. The fuel volumes were down by 13% during the period, and an agreement was signed with Viva Energy Group Limited (ASX: VEA) to improve fuel pricing. Meanwhile, the segment generated EBIT of $50 million, with flat EBIT in the second half.

Other: Reportedly, the segment includes corporate costs, the company 50% share of flybuys net profits, and net gain loss generated by the company’s property portfolio. Besides, the corporate costs during the second half were below the estimated costs of $66 million.

Meanwhile, the share of flybuys attributed to a loss of $1 million in the second half, against a profit of $6 million in the first half. The company recorded net gains of $7 million for the year from several property settlements. 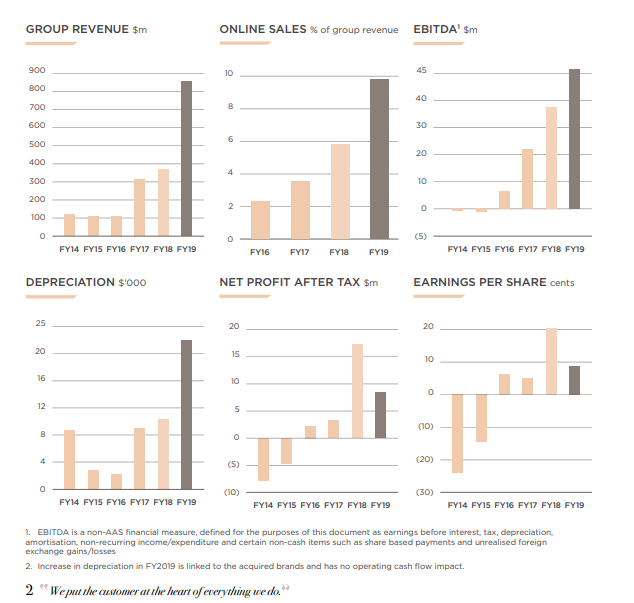 Reportedly, the company has seen substantial improvements in the results since FY2015, and now the company is prioritising gross margin growth, which resulted in an underlying EBITDA of $45.5 million. Besides, the company has improved and invested in the online channel strategy, and the sales contribution of online sales grew to 9.8%.

Strategies for Growth: Reportedly, the company’s loyalty database host 4.4 million emails, which reflect the potential for future growth. Besides, the company intends to increase the store footprint across all brands. It would also drive digital expansion through increased product and non-apparel category offerings, broader presence on global marketplaces, and launch of new non-apparel category websites.

Financial Position: Reportedly, the balance sheet continues to strengthen with the positive operating cash flow of $23.5 million and net cash of $7.1 million at the year end. Under the current liabilities front, the company is carrying no borrowings.

Meanwhile, the company had declared a fully franked dividend of 5.5 cents per share payable on 24 October to the shareholders, on record on 10 October 2019.

FY20 Outlook: Reportedly, the company would continue to place customer interest on a priority. It expects EBITDA in FY2020 to be in accordant with market consensus of $75 million. The company intends to capitalise on Group’s data, store expansion and online strategies.