The “Father of Value Investing”, Mr Benjamin Graham suggested an investment philosophy to analyse stock data to determine assets that have been systematically underrated, i.e. whose fundamental value is more than its market price. One of the most renowned investors, Mr Graham advised to buy bargain stocks to diversify stock portfolio. He followed a strategy of buying undervalued stocks, holding them for a long term until the market price reflects their true value.

Mr Graham’s strategy of bargain buys has so far helped may investors generate substantial returns in the equity market. The ongoing market fluctuations offer a considerable opportunity to investors to implement his strategy of value investing.

But the question arises that how can we identify the bargain buys among so many stocks trading on the exchange platform? Take a look a few tips that can help us find bargain stocks: 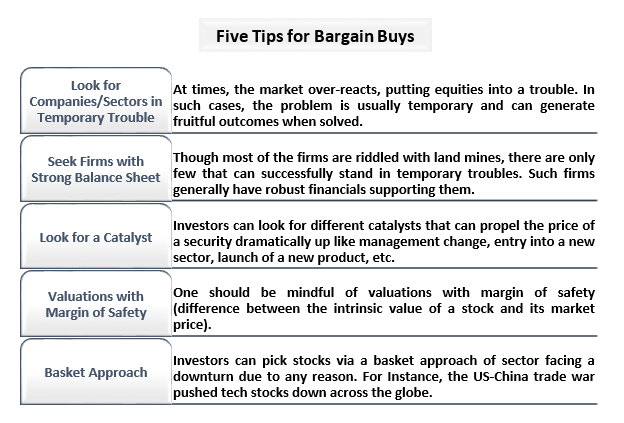 Given this background, let us discuss few stocks listed on the Australian Stock Exchange (along with their recent updates), that can be on investors’ watchlist for bargain buys:

Australia-based thermal coal-mining firm, New Hope Corporation Limited (ASX: NHC) has welcomed the recent decision of the Queensland Court of Appeal dismissing Oakey Coal Action Alliance’s (OCAA) appeal and allowing New Acland Coal Pty Ltd’s (NAC) cross appeal. NAC is a wholly owned subsidiary of NHC, which has been served with an application by OCAA for special leave to appeal to the High Court of Australia regarding orders made by the Queensland Court of Appeal.

The company notified that OCAA’s application looking for leave to appeal to the High Court does not alter the position that there is no hurdle to the Queensland Government giving ultimate approvals for the Stage 3 of New Acland Coal Mine Project. The project is likely to produce $7 billion in economic activity over an expected fifteen year of life span.

The company has asked for an immediate grant of an Associated Water Licence, the required Mining Leases and approval for the continued use of the Jondaryan loadout facility from the Queensland Government.

NHC closed the trading session at $2.15 on 18th December 2019, with a rise of 0.47 per cent relative to the last closed price. The stock has delivered a negative return of 34.9 per cent on a YTD basis.

Rare-earths mining company based in Australia, Lynas Corporation Limited (ASX: LYC) became unsuccessful in getting regulatory approval from Malaysia for a rise in the lanthanide concentrate processing limit for CY19.

In addition, the regulator has provided the company with a list of management plans and additional reports that the regulator now needs in order to reassess the application. The company intends to reapply for a rise for CY20 as the processing limit resets on the first day of January each year.

Sydney-headquartered energy company, Origin Energy Limited (ASX: ORG) has recently released its quarterly results for the quarter ended September 2019 on the ASX. The company’s quarterly report covered the performance of its both Energy Markets and Integrated Gas businesses.

In Energy Markets business, the company observed a year-on-year decline in electricity and gas sales volumes, consistent with its FY20 EBITDA guidance. Due to lower retail customer numbers and usage and lower business sales, the electricity sales were 8 per cent down year-on-year and flat quarter on quarter.

Moreover, due to the non-repetition of short-run wholesale contracts in Queensland, partly counterbalanced by higher volumes headed to generation, the natural gas volumes were also 7 per cent down year-on-year.

In Integrated Gas business, the company reported solid production, with a 7 per cent rise in year-on-year revenue. The year-on-year production of Australia Pacific LNG improved by 3 per cent, fuelled by higher availability of well and the arrival of Eurombah Reedy Creek InterConnect pipeline online.

In addition, the revenue rose by 7 per cent to $688 million in the quarter, backed by increased LNG volumes and higher effective Australian dollar oil prices.

Addressing the Annual General Meeting, US-headquartered software company, Altium Limited’s (ASX: ALU) Chairman Samuel Weiss reviewed the financial results of FY19. He mentioned that the company’s revenue grew by 23 per cent and net profit by 41 per cent in FY19 relative to FY18. It was the eighth consecutive year in which the company delivered double-digit revenue growth.

The worldwide revenue of the company improved to USD 171.8 million, and the Profit before tax rose by 45 per cent to USD 57.6 million in FY19. The Earnings per share was also 41 per cent up to US 40.57 cents. Moreover, the company paid dividends of AU 34 cents during the year, 26 per cent higher than the dividends of AU 27 cents in the prior year.

Among multiple countries, China was the stand-out performer, with more than 37 per cent revenue growth relative to last year.

The second largest provider of death care services in New Zealand and Australia, Propel Funeral Partners Limited (ASX: PFP) has recently notified that it has increased its senior debt facilities from $100 million to $150 million with Westpac Banking Corporation (ASX: WBC), amended a key covenant limit and extended the maturity profile.

The company’s current senior debt balance is about $66 million, and it has a binding commitment to acquire the Dils Group, which will need around $20 million of cash on completion (likely to occur in 3rd quarter of FY20). Hence, about $86 million of the company’s previous senior debt facilities limit of $100 million is currently committed and/or drawn.

The company mentioned that the expansion of its senior debt facilities to $150 million means it is well funded to progress with its acquisition led investment strategy, with about $70 million of available funding capacity.