Australian health care sector is growing potentially by generating significant profits in a short period, and that is something the investors are also closely monitoring. Australiaâs public healthcare system is one of the worldâs best, jointly run by federal, state and local governments. Private healthcare players are also rapidly advancing their clinical trials, drug development and R&D initiatives to strengthen their foothold in the competitive lucrative environment. In this article, we will be highlighting the topmost market-moving healthcare stocks concerning their latest developments.

Australia based medical technology company, Sienna Cancer Diagnostics Ltd. operates in the United States and Australia. The company distributes its products in the United States, Europe, Asia and Latin America with the vision to secure a pivotal position for the development and commercialisation of in-vitro diagnostic (IVD) tests for the global pathology market. Stock Performance- The companyâs stock is trading at a price of $ 0.050 with a market capitalisation of approximately $14.45m with the close of market on 17 October 2019.

ICS is an Australia based technology investment company which is currently in Australia and the UK. The Company is engaged in working for growing the Medical Billing and Collections (MBC) business as the market commander. Financial Year 2019 Results (for the period ended 30 June 2019)

Key financial information, Source: Companyâs report The company recently announced 20-40% uptick in the FY2020 profit guidance to $1.2-1.4 million. Stock Performance- The companyâs stock is trading at a price of $ 1.450 with a market capitalisation of approximately $15.35 m with the close of market on 17 October 2019. Analytica Ltd (ASX: ALT) Analytica provides an e-healthcare system for women who are suffering from stress urinary incontinence, named as PeriCoachÂ® System. PeriCoachÂ® System This system comprises a device, web portal and smartphone app. This device transfers the information recorded in the pelvic floor muscles to the smartphone app from where the data can be loaded to a cloud database for keeping track on patient progress by the physician. PeriCoach has regulatory approval for urinary incontinence in Australia and has CE mark and USFDA 510(k) clearance. 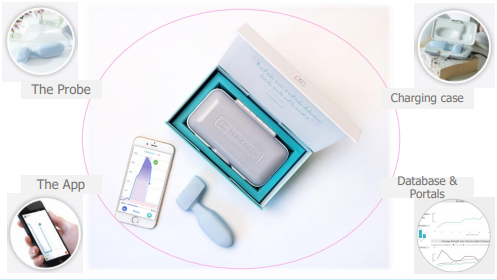 Elements of Pericoach system, Source: Companyâs Report Stock Performance- The companyâs stock is trading at a price of $ 0.003, down 25% with a market capitalisation of approximately $14.08 m with the close of market on 17 October 2019.

Medibio is an Australian based health technology company which is focusing on the aid in the early detection and screening of mental health conditions. During the year ended 30 June 2019, the company entered into a funded Research Agreement with the Department of Biomedical Sciences of Humanitas University in Milan, Italy. Dr Giampaolo Perna, a Medibio Scientific Advisory Board member, is supervising this collaboration. This Research Agreement will help the companyâs continued growth of mental wellbeing software products based on companyâs Intellectual Property. Regulatory updates Stock Performance- The companyâs stock is trading at a price of $ 0.013 with a market capitalisation of approximately $12.94 m with the close of market on 17 October 2019.

Neuren Pharmaceuticals Limited having its headquarters in Australia is a biopharmaceutical company which is engaged in developing new treatments for neurodevelopmental disorders by using synthetic analogues of neurotrophic peptides that are naturally formed in brain. Neuren Pharma announced on 16 August 2019 that the company received a grant on a new patent for NNZ-2591 by the Japan Patent Office with July 2034 as expiry. The company announced on 16 October 2019 that it received a grant for Orphan Drug Designation to Neurenâs NNZ-2591 from FDA for the treatment of Phelan-McDermid syndrome and Pitt Hopkins syndrome. Key milestones in Q4 2019 On 20 September 2019, Companyâs Executive chairman Richard Treagus shared his views on the companyâs outlook for Q4 2019 by saying that the company is approaching an exhilarating fourth quarter- Stock Performance- The companyâs stock is trading at a price of $ 2.440, down 4.7% with a market capitalisation of approximately $262.83m with the close of market on 17 October 2019.