Australian companies - The Citadel Group Limited, CSG Limited and iSelect Limited have released their full-year results (FY19), while Reckon Limited has released its half-yearly results (H119). Letâs take a detailed look at these companiesâ performance during the reported periods.

The Citadel Group Limited (ASX: CGL), a software and technology company that specialises in managing enterprise information in complex environments, released its FY2019 full-year results for the period ended 30 June 2019, on 20 August 2019.

In line with the guidance provided by the company in May 2019 for revenue and EBITDA in the range of $ 97 million to $104 million and $22 million to $24 million, respectively, CGLâs FY19 revenue and EBITDA stood at $ 99.2 million and $ 23.3 million, respectively. The revenue of the company declined by 6.9% year-on-year, while EBITDA fell by 31.7% and NPAT declined by 43.8% to $ 10.9 million. As a result, the companyâs final dividend for the financial year 2019 reported a decline of 33.3% to 6 cents per share. According to the company, financial performance during FY19 was impacted by a delay in extensions for customer-controlled projects in addition to a lower customer spending in the last quarter.

During the period, the company won contracts across its core verticals which comprise of Knowledge, Health and Technology. The company also released new products which supported the Software/SaaS revenue growth by 23% year-on-year to $ 34.2 million in FY19.

The balance sheet witnessed a slight increase in net assets. The total shareholdersâ equity for the period was $ 86.345 million. The net cash inflow from operating activities declined from $ 20.356 million to $ 14.738 million, while net cash outflow from investing and financing activities was $ 8.698 million and $ 15.853 million, respectively. The net cash available by the end of FY2019 was $ 14.021 million.

CSG Limited (ASX: CSV), a provider of technology and print managed services, on 20 August 2019, released its full-year results for the period ended 30 June 2019. The company reported an increase of 71% year-on-year in underlying EBITDA to $ 17.1 million. However, revenue of the company declined by 3% to $ 217.6 million. Its underlying NPAT for the reported period grew by 148% to $ 5.7 million.

The company launched the CSG 2021 Program during FY19, which includes new vision, mission, strategy and values. The companyâs is technology momentum is continuing to build, with a 17% increase in subscription revenue as compared to the previous corresponding year. It exited the financial year 2019 with an increase of 17% in monthly recurring revenue to $ 2.5 million.

iSelect Limited (ASX: ISU) is a provider of online comparison services across insurance, utilities and personal finance products in Australia. On 20 August 2019, the company released its full-year results for the period ended 30 June 2019.

The company during the period made significant improvements to its operational performance as well as position the business towards sustainable growth. The companyâs reported EBIT (including iMoney) reached -$ 2.3 million in FY19, compared with -$ 15.3 million in the same period a year ago. There was a decline of 16% year-on-year in underlying revenue to $ 150.7 million; however, underlying EBITDA grew by 45% to $ 22.9 million in the financial year 2019. Underlying EBIT increased by 77% to $ 15.2 million and underlying NPAT grew by 64% to $ 11.1 million. 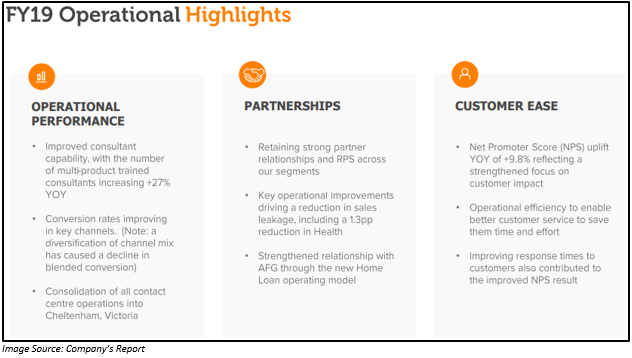 The balance sheet of the company remained strong during FY19 with a net cash balance of $ 22 million and zero debt. The company has decided not to pay a final dividend for FY19. 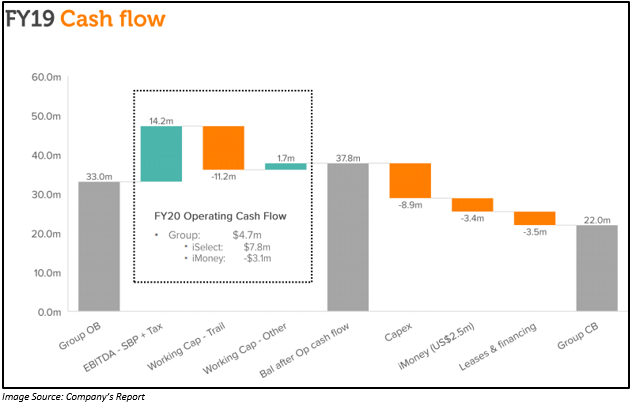 Reckon Limited (ASX: RKN) is a provider of online and desktop accounting software for business of all sizes, accountants, bookkeepers and professionals. On 20 August 2019, the company released its half-yearly results for the period ended 30 June 2019.

The company reported a 4.3% growth in EBITDA despite re-investment in sales and marketing, designed towards opportunities in the respective segments. As a result of strong cash flow during the period, the company was able to reduce its net debt by $ 7 million. The bank facilities also extended for another 3 years. The board declared an interim dividend of 3 cents per share, whose payment would be made on 18 September 2019.

The number of cloud users increased during the period by 21% to 62,000. The cloud division is still working on the transitioning of desktop users to the cloud. As a result, it is still be influenced adversely due to the mix impact of a lower ARPU on the cloud products. 46% of the revenue of the company is through the cloud segment. Also, 19,000 users have adopted the new payroll app of the company, which was launched in May 2019.

For Practice Management â Accountants Group, the company reported stabilization following the aborted sale in 2018. Large accounting firms prefer Reckon APS as the product of choice. For this segment, the focus of the company in the second half of 2019 would be to re-establish the growth trends of historical revenues. It reported substantial progress on the development of the new cloud suite.

The legal segment performed strongly during the period and the revenue for this segment grew by 11%, while EBITDA was up by 105%. The scan product continued to demonstrate good potential while driving new sales opportunities.