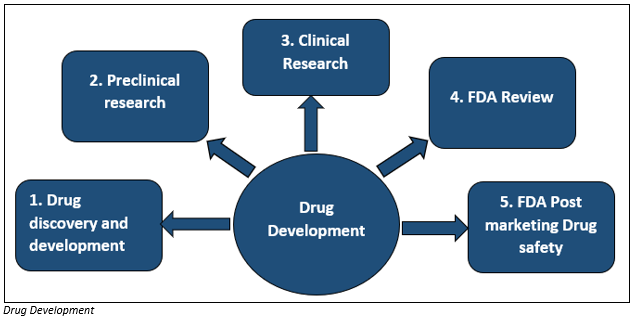 The first and the most essential step of drug development is drug discovery which includes designing a new product to prevent and reverse the effect of the disease condition. The researchers conduct many tests to find out the beneficial effect of the molecule against various diseases. After the identification of the compound, the experiments are conducted to gather pharmacokinetic (absorption, distribution, metabolism and excretion) information of the molecule. Besides, other information such as the mechanism of action, side effects, dosage, route of administration are also collected from the tests.

In the article, we would be discussing 3 ASX listed health care stocks that are engaged in drug development and have a strong product pipeline.

An ASX listed health care company Neuren Pharmaceuticals Limited (ASX: NEU) is into the development of innovative therapies for devastating neurodevelopmental disorders which are characterised by impaired signalling and connections between brain cells.

In an ASX update on 3 December 2019 the company announced that the European Patent Office (EPO) has released a notice of the grant of a new patent which is for NNZ-2591 for the treatment of neurodevelopmental disorders. The new patent is entitled “Neuroprotective bicyclic compounds and methods for their use in treating autism spectrum disorders and neurodevelopmental disorders” and after the issued it will expire in July 2034.

After the positive outcomes in the mouse models, the company has received an Orphan Drug designation for NNZ-2591 for the treatment of Pitt Hopkins, Phelan-McDermid, and Angelman syndromes. Currently, the company is into development and non-clinical studies which are required prior to submitting an Investigational New Drug Application to the Food and Drug Administration (FDA), and in 2020 it would start clinical trials. 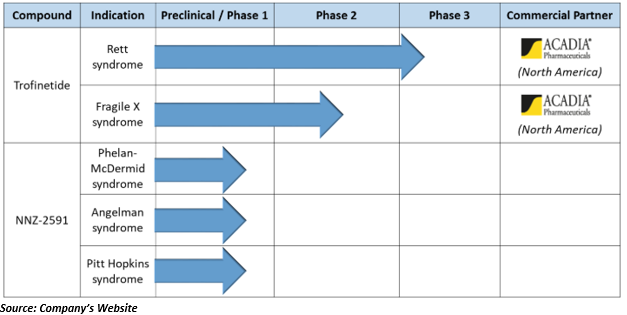 The company unveiled that its ACADIA Pharmaceuticals (North American licensee of Neuren) has started the phase 3 trial of trofinetide in Rett syndrome in the US. Rett syndrome program of Neuren has received a grant of Orphan Drug and Fast Track designation from the US FDA.

The expense of phase 3 trial as well as all other developmental costs are wholly funded by ACADIA, and Neuren has complete access to all the information to use for commercialisation purpose outside North America without any cost.

Neuren has strong Intellectual property, and all the patents are owned by the company without any royalties’ payables.

BIT225, Biotron’s lead compound is under phase 2 clinical development for HIV-1 treatment and has a promising pre-clinical program for Hepatitis B (HBV). Besides, Biotron has a strong pre-clinical pipeline with a notable portfolio of pharmaceutical compounds-

The lead compound of Biotron- BIT225 is under the clinical development to treat Hepatitis C virus (HCV) infections and HIV-1 and has completed seven clinical trials. The compound has been administered in 55 healthy human volunteers, and 94 HIV-1 or HCV infected subjects.

Besides BIT225 development, the company also has a portfolio for non-clinical (pre-clinical) antiviral programs for the development of the pharmaceutical compounds to target various significant well-known and emerging viral infections such as Dengue, Zika and Influenza virus.

According to one recent update on ASX on 3 December 2019, the company announced that it would be presenting the clinical trial data at the Conference on Retroviral and Opportunistic Infections (CROI) which is to be held in Boston, the United States in March 2020. This conference is the preeminent international HIV-1 conference which brings together translational, top basic and clinical researchers from the world who would share the recent studies and developments in the constant battle against HIV/AIDS.

Progenza, stem cell platform, uses mesenchymal stem cells (MSCs) for the reduction of inflammation and healing of diseased tissue. It targets neuropathic pain and osteoarthritis (OA). Progenza has completed phase 1 clinical trial for osteoarthritis and has entered in phase 2 trial.

Sygenus stem cell platform uses bioactive molecules which are secreted by mesenchymal stem cells (MSCs) for the reduction of pain, inflammation, healing and repair. Sygenus heals neuropathic pain, nociceptive pain and oral conditions and it is under pre-clinical stage.

The company released its annual general meeting (AGM) presentation on ASX, highlighting the overview of the company with upcoming milestones that are as follows-