The ability of the Australian financial system to withstand shocks is recognised across the world. The country’s financial system has continued to strengthen, with the bank capital ratios being at considerably higher levels than they were a decade ago. The ratios are sufficient enough to survive a shock of equivalent magnitude to most of the historical bank crises.

Moreover, the country’s financial system has observed a considerable transformation, supported by a change in the way people shop and pay now-a-days. For making payments, people are largely moving away from cash and cheque payments towards electronic methods of payments. The trend of cash payments has declined sharply in Australia, with cash now being a part of just a quarter of everyday transactions, most of them being small value payments.

Australia is witnessing new and innovative modes of payment amid growing competition to provide more efficient and smooth payment experiences. The rate of adopting fast retail payments is also a bit faster in Australia than the majority of the other countries that have launched fast payments.

As per Reserve Bank of Australia’s (RBA) Governor, Mr Philip Lowe, Australia needs a payments system that could support the country’s digital economy. In a recent speech, the Governor has discussed the progress made so far in the country’s payment system and the areas where more progress is required.

Given this background, let us take a closer look at Australia’s payments system from the Governor’s point of view.

Mr Lowe discussed the growing usage of New Payments Platform (NPP) since its launch in early 2018. NPP is a top-notch platform for payments innovation, assisting to turn the possibilities offered by new ideas available anywhere into real progress. It operates to the highest standards for benefitting millions of Australians.

NPP enables businesses and consumers to make 24/7 and real time payments, attach files of more text driven documents and pay without remembering account numbers. The platform was first made public in February 2018 via the launch of the first NPP Overlay Service, Osko and a simple addressing capability, PayID

He notified that the NPP went off a slow start after it was launched, but it is now growing exponentially. The monthly transaction volumes and values of the NPP have tripled over the last one year, with the platform processing around 1.1 mn payments on an average each day, valuing about $1.1 bn. 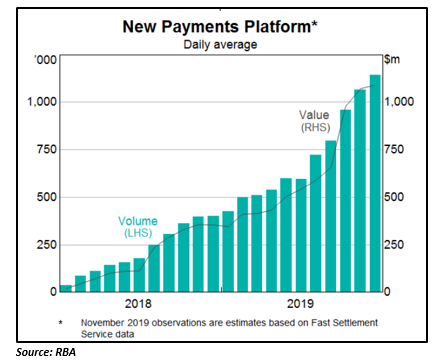 The reach of NPP is improving significantly, with about 86 entities being connected to the NPP, out of which 74 are indirectly linked through a direct NPP participant. In addition, at least six non-ADI fintechs are using the platform to innovate and offer new services to customers. In all, around 66 mn bank accounts in Australia are now capable of making and receiving NPP payments.

The growth in NPP is supported by the use of PayID service that is also expanding, with about 3.8 mn PayIDs being registered so far. Mr Lowe encouraged people to use PayIDs while making payments as it is much faster and easier mode.

Though the RBA acknowledges the benefits of NPP, it seems disappointed over the slow implementation of NPP by Commonwealth Bank of Australia (ASX: CBA) and expects the bank to make it available soon.

As per the central bank, the slower than promised rollout of the platform is due to the lack of efforts being put by some major banks to develop innovative functionality. It is being observed that several banks have been hesitant in committing time and funding to aid the advancement of new functionality provided that others have been sluggish to introduce their 1st day functionality.

The Governor believes that to realise NPP’s data-rich capabilities and its full potential, further progress is needed. The NPP Australia (NPPA) has been recommended to issue a timeline and roadmap for the additional functionality of NPP that it has approved to develop.

NPPA has already published an inaugural roadmap in October and rolled out a mandatory compliance framework. The key elements of the roadmap included:

The central bank strongly believes that these additional NPP capabilities are expected to deliver considerable value for the broader community and businesses.

The RBA noted a considerable change in the adoption of ‘tap-and-go’ payments in Australia, with about 80 per cent of the POS (Point of Sale) transactions currently being ‘tap-and-go’. This is a much higher share than the share in majority of the other countries across the globe.

The growth in this payment system is driven by:

The Governor mentioned that the progress has also been made on enhancing the safety of electronic payments, especially related to card not present (CNP) fraud transactions. Though the rate of fraud still remains high, it has declined recently.

AusPayNet’s move to develop a new framework to deal with fraud was appreciated by the Governor. He believes that this framework that strengthens the authentication requirements for some particular types of transactions, will assist in lowering card-not-present fraud and supporting the continued growth in online commerce.

The central bank has called for the need for an improvement in the provision of digital identity services (portable) that enables the countrymen securely prove their position in the digital environment.

The RBA noted that Australia’s digital identity system is segregated and fragmented, which has led to a multiplication of passwords and credentials. This has created significant inefficiencies and inconvenience and has given rise to security vulnerabilities, which could weaken development of the country’s digital economy. The central bank thinks that this area of financial system needs progress as it could generate compliance risks and other expenses for Australian financial institutions.

Recognising the importance of this issue, the Australian Payments Council developed the ‘TrustID’ framework. Moreover, the Digital Transformation Agency is also working on the development of the Trusted Digital Identity Framework. The major challenge is now to build on these frameworks and create a robust digital identity ecosystem in the country.

As per the RBA, a strong digital identity system will:

Cross-border retail payments: Cost of cross-border payments need to be reduced as it is very high for many people, creating difficulty in making payments.

Operational Resilience: Progress is needed to enhance the operational resilience of the Australian electronic payments system.

RBA believes that it is adequate to wrap up the cheque system at some point of time, and that point is moving closer. This has called for a need for a suitable alternative payment technique for Australians who depend on cheques.