Defensive stocks are less-prone to cyclical shocks that disrupt the market sentiments for the investors who have invested in such stocks, which could be prone to economic adjustments in an economy. Thus, it can be concluded that defensive stocks are not susceptible to systematic risk to some extent.

Some characteristics of the defensive stocks are a high-quality large business, consistent earnings growth, predictable cash flow coupled with strong and improving dividends. Considering these facets of such stocks; the world started to term such stocks as âproxyâ for the bonds on the capability of paying a steady income.

Historically speaking, the low-interest environment marks the emergence of capital flows into Bond Proxies in the markets. This happens when the bond yields touch the lower level against the dividend yield of companies; companies here are the ones which are measured highly amongst the investors.

These businesses attract more capital at the time economic concerns are looming over the market. Some features of these stocks include historically proven performance of stable returns backed by dividend and capital gain, and at times the product offered by these companies are of significant nature that the consumptions of such products are not correlated to the fluctuations in the disposable income.

Transurban Group (ASX: TCL) is a toll-road operator, which is also engaged in building road & infrastructure in Australia, and it also leverages technology to develop innovative transport & tolling technology to enhance the travel experience. 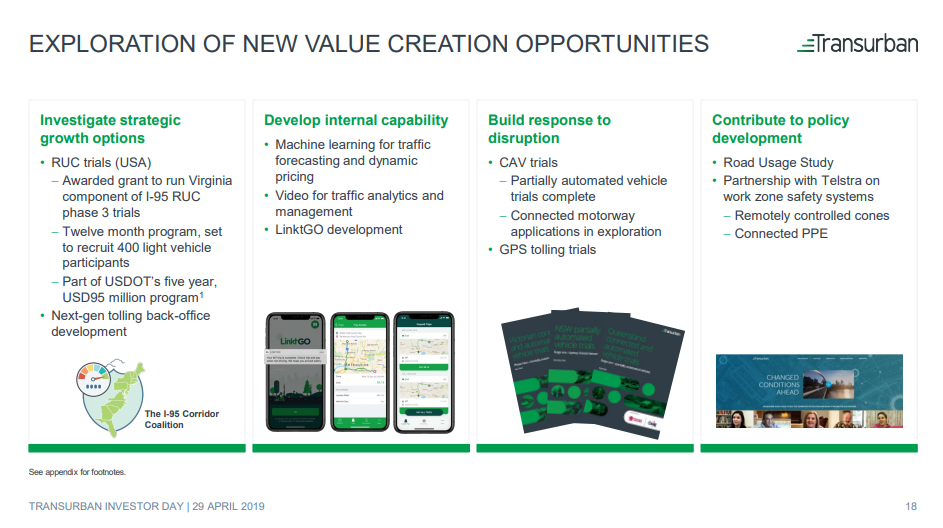 Recently, the company reported pricing of â¬350 million private placement of senior secured 15-year notes under its Euro Medium Term Note Programme. It was reported that the company completed pricing of 26 June 2019, and the settlement was expected to be completed by 03 July 2019. Transurban would be swapping the proceeds from the note issue with fixed rate Australian Dollars; this would be utilised to fund the development, general & corporate purposes.

On 21 May 2019, Transurban Group announced the dividend for six-months ended 30 June 2019. According to the release, TCL has announced a dividend of 30 cents per stapled security, which consists of a 28 cents distribution from Transurban Holding Trust & associates along with a 2 cents fully-franked dividend from Transurban Holdings Limited & associates. In addition, the recent dividend takes the total dividend for FY19 to 59 cents per stapled security, and 3 cents within the 59 cents is a fully-franked component.

InvoCare Limited (ASX: IVC) is a constituent of S&P/ASX 200 index. It is engaged in the business of providing hospitalities for the funeral, crematoria, cemetery and related services. Currently, InvoCare operates in New Zealand, Australia and Singapore.

In mid-May, the company released Quarter 1 performance update, which provided an indicative percentage growth on some key parameters for the quarter ended 31 March 2019 (unaudited). In the results, IVC reported that the soft market condition had been better on the back of several deaths returning to the normal long-term trend. In addition to this, it had been mentioned that the impact of 2018 acquisitions drove a positive performance during the quarter 1 period.

According to the release, gross sales revenue grew by 7.8% over the prior corresponding period (pcp). Also, operating EBITDA & operating margin were up by 22.2% & 2.5ppts over pcp, respectively. Further, the company also witnessed an increase of 9% over pcp on its operating earnings after tax. Moreover, InvoCare mentioned the reason for not providing full-year update being the hardship in accurately forecasting the winter data. Lastly, IVC expects to provide an additional update on performance during the 2019 InvoCare Half Year Results announcement in August.

Martin Earp, Chief Executive Officer of InvoCare, stated that improved trading had been witnessed in the quarter one, and the positive results reflect the growth strategies pursued in regional areas and strategies like protect & grow. He further mentioned that the company remains focused on meeting the evolving customer needs and profitably increasing the market share.

On the same day in mid-May, the Annual General Meeting was also conducted by the group. Concurrently, a presentation had been released by the company, which provides some background from the 2018 performance highlight. Further, it provides an insight into the strategies pursued by the company.

As per the presentation, InvoCare intends to tap the evolving needs of customers, which depicts an opportunity for the company. Also, the group would leverage this through $200 million Protect & Grow strategy; in addition to this, the company is committed to regional growth strategy and funding growth strategies.

Protect & Grow is a reinvestment strategy designed to contemporise the product offering of the group. Further, the company undertook important research and customer focus groups to ensure IVC meets future customer needs. In this regard, the renovated locations deliver the funeral home of the future with a focus on technology, space, light and facilities to the customers, and the Board also visited locations to review the renovations.

In 2018, the company deployed $73 million of capital to acquire eleven high-quality businesses in Australia and New Zealand. Please see below figure for the brands acquired. 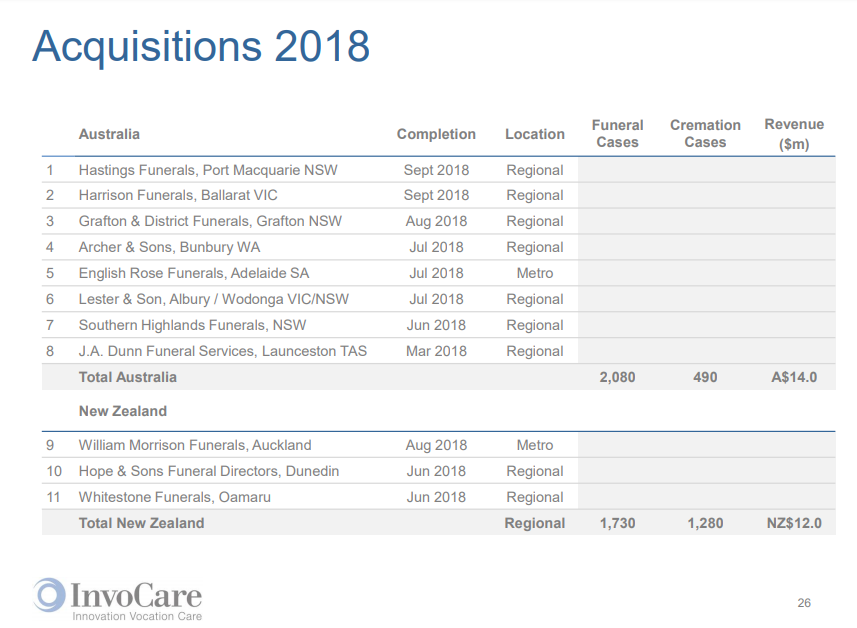 During March & April 2019, the company had actively raised capital from three sources being an underwritten institutional placement, share purchase plan and the Dividend Reinvestment Plan. Collectively, these three routes raised ~93 million. It was reported that the issue price for new shares depicted a discount of over 2.5% to the market price of shares prior to capital raising. Importantly, these funds would be utilised in promoting the growth strategies while also strengthening the balance sheet.

Sydney Airport Limited (ASX: SYD) is a constituent of S&P/ASX 200 index. It intends to deliver a world-class experience and improve the growth of the airport, and it connects to over 90 destinations across the world.

On 20 June 2019, the airport released Sydney Airport Performance May 2019. It had been reported that the number of passengers travelled through Sydney airport increased by 2.4% against May 2018. Further, traffic in the international passenger grew by 6.3 per cent to 1.3 million in May 2019 compared with May 2018. The domestic traffic witnessed a growth of 0.3% to 2.2 million passengers in May 2019 compared with May 2018.

As per the release, some new developments in the new flights included a daily service from Kuala Lumpur via Denpasar scheduled to start in mid-August by Malindo Air with a seating capacity of 162. Also, a seasonal Sapporo service would be commencing in mid-December with a frequency of three times a week by Qantas; it would operate in a seating capacity of 251 through to late-March.

On 24 May 2019, Sydney Airport reported that the decision from the Court of Justice of the European Union (ECJ) had incited to reconsider the status of indemnities offered by Sydney Airport Trust 1 (SAT1) regarding the sale of Copenhagen Airport.

The company also assessed the tax disputes covered in the indemnities by SAT1. Notably, ECJ decisions were not in this regard. As per the release, the assessment by the airport depicted that a few or total of the $119.1 million non-current receivable on 31 December last yearâs financial report, regarding the indemnity earlier remunerated might require to be spent on. Additionally, impending call on indemnities is probable to the highest amount of $61 million (as on 30 June this year).

Sydney Airport was considering ways to reflect this in the interim financial report. It also confirmed that even if indemnities are expensed or fully called; it would not impact materially to Net Operating Receipts in 2019 in upcoming years, and it would also not impact the distribution guidance of 39c per stapled security for 2019.