Virgin Money UK may have shocked markets, after a pretty decent result. However, it was inevitable that the bank would deliver such results to the markets, following decent interim results in FY 2019.

Prior to the PPI estimates, released earlier this year, the outlook was appearing very positive, and conceivably, the bank was vying to post profits by the year-end. Nonetheless, the unexpected increase in the PPI estimates took a toll on profits this time around. The bank witnessed an unexpected increase in the number of complaints as the deadline approached for PPI.

In late November, Virgin Money UK released its full-year results for the period ended 30 September 2019 (FY 2019). It was noted that a uniquely enabled banking brand has emerged after the combination of Virgin Money & CYBG.

The combined entity is a package of traditional banks and neo bank, proposing a unique value to tech-savvy customers as well as conventional customer base. As the group has been emphasising on the integration program, the business banking transfer approval (FSMA Part VII) was a key development, arriving earlier than anticipated.

With this approval, the group has the ability to initiate the integrations across the group products, allowing the customers to have a unique proposition with the bank. It would also allow the new-age bank to begin rebranding its activity and advance the platform integration activities with an objective to save costs.

The group has achieved some of its integration cost savings through managing senior position duplication, restructuring of office, branch footprints, and initiating non-duplication of suppliers. Consequently, the group generated £53 million of run-rate net cost savings in 2019 in a bid to achieve its goal of £200 million in net cost savings.

Predominantly, the industry-wide increased scale of information request, complaint related to PPI had shocked the group. And, the group is utilising its technological capabilities to deal with a genuine customer complaint in a short time-period with cost-effectiveness.

In FY 2019, the group recorded a total underlying operating income of £1,639 million, which was down by 3 per cent over the previous year. The decrease was primarily due to competitive stress that lowered net interest income, the subdued contribution from investment business, and unfavourable fair value movements in non-interest income.

The Underlying operating and administrative expenses were 6% lower compared to the previous year to £942 million within the guidance of less than £950 million by the group, reflecting the momentum in integration efforts.

The group has incurred a £385 million in provisions in Q4 related to PPI. As a result of PPI provision and acquisition costs, the group reported a statutory loss of £194 million for FY 2019.

At the year-end, the CET 1 ratio of the group came down to 13.3 per cent from 15.1 per cent while the total capital ratio was down by 0.5 pts to 20.1 per cent. And, this was despite major capital movements due to legacy conduct, restructuring and acquisition costs.

Brexit is impacting the economic outlook along with the general election, which is resulting in an increased number of possibilities, and in turn, driving an uncertainty. The group said its Board and management are emphasising that the business is prepared to mitigate any short-term volatility.

Brexit is crucial for the group’s business customers and the group’s relationship managers are helping businesses for the future plan. And, the group is dedicated to using Virgin Money brand for national expansion within its sector specialities and risk appetite.

The group believes that resolution of the ongoing Brexit-powered uncertainty is likely to drive lending and a positive rate outlook. Conversely, an unfavourable outcome would result in lower growth and additional pressure on the bank’s margins due to competition.

The group thrives on delivering the product and service diversity benefits like a large-scale bank complemented by customer experience with the innovation of neo bank. It is working with a number of group companies to launch reward and loyalty offerings. 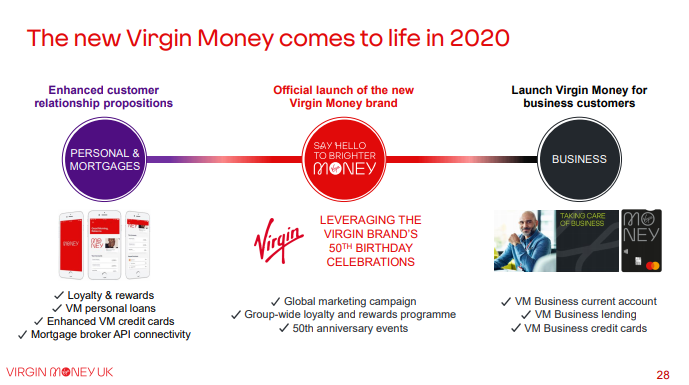 For FY2020, the group expects net interest margin in the range of 1.60 per cent to 1.65 per cent and anticipates narrowing variances in its front book and back book that would help its mortgage portfolio.

In costs, the group is determined to progress towards its ambitious net cost savings target of approximately £200m by FY2022, and it expects that underlying operating expense would be less than £900m in FY2020.

In capital, the group looks operate consistent with CET1 ratio operating level of around 13 per cent, and underlying capital generation would be used to fund capital requirements for restructuring and acquisition costs.

It was said that due to legacy issues, it was necessary to suspend the dividend for 2019, and the Board would reconsider the dividend in FY 2020 consistent with normal practice.

Further, the group is taking part in the Bank of England’s annual cyclical scenario (ACS) stress tests for the first time in 2020, and preparations are underway with published results anticipated in 2020.