Corporate restructuring is carried out by corporations to align their operations/segments in an optimally organised manner to achieve stated goals. It provides opportunities to unlock new capabilities, better shareholder value, optimal profitability, and ultimately an improved corporation.

Spin off is a type of disinvestment and is the formation of an independent corporation through sale of shares of a parent company and hence no longer controlled by the parent company. In these transactions, no money is exchanged, and no assets are revalued and therefore, is considered as a stock dividend.

These transactions are undertaken by companies after a thorough review of the existing business called a strategic review. A strategic review is conducted by independent advisors who provide necessary insights for a successful corporate restructuring.

As a result of spin off, the parent entity divests its segment, allowing the divested segment to operate independently with its resources, including human capital, assets, intellectual properties, liabilities, etc.

Oftentimes, these transactions result in highly successful organisations and the adverse case is also expected. Some of the successful spin off – ConocoPhillips spun off of its downstream assets that formed Phillips 66. Home Depot had offloaded its industrial supply segment HD Supply.

Upcoming Spin Off on ASX

Cardno operates as a global company engaged in infrastructure, environmental and social development with operations in over a hundred countries.

Cardno had announced plans of the demerger of Intega Group in its FY 2019 full year results release.

On 18 October 2019, the company reported that the Federal Court of Australia had given its approval for the scheme of arrangement. The approval from the court paves the way to complete the demerger of Intega Group Limited from the company.

The company filed a copy of the court’s verdict with the Australian Securities and Investments Commission on Monday, 21 October 2019, as a result the demerge came into existence legally.

Further, it is expected that the spun off entity would commence trading on ASX under the symbol ‘ITG’ on 22 October 2019, and the transaction is anticipated to be implemented on 31 October 2019.

On 10 October 2019, the company had conducted its Annual General Meeting, and a meeting on the Scheme Meeting related to the demerger.

Michael Alscher – Chairman of the company, addressed the Scheme Meeting. It was said that the company had evolved significantly through operational improvements & strategic acquisitions in the past three years.

The Board of the company had invested time to consider the strategic future of the company, emphasising to create optimal value for shareholders. The Board believed that the independent operations through demerger would allow both of the entities to achieve the stated goal.

Post demerger, Intega would operate as a Quality Testing and Measurement Business engaged in providing a range of services, including construction materials testing, associated environmental testing, geotechnical engineering, among others. 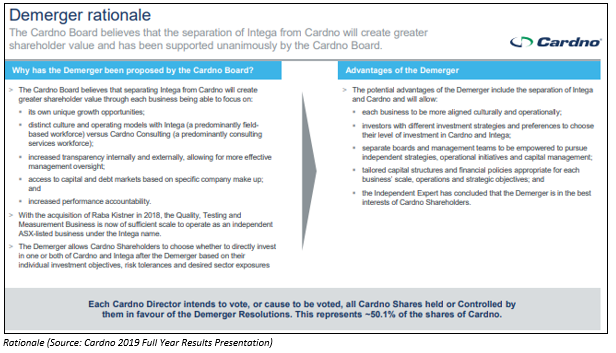 The transaction would allow both entities to deliver material shareholder value by focusing on:

More importantly, the Board had arrived into this consideration following a thorough review of alternatives to demerger. It considered maintaining the existing state of affairs and undertaking an initial public offering of Intega.

Further, it was concluded that the demerger is the optimal method to deliver the best possible value to shareholders. The Board considered the advantages, disadvantages and risks associated with various alternatives.

Further, the basic EPS for the period was -9.78 cents per share compared to -2.97 cents per share in the previous year. In FY 2019, the acquisitions of DDAI, Trilab, Raba Kistner and TGM were completed.

It was reported that the performance of the Americas division continued to improve with revenue up 14.3% over the previous year with EBITDA margin improving from 4.8% to 5.1%. The Asia Pacific division had witnessed revenues coming down by 4.1% over the previous year. The company had a non-cash write down of Asia Pacific goodwill associated with the acquisitions made before 2015, amounting to $46.3 million.