Corn breaks consolidation; reaches around US$400 over projected high consumption

Corn prices in the United States have improved substantially amid high consumption projections.

The ending stock for the period 2019 to 2020 is expected to decline amid a shortfall in China, which would eventually offset the high production globally. 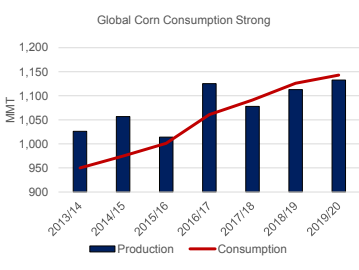 The high production of corn is expected to get consumed as corn import in many countries would mark a surge.

As per the estimation, China corn import would reach 7.0 million tons, up by 2.0 million tons as compared to previously projected level by the USDA amid high prices of corn in China’s domestic market, which would prompt China to look for more competitive prices.

As per USDA estimation, the import in Egypt is expected to inch up by 300,000 tons amid strong demand from poultry, dairy, and aquaculture; the final demand for the period of 2019 to 2020 is expected to stand at 10.0 million tons.

Iran corn import is expected to increase and stand at 10.5 million tons for 2019-2020, up by 1.0 million tons, as compared to the previously projected level amid high feed demand in the country.

Kenya and Mexico are projected to increase their import by 1.1 and 1.0 million tons, respectively to stand at 1.3 million and 18.5 million, respectively.

Given Kenya’s inclination to import white corn, which is produced by Mexico, the trade between the two neighbours are likely to increase.

Corns imports in South Korea, Turkey, and Vietnam is also expected to increase slightly as compared to the previous projections.

Apart from high imports, few countries have ample supply, which, in turn, would decrease the import from these countries. European Union and Indonesia is among the top, where corn import is expected to reduce by 3.5 million and 400,000 tons.

On the export side, the United States is expected to supply 58.0 million tons of corn, unchanged as compared to the previous projection from the USDA amid high price competition from Argentina and Brazil where exporting supplies are abundant.

Brazil is expected to export 34.0 million tons, and Russia would export 4.5 million tons. Among the exporters, the United States remains the highest exporter, and as the demand is projected to inch up in the global market, it is supporting the corn prices in the United States.