Creating a buzz in the market, consumer discretionary stocks have hit a record high in the S&P 500 during 2019. Stocks like Amazon and GoPro have been outperforming in the market, and market experts are anticipating a rise in their performances in the remainder of the year as well.

What is Consumer Discretionary stocks? Let us get to know them:

There are products which may not necessarily be vital for survival and could be non-essential, yet desirable by consumers. If the income of a person allows him to splurge on purchasing the not-so-essential items, based solely on his will to own them, are said to be spending on Consumer Discretionary products. These are of contrasting nature to consumer staple products, which are every household’s prime requisite.

These are greatly influenced by the economy’s state, and the measure of these products is an indicator of the economy’s economic and future performances. In a weaker economy, consumers do not spend on luxury purchases, which adversely affects the companies producing them. On the flip side, in strengthened economies, with boosted confidence and financial stature, consumers do invest in Consumer Discretionary products.

The Australian Securities Exchange regards the consumer discretionary stocks to be the most sensitive to economic cycles. The products of the group include textiles and apparel, automotive, leisure products and household durable goods. The services of the group include leisure facilities, media services and production, restaurants and hotels. The S&P/ASX 200 Consumer Discretionary Index operates with the code XDJ and in the last five years, it has delivered a price return of A$2456.56, delivering five-year annual returns up by 6.13 per cent (as on 3 July 2019). The maximum market capitalization of this sector has been ~A$40,999 million and the graphical depiction is showcased under:

Let us now look at a few stocks of the consumer discretionary group, listed on ASX:

In the light of this context, let us now delve into the recent updates and present stock performances of the four stocks of the Consumer Discretionary sector:

YTD return of WEB, ALL, HVN and WES (Source: ASX)

As seen in the above comparative graph, all the four stocks under discussion have decent YTD returns, wherein WEB’s stocks have yielded 25.21 per cent, ALL’s stocks have delivered 42.26 per cent, HVN’s stocks have generated 29.11 per cent of YTD while WES’ stocks have given yield 17.90 per cent. Let us now look at the recent updates and detailed performance:

Company Profile: A digital travel business tapping the global consumer markets through B2C and wholesale markets through B2B, WEB has been an online innovator since its inception in 1998. WEB is the first Travel Services Aggregator technology of the world and leads the blockchain innovation. It was listed on ASX in 1997 and has its registered office in Melbourne.

Investor Session: On 18 June 2019, the company conducted an Investor session: ORD Minnett wherein it introduced Rezchain and Rezpayments. Rezchain is a part of WEB’s B2B division, WebBeds, and is the first travel company to possess an operative blockchain. Rezchain would ease the payment procedures between hoteliers and travel partners. Rezpayments, on the other hand would aid the company in reduction of compliance costs, while improving control.

FY19 Guidance: The company is on target to deliver at least $120 million EBITDA in FY19 period.

Company Profile: Licensed in around 300 gaming jurisdictions, ALL is functional in over 90 countries. It provides products and services related to the gaming sector and is regarded as a global games powerhouse. The company takes creativity, innovation and technology into consideration and its existence dates to 1953. Quite recently, that is last year, the company acquired Big fish, to diversify its existing digital portfolio. The company was officially listed on ASX in 1996 and has its registered office in New South Wales.

Half-yearly Presentation: On 23 May 2019, the company released its financial results for the half-year which ended on 31 March 2019. As per the reports, the company’s NPATA amounted to $422.3 million depicting a growth of 16.8 per cent on pcp ($361.5 million was delivered in the six months to 31 March 2018). The company stated that a major onus of this growth was on the good performance in the ANZ region.

On the outlook front, the company expects additional 100bps to 150bps drop in the effective tax rate, compared to FY18. 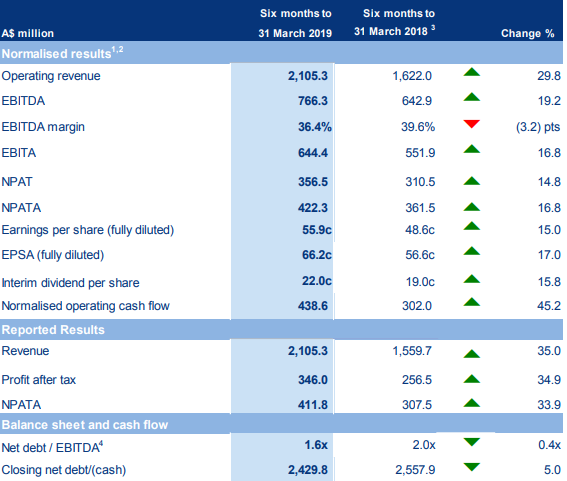 Company Profile: An Australian retailer, with principle activities includes catering to the integrated retail, franchise and property fields. It caters its franchisor services across New Zealand, Slovenia and Ireland. HVN is also into the business of Property investment, Media placement, and providing provision of consumer finance. It was listed on ASX in 1987 and has its registered office in New South Wales.

New on Board: On 27 March 2019, the company appointed John Craven as an independent non-executive director, to its Board, with immediate effect.

Half-yearly Results: In February this year, the company published its report for the half-year period to 31 December 2018. It reported that net profit after tax and non-controlling interests for the period was $222.77 million, up $15.08 million or 7.3 per cent from $207.69 million in pcp.

Company Profile: A player from the retailing group, WES’s business covers home improvement and outdoor living; office supplies; apparel and general merchandise along with an industrial division that has businesses in the field of chemicals, energy and fertilisers, and industrial and safety products. Listed in 1984 on Australian Securities Exchange, the company has its registered office in Perth.

Strategy Briefing Day: On 13 June 2019, the company presented at a Strategy Briefing Day in Sydney. In the released presentation, the company stated that in FY19, it had successfully conducted the demerger of Coles and Divestments of Bengalla, Kmart Tyre & Auto and Quadrant Energy. It had also agreed to acquire Kidman Resources (ASX: KDR). In this regard, KDR notified on 3 July 2019 that a Scheme Booklet would be sent to KDR’s shareholders in August this year and voting on the Scheme would take place in early September this year.

WES reported on the Strategy Briefing Day that it was expecting the FY19F interest expense to be in the range of $170 million to $180 million. The final dividend for FY19 would reflect earnings from continuing operations, with Coles to declare a separate dividend. 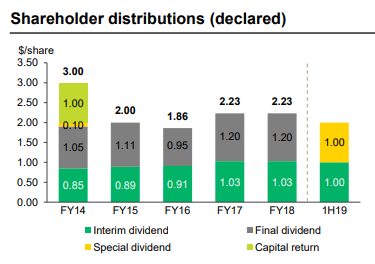