The Australian cobalt mining companies are particularly gaining attention of global investing community amid its potential to provide a clean and ethical supply of cobalt, a quality currently lacking in the largest resources holder- Democratic Republic of Congo, over its unethical practices such as child labour, volatile mining policies - increase royalties, and labour abuse.

To Know More, Do Read: Tesla and Others are Back for Cobalt; Australian Mines’ Sconi Project To Lead the Australian Front?

When it comes to Australia, many projects for cobalt are in the pipeline, and one such project is Sconi Project- own and in development by Australian Mines Limited (ASX:AUZ). AUZ also holds many other cobalt prospects

The expected supply is also projected to be sufficient for at least 3 million to 6 million electric vehicle battery packs. The pre-feasibility study for the project is decent with expected cash flow after tax of $5 billion in 30 years along with a payback of 4.4 years and 5.8 years on pre-tax and post-tax basis, respectively.

The net present value (NPV) on a pre-tax basis is predicted by the company to stand at $1.47 billion.

AUZ terminated an initial offtake agreement for Sconi prospect with SK Innovation during the December 2019 quarter, as a few conditions related to the terms of the offtake were not satisfied by the deadline.

Post the termination of the offtake agreement with SK Innovation; AUZ kickstarted offtake negotiations with a number of interested 3rd-parties; however, terms of the agreement are not disclosed yet amid strict non-disclosure agreements.

During the first half of the year 2019, AUZ processed additional bulk samples of ore from Sconi in its scale processing plant in Perth, WA. The work further confirmed the ability of the company to reliably ore from Sconi into final battery-grade cobalt sulphate and nickel sulphate chemicals.

AUZ has been working with a number of companies on R&D projects to widen the industrial and commercialisation opportunities for its scandium oxide from Sconi prospect and now have a firm understanding of the processing flowchart of the prospect.

Under the term of royalty agreement for Bell Creek and Minnamoolka prospects, any decision to develop both the prospect would follow the production commencement at Sconi.

The Cobalt-Scandium prospect of the company is in New South Wales and hosts 2.5 million tonnes of Mineral Resource at 0.103 per cent cobalt and, 403 parts per million scandium in the JORC 2012 classified Measured Resource Category.

Under the JORC classified Indicated Category, the prospect holds 0.2 million tonnes Mineral Resources at 0.076 per cent cobalt and 408 parts per million scandium.

During September 2019 quarter, the Company received the final assay results from its resource expansion, which further confirmed the continuity of a high-grade zone at the western continuation of the previously established cobalt, nickel and scandium mineralisation. The confirmed mineralisation extends 1,200m west from the existing Mineral Resources.

AUZ initiated additional drilling in December 2019 quarter at the prospect and results from this drilling program is pending; however, the Company anticipates the assay result to update the Mineral Resource estimate for the prospect further.

The cobalt prospect is at an early-stage exploration in NSW, and the Company completed surface geochemical sampling programs, which further suggested elevated cobalt within the project area. AUZ also identified a priority target at the prospect as it demonstrated geophysical characteristics of sulphide mineralisation.

While AUZ holds various prospect related to cobalt, it plans to put a hiatus on the development for many prospects, except Sconi, for which the Company plans a successful development over the short-term.

The detailed ore reserves estimate as below: 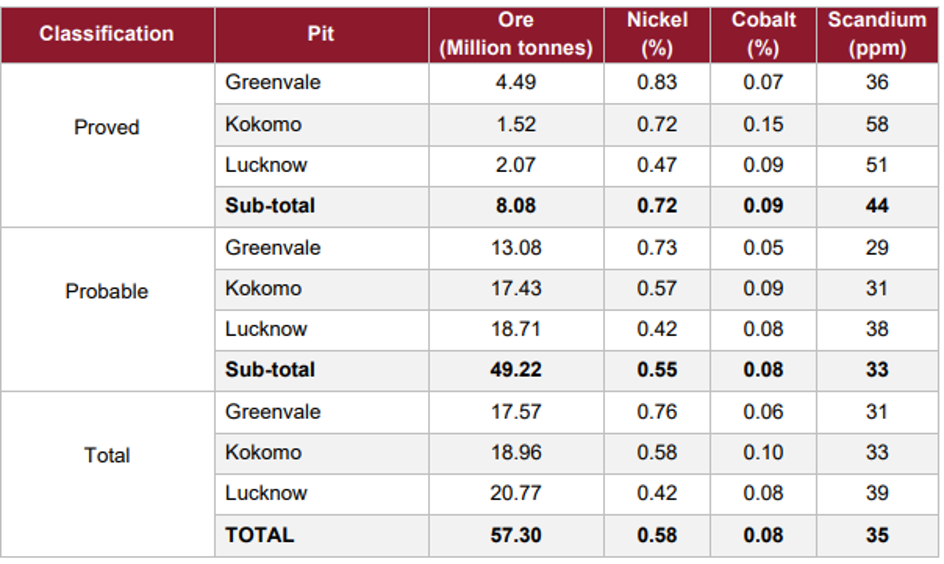 The stock of the company last traded $0.015, unchanged as compared to its previous close on ASX.