The global economy is currently facing the darkest times since the Great Depression (1929-1933) as coronavirus pandemic has infected millions, and taken away hundreds of thousands of lives with few economies still struggling with its spread.

As China successfully recovered from COVID-19 pandemic, it took measures to reopen its economy. The world is in great anger towards China for letting the virus spread across and delaying the release of COVID-19 outbreak related information to WHO, which could have taken immediate steps to suppress it. The virus has established, a be careful of China approach, amongst major economies in Asia, Europe, and the US.

President Donald Trump has been crisp on forcing American industries to break out from Chinese production chains for goods manufactured for America. US-China relationship has further strained and turned aggressive amid the pandemic.

China is way off the mark in fulfilling Phase 1 deal wherein,  it agreed to undertake USD 200 billion of additional purchases of US goods and services by the end of 2021. It has just bought USD 30 billion compared to USD 55.5 billion of American imports, it was supposed to buy, from January to April in 2020. US trade deficit with China has narrowed to USD 53.9 billion in Q1 due to decline in demand by the US and China’s disruption in production.

Several African countries have objected the Chinese camouflage of virus, as China chased its global expansionist programs into Africa. Countries like Turkey, Spain and Netherlands complained that the testing kits and face masks imported from China were of Inferior quality.

While the UK is wary of takeover plans of companies by China due to coronavirus induced lockdown, Japan has already started shifting the production bases of its companies from China by offering $2 billion to Japanese companies. The fund ($2 billion) has been allocated to assist firms in bringing back operations to Japan or move them to some other place.

Political tension between Australia and China exacerbated after Australia called for an international inquiry into the origins of coronavirus and its spread. The Chinese Ministry announced 73.6% anti-dumping tariff and 6.9% subsidy to all Australian barley imports along with ban on exports of beef from 4 Australian shambles in May.

China threw 2 more trade-related sanctions last week in June. While China’s Ministry of Culture and Tourism cautioned against travelling to Australian region because of substantial racist incidents happening with people from China and Asia. Ministry of Education of China cautioned its students and told them to reassess their decision for studying in Australian universities.

However, PM Morrison has denied the assertion of racial attack. Rather Australia filed a protest with Chinese foreign ministry in Beijing and Chinese embassy in Canberra about China’s travel and student education related threats. Morrison stated that Australia offers finest education and tourism products in the world, and he is quite assured on the desirability of his product.

Chinese outbound direct investment (ODI) has decreased sharply in 2019. M&A data by Baker McKenzie and Rhodium Group has shown a fall of 29% from USD 80 billion to USD 57 billion in developed economies. Chinese ODI in EU has fallen by 33% to 11.7 billion euros while Chinese FDI was USD 5 billion in 2019, down by USD 5.5 billion from the previous year.

The drop in Chinese investment has been due to below-mentioned reasons. 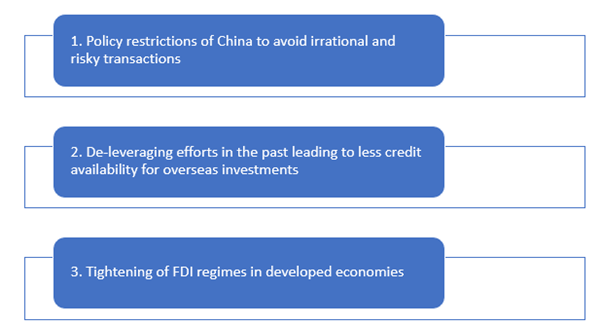 FDI regimes are expected to tighten further in coming years, as governments are increasingly getting concerned about their infrastructure, technology and other asset considered as vital for the national economic security and prevent unprincipled acquisitions of companies at undervalued prices.

The US had announced Economic Security strategy in 2019 to reduce dependence on China by expanding and diversifying supply chains.  In April, the US had been in talks with India, Australia, Japan, NZ and South Korea on supply chains.

As per Keith Krach, US Department of State official, an Economic Prosperity Network is being built with like-minded allies for essential products. The industries would include medical devices, aerospace, textiles, pharmaceuticals, etc. However, the idea does not have any firm foundation yet.

ALSO READ: Are We Prepared for a Trade War with China?

The economic fallout arising due to coronavirus has forced global economies to become self-sufficient and search for alternatives to China. Nations like Taiwan and Japan are moving out of China on their own to shift production from Chinese land.

A senior executive at Fitch stated that many economies are adopting ‘China plus one’ manufacturing hub strategy since the beginning of the US-China trade dispute in 2018 with Vietnam as the clear beneficiary.

Nevertheless, shifting from China will not be easy, as China brags of huge annual manufacturing output that even a bunch of countries together would have to make a lot of effort to take in even a fraction of it. Also, moving supply chains would become harder when the world comes out of coronavirus due to low cash flow, change in business climate and employees working from home.