Mining, manufacturing and agriculture are important, but they are not the only vitalities of an economy, especially when we talk about a diverse economy like Australia. With the world, transitioning into a tech-savvy environment, Fintech companies (the ones which use technology to enhance/automate the delivery and use of financial services) have emerged victorious in terms of providing innovation, encouraging employment and contributing largely to the GDP.

For a budding economy like Australia, which is technically advanced, financially sane and bears good employment options, Fintech companies have been on a rise since the past few years. The sector is believed to have generated almost ~140 billion in Australia’s GDP, given the firm hold of the financial sector in the country. In our article on Australia’s economy in the past century, we discussed that the banks have remained to be one of the biggest boosts to the country’s growth. Australia’s Big Four Banks are world-class amid the availability of investment funds.

Australia continues to attract financial stakeholders towards its rich pool of fintech investing options in the transparent market, which has a steady regulatory system and low risks. Toppled by the firm legal system and especially the present Royal Commission era, investors and traders prefer to take advantage of the country’s dominance in the sector. The presence of Australia in the Asia-Pacific band is perhaps the biggest factor bearing the fruits of sector. Experts believe that the global economic shift is happening towards countries like Singapore, Japan and Hong Kong, from the US and Europe. And why not? These countries have great economies, multinational companies, sound taxation and regulatory systems, a firm legal scenario and low taxes. As an add on, Australia has the advantage of language, along with the other factors discussed above. Hence, it is safe to state that Australia can maximise its stance in the Fintech sector, if the tax reforms are lucratively designed and prevailing dual listing of companies is unitised.

Given this backdrop, it would be interesting to unveil the updates and stock performances of the 5 Fintech companies, listed and trading on the Australian Securities Exchange:

An innovative and tech-savvy manager of investments, PPS provided its financial results for FY19 on 12 August 2019. The company has a 25% increase in platform FUA, to a record $9.5 billion. The total FUA was $16.1 billion, up by a whopping 108% on pcp. The revenue was up by 5% at $45.1 million and the EBITDA was $11.4 million, up by 29%. The NPAT stood at $2.5 million, zooming up by 80% on pcp. Besides, PPS won quite a few awards in the year, few of them are titled- International Platform of the Year and Innovation Award. 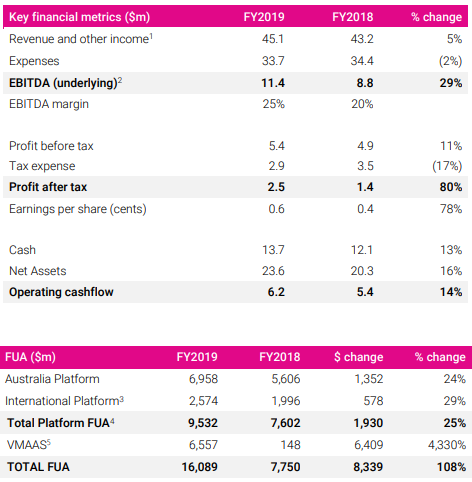 The company administers over 500,000 investor accounts covering over $140 billion in funds worldwide. The year 2019 witnessed a solid progress and was full of growth-initiatives. The upgrade to the Integrated Managed Accounts Platform in February was a major driver in expanding PPS’ addressable markets, with the Australian market expanding to $858 billion from $21 billion. Despite the reduction of interest rates by the RBA, PPS’ netting benefit depicted an average 20% drop in the costs of brokerage for investors.

A financial services company in PNG, KSL released the results of the AGM or Annual General Meeting on 21 May 2019.

The CEO of the company stated that during the year, KSL’s customer numbers grew by 25% to ~21,000 and the deposits grew by 29% to PGK 1.3 billion, while the loans and advances grew by 20% to PGK 851.7 million. The forex income rose up by 373% to PGK 34.2 million. The NPAT was recorded at ~PGK 48 million. The company successfully acquired ANZ PNG’s Retail, SME and Commercial businesses. Post completion of the project, which is expected in September 2019, KSL would become the second largest retail bank in PNG. In the fintech context, KSL’s automated systems and processes upgraded the company’s efficiency, and provided an e-switching option as well.

A specialist in asset management, corporate advisory and equities, MOE held its AGM 2019 on May 2 2019. The company completed a decade of operations, and since commencement in 2009, it has built a Corporate Advisory & Equities business steering more than $98 billion of transactions. The Asset Management business that at 31 December had $3.7 billion of AUM. Moreover, the company added ~40 full time employees in FY18. The revenue was recorded at ~$136.2 million, up by 27% on pcp resulting in an EBITDA of ~$57.4 million, which was up by 38%. The NPAT of ~$39.2 million was up by 35%, and the company was able to pay a dividend of 8 cents per share to its stakeholders, up by 14% on pcp.

The Asset Management division grew to contribute EBITDA of $52.5 million, up by 48%. The AUM increased by $800 million in 2018, providing a firm platform to grow the company’s recurring revenue streams. The Revenue in our Corporate Advisory and Equities division was $51.5 million, and the net assets were recorded at ~$241 million. The Moelis Australia Foundation had raised more than $4.8 million in the last two years and was distributing funds to charities.

A tech-driven payments company, APT is a leader in the ‘Buy Now, Pay Later’ policy. The company would conduct an Afterpay Day from August 14 to 15. The days would have sales by top fashion and beauty brands and retailers, that offer Afterpay. In the last Afterpay Day sale in March 2019, the business witnessed more than 400 US retail partners take part with an average upsurge in the sales volume of over 110%.

Let us now acquaint ourselves to the current trade behaviour of these companies on ASX, after the trading session, on 12 August 2019: