Coronavirus impact has begun to trickle down on house prices with property prices falling for the first time since June 2019 as the coronavirus pandemic takes a toll on sales. However, the house prices in Australia are still softer than the predictions amid coronavirus induced economic contraction. The actual test of the housing prices will arise in September when the policy stimulus support by the government, including JobKeeper Payment, comes to an end.

As restrictions have eased for on-site auctions, sellers are hesitant while buyers are vigilant even when the number of properties is there in the market. Preliminary results from CoreLogic state that from about 867 capital city homes listed for auction in the past week, 65.9% were sold.

Housing values lower in May

Property Market leader CoreLogic Home value index for May show that monthly dwelling values dropped for the first time since last year. The national index witnessed a fall of 0.4% during the month, showing the damage to the property market has been much lesser than projected by experts with relaxing of restrictions.

Tim Lawless, CoreLogic head of Research stated that a drop of less than half a per cent in housing values over the month is an indication that the market has stayed buoyant to a material correction taking into consideration weak economic conditions.

He added that before Easter, the property market agent activity was about 60% lower than during the same time in 2019. Agent activity has been rising with the number of reports generated by the agents increasing by about 45% since April end reflecting a rise in listings.

Amongst state capitals, Melbourne declared the largest fall in May, a reduction by 0.9% to a median value of $686,798. About five of the eight capital cities recorded a drop in values with combined capital cities experiencing a fall of 0.5% in May whereas combined regional areas held steady. 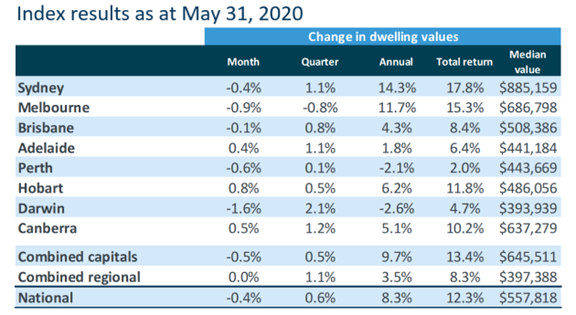 Darwin was the weakest capital city with prices down by 1.6% in May. However, it was the first to significantly lift the coronavirus restrictions while Hobart had the most substantial monthly gain of 0.8% despite witnessing one of the steepest falls in rents in the past two months.

The reduction in values over May comes as transaction activity in the market indicates more upbeat signals. CoreLogic’s prediction of sale activity recovered by 18.5% in May after a drop of 33% in April.

While a few regions have prevented a drop in values ever since March, every region has lost impetus. The long-term outlook remains ambiguous as the stimulus provided by the government will end at some point while the mortgage holidays will run out.

CoreLogic Head also states that if the government withdraws its stimulus programs, housing prices could suffer even more downward stress if economic conditions do not improve during the end of the year.

Ms Eliza Owen, CoreLogic head of Research, noted that while transactions were up, total stock for sale on the market was down by about a quarter from that in 2019. A lot of people are not selling at present that reflects bank policies where they have offered mortgage pauses. This has left property prices more resilient to an economic downturn. Nonetheless, these mortgage repayment holidays apply for three months with an option of a further 3-month extension at the choice of the bank implying most are scheduled to end in September or October.

She anticipated that several lending institutions had offered such excuse on mortgage repayments and once they end and there is no consistent improvement in the labour force that would imply more distressed listings in the market.

September would be the real test for the market, although offers by banks for buyers to switch or extend interest-only mortgage payments could provide a buffer. She added that a substantial fall in migration left the housing market in Melbourne, particularly exposed as it has a higher base to fall from and is a relatively expensive market.

A further stimulus for the construction and property market

Scott Morrison had communicated that he and the Treasurer Josh Fyrdenberg are forming a plan on new stimulus measures without revealing the details. The residential construction industry and the arts will be the new emphasis on the stimulus by the Australian government.

CBA economist Kristina Clifton has noted that there is a possibility that both Commonwealth bank and state governments would introduce further policies to promote the construction and the property market.

She stated that the Federal Government is expected to announce first home buyer grant of at least $20,000 towards newly constructed homes. There are also reports of a potential cash grant for people who are interested in renovating their dwellings.

Despite a relatively softer fall in housing prices than projected number can give an impression of the Australian housing prices to hold up in coronavirus induced recession, but the real test will be in September when government stimulus ends.