When a country has an AAA rating on the sovereign papers, it is apt to borrow aggressively to fund the massive fiscal stimulus that has been introduced by the Commonwealth of Australia. Since economic contraction is making its way into the country, Australia’s AAA rating could be at risk, and downgrades to sovereign rating will shoot up the borrowing costs.

It is not just Australia that has been borrowing. Most of the countries across the world have launched sovereign debt issuance programs, primarily to fund the fiscal programmes that were launched in the face of COVID-19 crisis.

Interest rates are at low levels, which also allows the Governments to borrow cheaply as well. The Government has introduced some of the wildest fiscal stimulus packages compared to the rest of the world.

At the same time, State Governments have introduced their stimulus packages as well, which will also need funding from the markets, among other sources. Public revenues may likely face contraction as economic activity is weakening, which could lead to deficits in projected revenues of the Government, inducing the policymakers to borrow more.

Resumption of economic activity is very vital that would make a floor for a smooth path of recovery. It is great to see that Australia has flattened the COVID-19 curve and economy is moving towards normalcy gradually.

A complete resumption of the economic activity will take time as the process to attain normalcy is a staged one. Since most of the countries are still in shutdowns and the timing of returning to normalcy varies across jurisdictions, it will likely create an asynchronous world – meaning that demand, supply, factors of production etc. may not return to pre-COVID levels concurrently.

For instance, countries with large migrant workforce may face difficulties if workers have left for their home countries as stringent international travel restrictions are implemented. Meanwhile, some workers may not choose to return to the other country.

There remains an air of uncertainty around how consumer spending will look like in the post-COVID world. However, it is likely to be lower compared to the last year as unemployment have been soaring across the globe.

When consumption is pegged to a lower level, the production of goods by the manufacturers will decrease as well. Moreover, weak economic activity means possibly lower taxation revenues for the Governments.

In March, the country recorded a trade surplus of $10.6 billion in good and services, on a seasonally adjusted terms. In the three months to March 2020, the surplus amounted to $19.51 billion, showing an increase of $4.89 billion sequentially (seasonally adjusted).

Exports of goods and services increased by $5.56 billion, an increase of 15 per cent over the previous month, primarily driven by non-rural goods, which included metal ores, minerals, mineral fuels, coal, and coke, among others.

Import of goods and services fell by 4 per cent to $31.8 billion in March on a seasonally adjusted basis. Among the movers, the services imports contracted by 19 per cent or around $1.5 billion driven by travel and transport while the imports of capital goods fell by 3 per cent or $194 million.

In 2018-19, the total tax collections of the country totalled around $560 billion, an increase of $31.2 billion compared to the previous year. The increase in the tax revenues was primarily driven by income taxes, capital gains and property. 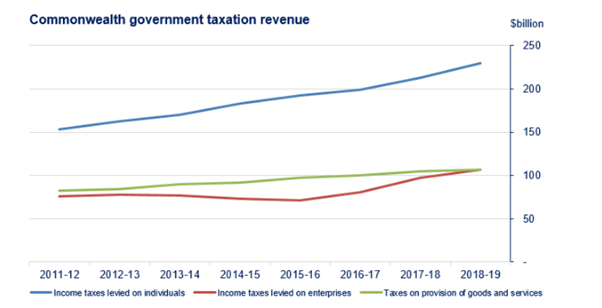 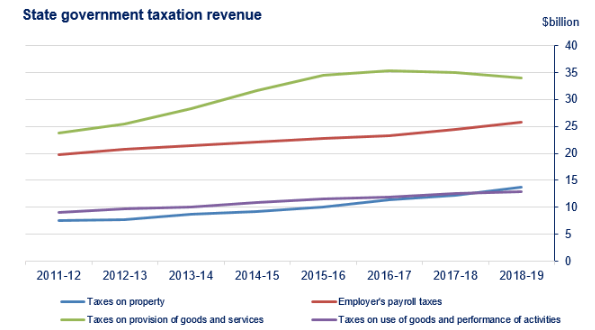 And the borrowing continues…

Earlier, the agency has clarified that it would not be able to provide an exact number for the planned borrowing before the official budget update. Instead, the body is issuing tenders weekly for which bids are submitted by the market participants.

During most of the weeks, tenders are expected to be to the order of $5 billion. AOFM will also launch new maturities of 3-5 years and 10-12 years, but not in this financial year, which ends on 30 June.

Today, the finance manager has completed the pricing of 1 per cent December 2030 Treasury Bond - which is settling on 21 May 2020  - implying a maturity of 10½ years. AOFM reported that the bonds are priced at a yield of 1.025 per cent. Despite the issue size being $19 billion, the bond attracted bids of $53.5 billion.

Next week, the agency is launching tender for the 2.75 per cent April 2024 bond, and the offer size is $2 billion. Along with this bond, it would also launch tender for Treasury Notes maturing in August 2020, September 2020, November 2020, and March 2021 for a cumulative issue size of $5 billion.