BNPL Players Become Attention Seeker of the Week, Read How!

As the RBA considers changes that could potentially damage BNPL (Buy Now, Pay Later) service providers’ businesses in Australia, the major player in the market Afterpay Limited (ASX:APT) has opposed the central bank fiercely over implementing a regulatory framework that would restrain innovation. The service provider submitted an argument to the RBA claiming Afterpay competes with tech giants like Google and Facebook instead of card providers.

One the one hand, the RBA and Afterpay have butt heads over regulating the BNPL financial services space, while on the other hand, a new player named bundll has marked its entry into Australia. Cutting a long story short, the fast-growing BNPL market has continued to garner investors’ interest for one reason or the other.

With the use of paper-based payment methods declining substantially, BNPL services are increasingly become popular in the nation, becoming a lower-cost and convenient alternative to consumer credit. Such services have now been widely accepted by merchants in numerous retail segments - in person and online.

The growing importance of electronic payment methods over the recent decades has paved the way for several fintech companies operating within and outside Australia to join the ASX platform.

Let’s catch a glimpse of some recent updates announced by the ASX-listed BNPL players that is gaining investors’ attention: 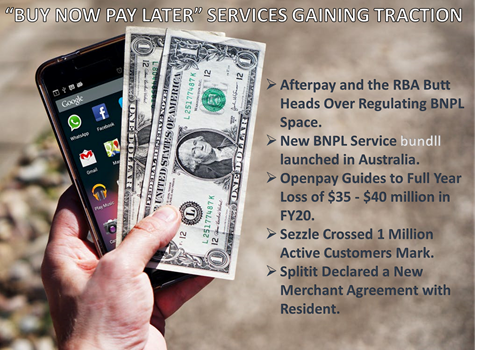 A well-established player for BNPL payment solutions in the international market, Openpay Group Ltd (ASX:OPY) is the latest BNPL player to mark its entry into the ASX.

Though Openpay’s stock has failed to deliver positive returns since its listing on the ASX on 16th December 2019, the BNPL service provider has managed to deliver strong growth in Total Transaction Value (TTV) numbers in January 2020.

The Company has recently reported a growth of 86 per cent in TTV and 58 per cent in revenue on the prior corresponding period (pcp) to $15.7 million and $1.9 million, respectively in January 2020. Moreover, its largest retail merchant, Bunnings improved their TTV with Openpay by 150 per cent in December 2019 relative to December 2018.

Despite reporting strong January numbers, the Company expects to deliver a full year loss before tax in the range of $35 to $40 million.

The Company has recently launched into the B2B sector via an inaugural agreement with Woolworths Group Limited (ASX:WOW) for its new Software-as-a-Service (SaaS) portal, Openpay for Business. To fund the development of its SaaS product, it has invested in major growth driving levers.

FlexiGroup Limited (ASX:FXL) has recently announced the launch of world’s first “Buy EVERYWHERE and Pay Later” offering, bundll to the Australian consumers. The Company considers this BNPL product as the next advancement in consumer finance, which can be used everywhere.

Available to download from the Google Play Store and the App Store, bundll signifies an entirely new category in the BNPL sector as transactions are not being restricted by merchant integration.

The new product has expanded BNPL spend for daily items, with zero-interest purchases in groups usually reserved for debit card expenditure like groceries and petrol. bundll customers can shop online as well as in-store, with no minimum spend.

Moreover, it is the only BNPL product that can accelerate numerous payments up to $1,000 at any retailer which accepts Mastercard transactions, assisting consumers with their daily spending.

US-headquartered Sezzle Inc. (ASX:SZL) has surpassed the one million mark for Active Customers, reaching a pivotal milestone. The Company’s achievement is being considered as a testament to the value its users see in its product.

The Company secured its 500,000th customer in August last year, about three years since its launch, but took less than 6 months to achieve this milestone, reflecting the accelerating of growth of its platform.

At the end of the 2019 fourth quarter, the Company’s pool of merchant partners also grew past 10,000 mark, signalling that both customers and merchants have turned to Sezzle as their preferred BNPL payments solution.

The Company intends to make Sezzle as the far-reaching, most dynamic and trusted payments platform across the world.

Though the Company secured over 50,000 customers in the last six months, its stock has delivered a negative return of about 18 per cent during the period. SZL closed the trading session at $1.835, with a fall of 0.54 per cent (As at 11th February 2020).

Splitit Announced a New Merchant Agreement with a US Retailer

A leading monthly instalment payments solution business of the world, Splitit Payments Ltd (ASX:SPT) has recently announced a new merchant agreement with an online retailer in the US, Resident Home, LLC to offer Splitit’s solution at NectarSleep.com to all of its customers.

Resident, the online retailer of furniture in the US, will be adding up Splitit instalment payments on the American website of its flagship brand, Nectar, with the objective of launching on its additional brands in the near future. In 2018, Internet Retailer magazine named Resident as the North America's fastest growing eCommerce retailer.

The agreement represents a new relationship for the Company in the North American market and demonstrates its continued success in drawing influential brands in North America and additional progress in building high value merchants in core categories.

SPT closed the trading session in red territory on 11th February 2020, closing at $0.510. The stock has delivered a negative return of 21.8 per cent on a YTD basis.

But, Afterpay Continues to Lead!

Though many BNPL players have expanded their presence in Australia, Afterpay has continued to remain the most favourite stock in this field to the majority of investors.

Since getting listed on the ASX in June 2007, the stock has delivered a substantial return of over 1300 per cent (As on 11th February 2020). In fact, the stock has managed to generate a return of more than 120 per cent in the last one year.

The Company had over 6.6 million active customers as at the end of November 2019, with more than 22,000 new customers joining the Afterpay platform per day during November. Moreover, its merchant portfolio have continued to expand with about 42.5k merchants offering Afterpay to their customers in November.

In a nutshell, one can see a growing competition in the BNPL space in Australia, with already existing players focussing on breaking new ground and many new players planning to kick things off.