Australian iron ore miners are likely to enjoy the leverage due to high prices of the steelmaking raw material in the international market, amid supply shortage and strong demand.

The supply disruption started when Brumadinho dam collapsed in Brazil in February 2019. The dam used the iron ore from the mine of Brazilian mammoth- Vale, which in turn, marked a ban on its Brucutu mine, and put the company in shackles.

The ban was followed by the suspension of Vale’s operations, which created a production loss in the international market. In the recent comment at the Barcelona summit, Vale mentioned that it would take tenure of 2-3 years to restore the normal production level of 400 million tonnes a year.

The suspension on activities and a production halt on operative mines of Vale created a 90 million tonnes output loss in the international market.

Soon after the market discounted the production loss in prices, another event widened the supply gap. The Tropical Cyclone Veronica hit the Pilbara Region, which in turn, forced the temporary shut down in operations of significant Australian iron ore miners such as Rio Tinto, BHP Billiton, Fortescue Metals.

On the demand side, China marked a fall in steel inventory, which led to the prices of steel up in the market. The high prices of steel prompted mills to ramp up the steel production and take advantage of high steel prices. The rush among mills to gain from steel increased the demand for iron ore.

Owing to such production losses coupled with high demand in the global market, the iron ore prices are inching up from February 2019; the prices jumped till US$108 in the international market yesterday.

The rise in the commodity prices also pulled the strings of iron ore miners, and these miners enjoyed a bull run. The share prices of Rio Tinto breached above A$103 and marked a 52-week high. 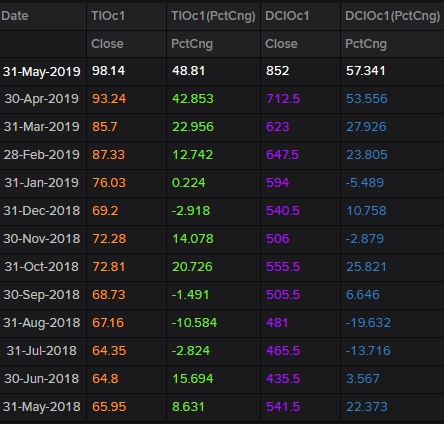 The attractive returns on the benchmark indices pulled up the strings of iron ore miners; three significant miners have delivered a lucrative rate of returns on yearly basis, as depicted in the chart below. 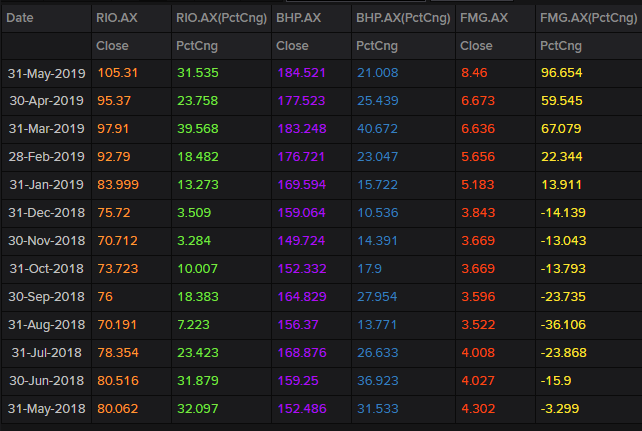