The emergence of fintech companies is currently shaping the financial sector in Australia with its unique offerings to the customers. In less than a decade’s time, we have seen several Australia based fintech companies expanding its services and operations to multiple countries.

Here we shall discuss three ASX-listed companies and their performance during recent time.

As at 31 December 2019, VGI has $3.1 billion worth of funds under management (FUM) which grew from $2.6 billion at 30 September 2019. VGI believes that the increase in its FUM is influenced by the IPO from VGI Partners Asian Investments Limited (ASX:VG8) that raised around $557 million in mid-November 2019.

Fast forward to 10 January 2020, FUM for VGI had further increased to approximately $3.2 billion as an effect of fund performance. VGI is of the strong view that its global strategy funds are currently above the high watermark.

The performance fee is the fee paid to an asset manager or other investment advisers whose investment decisions help to generate positive returns.

For VGI, Performance fees are recognised in the accounts of VGI Partners Limited on a crystallised basis (typically crystallised at 30 June each year, with a smaller proportion crystallised at 31 December each year); i.e., as and when they become due and payable.

ASX Listed Fintech company, Wisr Limited (ASX:WZR) is Australia’s first neo-lender which engages in delivering a smarter, fairer and wiser collection of financial products and services with a commitment to the financial wellness of all Australians. 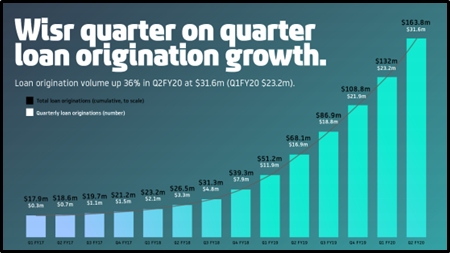 One of the prominent industry performer in the digital retail finance and payments, Zip Co Limited (ASX:Z1P) offers POS (point of sale) credit and digital payment services to industries such as retail, education, health and travel. Z1P through its brands namely, Zip Pay, Zip Money and Pocketbook is focused on offering consumer products which are fairly priced.

The company follows a dual revenue model dependent on both retailers and customers, wherein each of them is responsible to bring the other along. This helps Z1P for countering the risk of customer falling into arrears. Z1P generates revenue in the form of interest, monthly fee, or establishment fee though customers and merchant service fee through retailers.

The following table represents continued rapid growth delivered in their underlying operations in key operating metrics, which now incorporates operations in New Zealand and the UK, following the recent PartPay transaction (to acquire PartPay, now Zip NZ), which was approved on 30 October 2019.

Post-acquisition, rebranding to Zip and successfully integrated into the core business, Zip NZ:

Zip’s merchant base continual expansion to include 20,875 partners who are now accepting Zip across 51,000 points of presence both online and in-store across Australia and New Zealand. The new partners that went live on the platform in the quarter or are currently in integration include Amazon, Optus, Ola, Seafolly, City Chic, Nutrimetics, My House, Sigma, Freddy’s, Jax Tyres, Beginning Boutique, Betta Home Living, Budget Pet Products, mycar (Kmart Tyre & Auto), and Bridgeclimb Sydney.

Zip believes that the company is on track to achieve its financial targets set for FY20 and is: