The Australian dollar fell to its lowest level in almost a decade and the 10-year government bond yield slipped to a record low on 18 June 2019, after the Reserve Bank of Australia (RBA) released the minutes of its policy meeting held on June 4. The local currency reacted to comments from the central bank in its recent policy meeting minutes that it might further cut interest rates in the next few months, in order to support the economy. The Australian dollar fell to USD68.37 cents on Tuesday, 18 June 2019, which is the lowest level since January 2016. The local currency had hit USD67.89 cents in March 2009. Expectations of further easing in rate cuts led the 10-year government bond yield to hit 1.365%.

According to the bank, further interest rate cuts would be aimed at assisting in lowering the jobless rate and boosting household expectations towards recovery in inflation, which remained below 2-3% target range for three years for the country. Inflation deteriorated to 1.5% in the first quarter of 2019. Developments in the labour market specifically would play a major role in assessing whether further cuts in official rate is required. Meanwhile, the policy makers also mentioned that the rate cut is not the only policy option that is to be considered to support the labour market and reduce the unemployment rate in Australia.

Meanwhile, the policy makers at the bank noted that the trade dispute between China and the United States would continue impacting the global economic outlook. The trade war between the two economies is a problem for Australia as well. Australia is a major exporter of milk, meat, coal, natural gas and many more to China, which accounts for a major portion of imports to the United States. In 2017, China was the largest two-way trading partner, export market and import source for Australia. Trade with China accounted for 24% of the total trade and stood at $183 billion in 2017, which was up 16% from 2016. For FY18, total trade between the two countries stood at A$194,620 million.

A weaker currency is good for economic growth for an export focused economy. Falling Australian dollar is good news for Australian exporters, as it makes them competitive in the global market. Australia has a huge number of companies dealing in exporting activities in sectors such as agriculture, tourism, mining and education. However, currency depreciation isn’t good for importing companies, as it would adversely impact their operating metrics.

Moreover, it would encourage the tourism sector and more and more tourists will visit the country, which in turn would boost the economy. Another favourable aspect of a weaker currency is that Australian companies would become more attractive for international companies trying to acquire the Australian businesses.

The Reserve Bank of Australia (RBA), in favour of further rate cuts, stated that lower official rates can support the economy. Lower borrowing rates for businesses, lower value of the exchange rate and lower interest payments on loans by households as a result of lower interest rates are likely to positively impact the Australian economy.

On 4 June 2019, the Reserve Bank of Australia (RBA) announced an interest rate cut by 25 basis points to 1.25%, aiming at boosting confidence that inflation will come back to its target and supporting employment growth. This was the first time in over three years that the central bank reduced the interest rate. In Australia, long-term bond yields, bank funding costs and Australian dollar have slipped in recent times. However, the Australian economy is expected to grow by around 2¾ per cent in 2019 and 2020, backed by increasing investments in infrastructure and growing activities in the resources sector. RBA Governor Philip Lowe, who revealed the monetary policy decision, stated that the bank will keep a close look at the labour market and make the required changes in its monetary policy in order to ensure economic growth and achieve its inflation target. 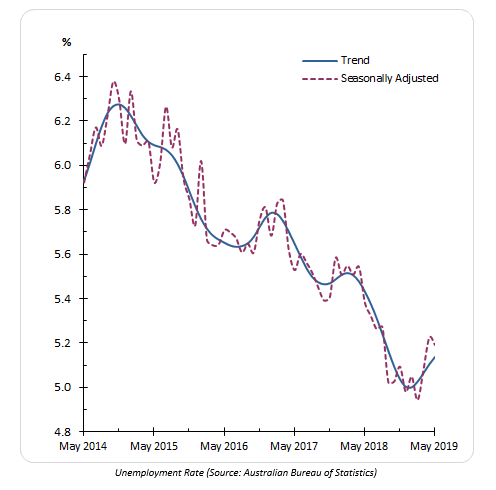 In the quarter ended March 2019, the price index for residential properties for the weighted average of the 8 capital cities in Australia dropped 3.0%, as per data from the Australian Bureau of Statistics (ABS). While index for the financial year to the march quarter recorded a drop of 7.4%, the data suggested. Decline in housing prices was reported in all capital cities during the period. In the reported quarter, for Sydney, Melbourne, Brisbane, Perth, Canberra, Darwin and Adelaide and Hobart, capital city residential property price indexes dropped 3.9%, 3.8%, 1.5%, 1.1%, 0.9%, 1.8%, 0.2% and 0.4%, respectively. The total value of residential dwellings in Australia stood at $6.56 trillion at the end of the first quarter of 2019, falling $172,749.1 million over the quarter. This decline could be attributed to reduced demand from investors and tight credit supply. The data highlights worse house prices in the country and results in a selling pressure. 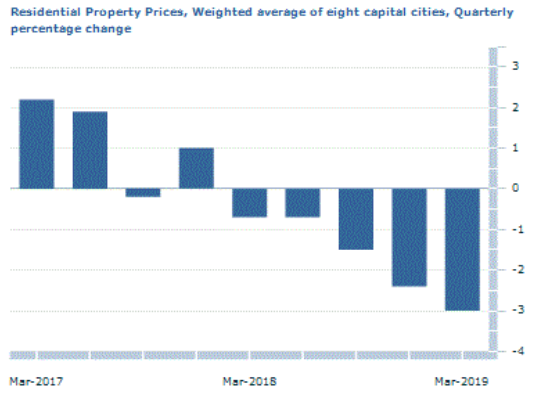 Several economists are expecting two or more interest rate cuts in the coming months before the end of the year, as part of the central bank’s move to help stimulate the economy by lowering unemployment and helping inflation rise to a level that is in line with the target. This will prepare the Australian economy for any shocks in the future.