Australian Agriculture Sector Likely To Get Impacted From The U.S-China Trade Truce

The Australian commodities such as iron ore & coking coal have seen a rapid surge in price, which, in turn, is supporting the export industry of Australia. The Australian Department of Industry, Innovation and Science (DIIS) estimates the total export to reach the level of $285 billion in 2019-20. The DIIS also estimates that Australia exported $275 billion of mining and energy products till mid-2019.

The high commodity prices and weaker domestic currency boosted the export earnings. The Australian agri-industry forms an important part of the overall export market, with over 15% contributions to the Australian exports. 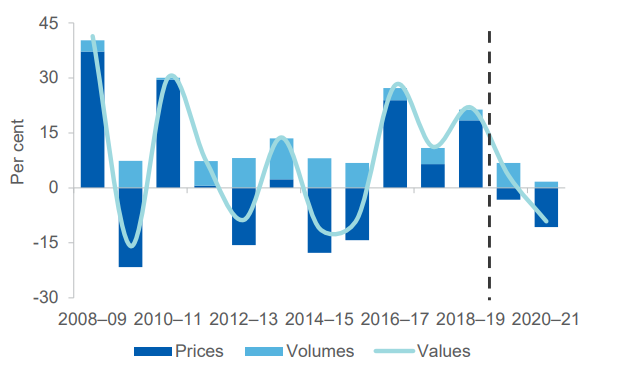 The recent escalation in the U.S-China trade war is hampering the global economic conditions, which could be seen as a potential risk to the current commodity export regime in Australia. However, the positive gesture between the United States and China at the side-lines of the G-20 summit over the weekend suggests that the trade war could further enter a trade truce.

If a trade truce emerges between the two significant global economies, i.e. the United States and China, it could further support the hard commodity prices; however, the recent indication by China to import more from the United States farmers could jolt the Australian farmers.

If China purchases more farm products from the United States, it could be at the expense of the Australian industry.

As per the Australian Bureau of Agricultural and Resource Economics (ABARES), the value of production for the period of 2019-20 is estimated to stand at $59 billion amid lower forecasted price of significant cereal crops, with production expected to be 10 per cent below the last 10-year average.

The Australian Department of Agriculture also estimated the export for the period 2019-20 to stand at just $45 billion amid a decline in international prices, which remains unchanged as compared to the previous corresponding period.

The value of crop production is expected to remain $30 billion in the period from 2019-20, unchanged as compared to the previous year.

Australia witnessed an above average rainfall in major growing regions such as South Australia, Victoria and southern New South Wales in May 2019, which in turn, reloaded soil moisture levels led to a conducive growing environment. 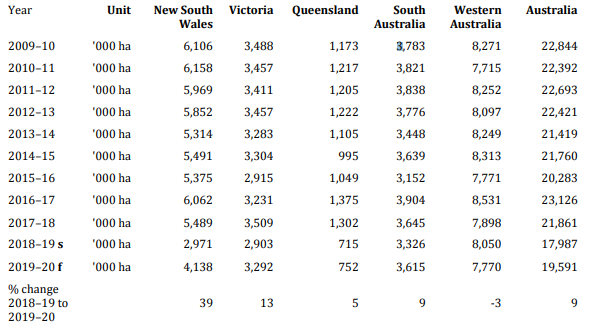 The Australian Department of Agriculture forecasts the winter crop production area to inch up, which in turn, is forecasted to mark an increase of 20 per cent in winter crop such as wheat and barley production. 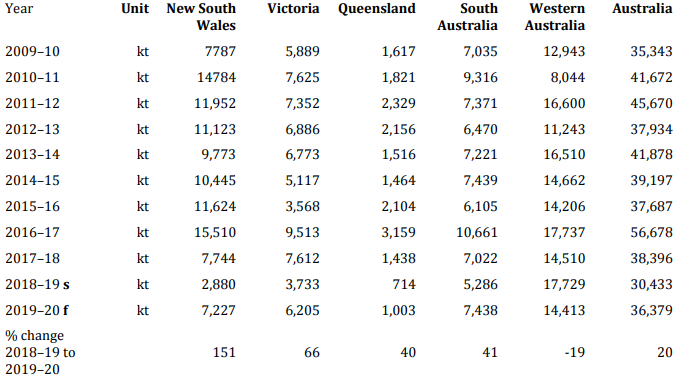 The prices of agricultural products in the international market is already weak amid abundance in the supply chain, and if China decides to replace the Australian export, it could further exert pressure on the Australian agriculture sector.

The wheat prices have taken a jab amid the oversupplied market. The higher wheat production across China, India, Russia, etc., have filled the market, which in turn, exerted pressure on wheat prices in the international market.

On a monthly chart, we can observe that the United States Wheat future continuation chart is moving in a continuous downtrend since late 2017. Amid the recent events, the wheat prices pulled a breakout on the monthly chart; however, the prices went back o retest the extended downward sloping trendline, the prices usually retest the breakout level.

For now, the wheat prices are taking the support of the extended downward sloping trend line. The short-term exponential moving averages of 7 and 20 days just crossed each other forming a bullish pattern and volumes are showing a rising trend. The prices could face a hurdle around US$590-595, and investors should keep a close eye around the level; while the primary support is at US$400—US$390 on the monthly chart.

Apart from the winter crop weak prices, the prices of dairy products in the international market is also low. Further, the Australian agriculture department forecasted the dairy price to be lower in 2019.

As per the ABARES, the agriculture export earnings are forecasted to decline by 5 per cent in the period of 2019-20 amid forecasted export fall in livestock and livestock products. Despite weaker winter crop prices in the international market, the Australian agricultural departments forecast that the average agriculture export price would remain unchanged in 2019-20; however, if China favours the United States Agri import, it could hamper the earnings.

The earnings from livestock and livestock product export are forecasted to decline by 11 per cent. 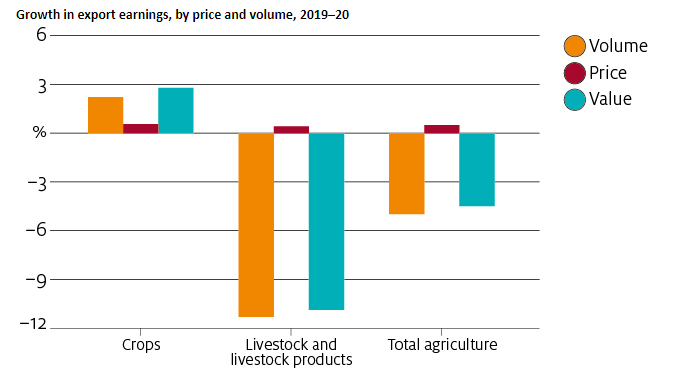 The Risk to the Forecast:

The Australia agriculture department assessed that various factors, such as global economic growth could affect the overall export outlook.

In a nutshell, the international crop prices are expected to decline; however, the weakness in the domestic currency along with higher production could offset that, and ABARES expects the average agriculture export earnings to remain unchanged in the period of 2019-20.

However, as stated above, the agri-market participant should keep a close eye over the import policy of China. If China favours the import from the United States for the agriculture products in order to resolve the U.S-China trade issue, it could hurt the sentiments of the Australian agriculture industry, as China is among the top importers from Australia.