As per the industry analysis, more than 80% of the total electricity usage in Australia came from non-renewable sources, o f which nearly 60% came from coal alone.

That means, the renewable energy sources accounted for roughly 17 percent, more than double of what it was a decade ago, with the most trending and sensational being the solar photovoltaics which seems to have finally been successfully used in applications from domestic to industrial all through.

As per the federal policy, popularly known as âRenewal energy Targetâ, the country should generate at least 33,000 GWh from renewable sources by 2020 through large- and small-scale schemes. The LRET (Large Renewal energy Target) was attained ahead of schedule in September 2019 with the 16,500 GWh addition since 2017. This remarkable feat was achieved due to the continuous flow of investments, almost doubling to $20 billion in comparison to the previous year.

The economy continued its growth path to $1.8 trillion and so did the energy appetite which grew to 6,172 PJ. The biggest-energy consuming sector being the transport sector with an aggregate of 28.1% of the total energy mostly coming from the fossil fuels, followed by electricity generation of which 60.39% was roughly generated using coal.

As per the Bloomberg new energy financeâs analysis, 82% of electricity generation in Australia would be sourced from renewable sources by 2050. The analysis justifies the closure of thermal based power plant such as the Hazelwood brown coal fired power plant in Victoria, shut in 2017 and the emergence of renewable power projects.

The Chinese have also started restricting the coal imports due to the strict environmental regulations leading to long term reduction of the exports of coal, which was booming until now. The government has also undertaken various initiatives to bring down the dependency on non-renewable energy sources.

The government had announced in August 2018 to implement a Default Market Offer (DMO) for retail customers as suggested by Australian Competition and Consumer Commission to set a price cap in the regions which were not subjected to any pricing regulation until now. This ultimately leads the customers to get power at reasonable prices and an opportunity for energy providers to build up long term loyalty among its customers and switch to lower cost and cleaner renewable power sources. 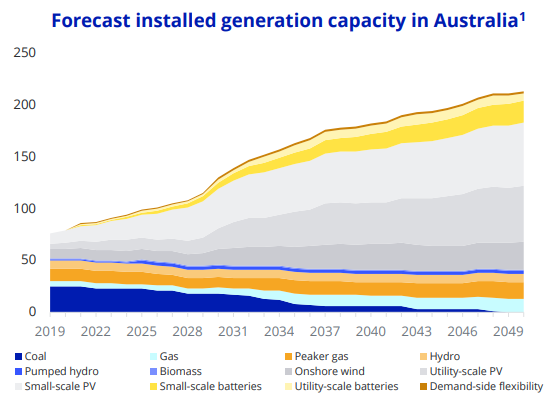 The trending renewable sector is not only invested by large cap companies such as AGL Energy and Origin energy but also by mid cap and small firms such as New Energy Solar and Tilt Renewables. The following discussion is to provide an overview of the companies of different sizes and their current and future.

Origin Energy (ASX:ORG) operates the mammoth, 2880 MW Earing coal-based power plant which is the largest in the nation. The company is not restricted to conventional sources of energy but also added almost 500 MW of contracted renewables to its portfolio in FY2019.

The company follows a stepwise approach to achieve their following targets-

The power from Beryl is being used by the Sydney metro system under the 15-year purchase power agreement. The stock closed at $ 1.3 on ASX, on 6 December 2019.

TILT Renewables Limited (ASX: TLT) aims to manage energy generation assets in Australia and New Zealand. It includes over 20 wind and solar power plants with 8 operational assets. The company acquired Liverpool Range wind farm project, second largest active project in Australia with a capacity of 1000 MW. The project is under development and is scheduled to undergo construction in future.

The current operational capacity stands at 636 MW with 322 turbines operational and 469 MW under construction with 111 turbines. The H1 FY 2020 production stood at 1062 GWh.

The company is constructing new projects to achieve the following targets-

Renewable accounts to roughly 19.6% of the companyâs total capacity supplying over 13,573 GWh electricity to direct customers and 9,773 to large business customers. The company has been investing heavily into the solar, wind and solar batteries, trying to cut the cost to make it accessible for the general public.

The company is constructing new projects to achieve the following targets-