Australia to tap the global opportunity for Hydrogen, the fuel of the future

Hydrogen, the lightest and most abundant element is considered as the fuel of the future. With renewable energy now being perceived as a practical power source, the next in line to explode out is the Hydrogen as a fuel.

Did you know: It is ironical that, something as disastrous as the Hydrogen bomb played a part in Hydrogen’s industrial application for energy and power generation usage today. The Hydrogen cryogenics technology was efficiently developed during the Hydrogen bomb development program at Los Alamos in the 1950s. Hydrogen has also been used as a Rocket propellant by Nasa, European Space Agency EADS and Russian as early as the 1960s.

The new advances happened when global economic leaders came together, and the G20 nations approached together at the International Energy Agency (IEA) meet in Karuizawa, Japan to set the path for Hydrogen development globally and to provide an unprecedented solid momentum to the sector to recognise the neglected clean energy sector as the fuel for the mobility and industrial boost for the future.

As per the IEA, Hydrogen industrial demand has been growing in the past decades, with almost 6% of the global natural gas, and 2% of global coal now being used for Hydrogen production. The electric vehicles have been debated and maligned by many for not being a green mobility solution but are only transferring its share of emissions to the power generation sectors, which majorly depends on fossil fuels.

Hydrogen is often projected as the mascot of clean fuel, but in actual is produced using polluting fossil fuels such as Natural Gas and coal. The clean nature of the Hydrogen depends on the source and the manufacturing technology. A quick shift to the non-polluting manufacturing process is the need of the time for Hydrogen to be considered as a fuel of the future. 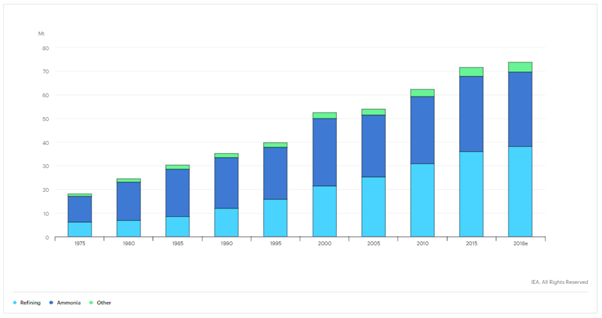 Demand for Hydrogen Source: IEA, The Future of Hydrogen June 2019

As per the IEA, global hydrogen production stands around 70 million tonnes a year. Presently, almost 55% of the worldwide hydrogen production is used for the Ammonia production, and remaining is used mostly in the petrochemical plants and oil refineries for isomerisation and Hydrodesulfurisation (HDS) processes and Rocket fuels. Only 1-2% of the total Hydrogen is presently used for energy usage, which is anticipated to grow substantially with the global shift towards green energy sources

Majority of the Hydrogen produced today either comes from the Oil refineries which produces Hydrogen during Steam reforming which is not an ideal source due to the high emissions from the manufacturing process attached to it.

What to expect from the future?

In future, an increased proportion of Hydrogen is anticipated to be utilised for electricity generation and transportation sector. Hydrogen-powered cars from Honda and Toyota, to Heavy Trucks by Nikola Corporation (NASDAQ:NKLA), to the increased space interest and the competition to Mars by national space agencies and private players such as Elon Musk’s SpaceX now gives a preview of the future.

Nikola Corp, the New Kid in the Block with Zero Revenue Valued at US$22.71 Billion: Must Read 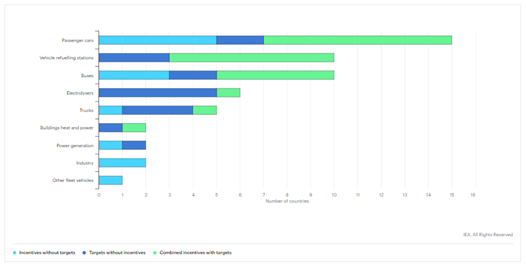 With the climate change phenomenon being evident in almost all corners of the world, every year a couple of countries are providing subsidies and incentives with aggressive targets for hydrogen deployment in transportation and mobility, Electrolysers, HVAC, Power generation and industrial sectors.

Such targets and incentives would facilitate the shift towards a Hydrogen-powered future. Still equally, an important focus is required on clean and low emission production of Hydrogens such as electrolysers and CCUs.

Australia holds vast opportunities for Hydrogen production through sustainable and cost-effective Carbon Capture Utilisation and Storage Units (CCUs) and vast electrolysers. A mega CCUs plant is anticipated to be operational in 2025 in South Western Australia with a portion of the 2.5 tonnes Carbon dioxide captured from the Hydrogen production units.

As per the IEA’s report from 2019, the Australian Hydrogen exports to Japan would equal to almost US$5.5 per Kilogram of Hydrogen against Japan’s domestic production costing US$6.5 per Kilograms using electrolysers in the year 2030 establishing the Australia strong economics to ramp up Hydrogen production.

In fact, as per the Australian Renewable Energy Agency, the Hydrogen opportunity for Australia in 2040 is valued at 3 million tonnes of Hydrogen annually carrying value of $10 billion to the country’s chest.

Australia holds high-quality renewable energy resources, fossil fuels including natural gas and coal and land for nearby carbon sequestration to the Hydrogen production facilities. Australia plans to co-operate with global energy mongers to form long term partnerships for exporting Hydrogen, the fuel of the future.

All financial information pertains to Australian Dollars Unless stated otherwise.