Chinaâs stance to cut the deepening roots of the Australian coal had already caught the ASX coal stocks off guard. The recent anticipation from the industry experts of an extension in the coal import restrictions in China for another year could reveal more headwinds for the beleaguered Australian coal industry.

Australia is the worldâs largest exporter of metallurgical coal and is the second-largest exporter of the thermal coal with China being the primary market of the global coal exporters. Australia exported 183 million tonnes of metallurgical coal, which accounted for an export earnings of $44 billion in 2018. Also, Australia exported 210 million tonnes of thermal coal, which accounted for $26 billion export earnings in 2018.

The prices of premium Australian HCC (or hard coaking coal) is anticipated by the Australian Department of Industry, Innovation and Science (or DIIS) to be subdued amid ample supply and weaker demand. The DIIS estimates the HCC spot price to average USD 158 a tonne in 2021 against the anticipated average price of USD 186 a tonne in 2019.

The Australian premium HCC spot prices have witnessed a sharp decline in the past few months over muted demand amid multiple factors. The demand for the premium hard coking coal remained low over the deteriorating global economic conditions, weak global steel production outside China, and soft demand from the Chinese steel mills.

While Chinaâs import for metallurgical coal remained strong in the recent quarter, largely from Russia and Mongolia, the Chinese mills remained somewhat reluctant to buy the Australian coal amid declining margins and tightening coal imports restriction.

DIIS Forecast On the Metallurgical Coal

The DIIS anticipates the total coal imports in China to remain around 280 million tonnes in 2019 and expects the Chinese government to continue implementation of current import policies ahead, which in turn, could mark a sharp decline in coal imports at the end of the year.

The other growing Asian market such as India is anticipated by the DIIS to offset the gradual easing in demand from China. The metallurgical export earnings, which underpinned the growth of 15 per cent to stand at $44 billion in 2018-19 are anticipated to witness a fall to $37 billion in 2019-20 and to $35 billion in 2020-21 amid weaker prices.

However, the volume of the Australian metallurgical coal is anticipated to remain steady, with miners targeting emerging Asian market such as India. The ASX coal miners are already diverting the current coal supply to Asia over the import restrictions in China.

The prices of thermal coal benchmark-Newcastle 6,000kcal/kg NAR touched a 39 month low of USD 61 a tonne in late August and averaged around USD 67 a tonne in September 2019 quarter, which marked a downfall of 13 per cent from the previous quarter and 40 per cent on a Y-o-Y basis. 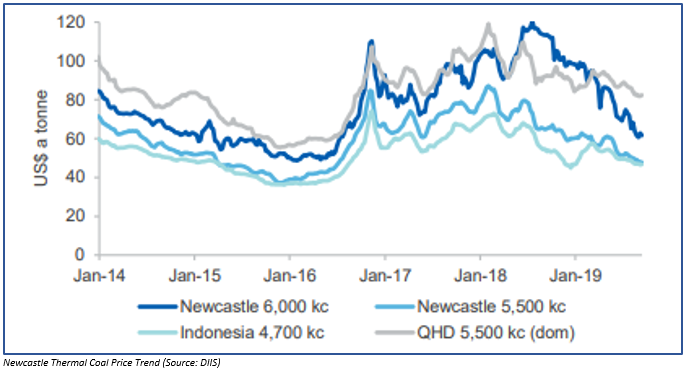 The decline in the benchmark Newcastle thermal coal spot is largely due to the oversupplied market created by the entry of a large volume of thermal coal in the seaborne market since 2018 amid troubled demand amid multiple factors.

The demand for thermal coal has been disrupted by the lower imports from Japan, South Korea and the European Union amid switching by these countries to alternative energy sources. Apart from that, the soft LNG prices in the global market coupled with environmental concerns had prompted many countries to look forward towards switching coal-to-gas, including Australia itself.

The higher import restrictions in China also played a significant role in the sluggishness of thermal coal prices.

DIIS Forecast On the Thermal Coal

The DIIS anticipates the Newcastle benchmark thermal coal spot price to average USD 72 a tonne in 2021 from the estimated average price of USD 105 a tonne in 2018 as a number of Chinese ports reach their assigned annual quotas for coal imports in 2019 along with higher restriction.

However, the short-term demand from Japan is anticipated to provide some relief but would contribute towards volatility in the thermal coal market.

To Know More About Thermal Coal Demand Scenario in Japan, Do Read: How Would the Coal Demand Dilemma Shape the Australian Coal Industry Ahead?

In the wake of higher import restriction on the Australian coal in China, the ASX coal miners are diverting the coal supply towards the other emerging Asian economies as the emerging economies such as India lacks the technology to cut down on the coal dependency for energy generation quickly.

The DIIS further anticipates the thermal coal earnings to decline amid weaker prices in the market- to $81 billion in 2020-21; however, the impact of the lower prices is expected to be offset over the higher volume supply from the Australian thermal coal sector.

China imposed a higher restriction on the coal imports earlier this year to support the domestic supply of the commodity, which is usually narrowed over the price advantage which the foreign coal holds in China.

China is the worldâs largest steel making country, which in turn, keeps the demand for metallurgical coal ignited in China; however, the geophysical barrier related to the production and transportation of coal in China keeps the prices of the domestic coal off the roof.

To conclude, the higher import restriction imposed by China on the Australian coal is giving some tough time to the ASX coal miners and their stocks prices on the exchange; however, the ASX coal miners are diverting their coal supply towards the emerging Asian economies such as India.

The demand for thermal coal could remain high in counties like India as the increase in population coupled with strong industrial and infrastructure growth would require high energy consumption, and developing economies could not easily shift towards alternative energy resources (excluding rapid technology development) such as natural gas for energy generation, which keeps the demand for conventional energy source such as coal and oil afloat.

However, the extent of usage of different energy resources would always vary as per the energy policies of a country.