The battery boom has instigated many miners to jump in the segment and take advantage of high pricing; however, the slower growth in the lithium components market against the expectation of producers has significantly contributed towards the fall in the value of shares of those miners.

The roots of battery boom lie in the fact that the global economies have been trying to curb down the pollution level, which in turn is boosting the electric vehicle segment, free of harmful carbon emissions with increasing reliance on batteries.

The dependency of the segment on batteries created a battery boom in the market, and various producers engaged in the development of battery chemistry that could be highly efficient and productive.

One such battery chemistry of lithium hydroxide has emerged apart from the conventional titanium battery, which in turn, engaged various lithium producers to either jump in the processing of the battery chemical or increase production of primary lithium to take advantage of high lithium prices in the market.

However, over time, the boom started to become a bubble; the pricing of lithium hydroxide chemistry dropped over time, which got reflected in the share prices of the companies with lithium exposure.

One such lithium hydroxide developer and spodumene extractor, Pilbara Minerals Limited (ASX: PLS), the operator of high-grade lithium and Tantalum Pilgangoora Project, felt the bubble burst and the share prices of the company took a jab over the fall in lithium chemical pricing.

PLS announced its Pilgangoora Production and Sales Update on 17th June 2019, as per which, the production of spodumene concentrate stood at 22,375 dry metric tonnes during May at Pilgangoora Lithium-Tantalum Project.

As per the company, the production in June would be subjective to a normal 6-day planned shut-down of the concentrator and production; however, the spodumene concentrate production is expected by PLS to the in the range of 20 to 24-kilotonnes on a dry metric tonnes basis in June 2019.

As we can see from the histogram graph above, the production level is expected to reach the December 2018 high and as per the company, the underlying demand for battery-ready lithium chemicals is strong.

However, PLS sales for June quarter is constrained over the delays in the construction, commissioning and build-out of the companyâs offtake customers in China such as General Lithium and Ganfeng Lithium, which takes spodumene as a feedstock for battery ready chemical production.

To overcome the sales deficit , Pilbara Minerals is working with its offtake customers to accommodate their revised ramp-up timelines, and along with that, the company is also arranging sales to other strategic customers.

Pilbara further plans to moderate the production during June and July to overcome the current problems faced by the spodumene industry, which has soften the prices in the market, and mentioned that it would utilise the time to rectify the RCR defects along with the completion of the plant improvement work. The improvement work would specifically focus on achieving design recovery by the end of the year 2019.

The share price of the company plunged today on ASX by 9.93 per cent as compared to its previous close to trade at A$0.635 (as on 17th June).

As per recently released annual results, Galaxy sold 159.3k dry metric tonnes of spodumene in FY2018 from Mt Cattlin, up by 4 per cent as compared to the previous corresponding year. The average grade stood at 5.76 per cent of lithium oxide for FY18 as compared to 5.69 per cent in FY17.

The mineral resources and ore reserves of the Mt Cattlin prospect are also improving since FY2015 with noticeable increase in grade quality as well. 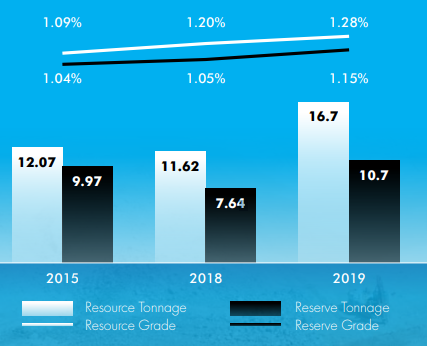 Apart from production and optimization of Mt Cattlin, Galaxy is also focused on its development projects, which include, Sal de Vida and James Bay

On the macro perspective, Galaxy sees a robust demand of lithium ahead. As per the company, China is aiming for 1.7-1.8 million NEVs in 2019 and the global market would begin to see the launch of mainstream EV models from global original equipment manufacturers.

Despite such high production guidance and a rosy macro outlook, the share price of the company is losing value over weakening lithium chemical pricing in the global market. The shares of the company dropped from its 2019 high of A$2.415 to the present low of A$1.385 (as on 17th June), a decline of more than 42 per cent in less than six months. GXY is currently trading at A$1.410, down 3.43% (as on 17th June 2019).

AJM recently presented its operation update for May 2019, in which, the company mentioned that it delivered a record monthly production of 15,737 wet metric tonnes of lithium concentrate in May 2019 from its Stage 1 operations in Altura Lithium Project.

The production number for May 2019 demonstrates a significant improvement in the performance of the processing plant. The improved performance marked the project achievement with the production of 6 per cent graded lithium oxide, at or above the nameplate capacity of 220,000 tonnes per annum.

AJM reached a production level of around 742 tonnes of spodumene concentrate per day (24 hour), approx. 16 per cent up from its targeted level of 640 tonnes a day. AJM reached record production in the previous quarter.

The monthly production of the company increased since September 2018 and reached a top value of approx. 16k wet metric tonnes in May 2019. 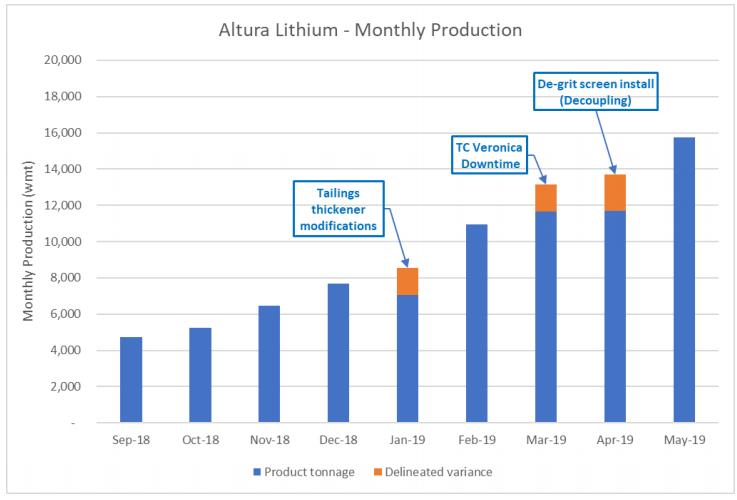 AJMâs lithium operations sales figures are comparatively less than the guidance range, which in turn, denotes a week demand in the global market.

While the lithium players are noticing the pressure of falling lithium chemical price and weak demand of the spodumene concentrate in the global market, the innovation of few lithium chemical players is comparatively enjoying the market privilege.

LPD is focused on exploration, development and production of lithium chemicals with a technology that produces lithium carbonate through non-conventional sources, such as, lepidolite and zinnwaldite (lithium rich mica). The L-MaxÂ® Process of the company provides the lithium market with low-cost lithium carbonate supply from alternative sources, and the LOH-MaxTM provides lithium hydroxide from lithium sulphate with no sodium sulphate as a by-product.

In an announcement made public by the company on 17th June 2019, LPD mentioned that the 15 tonnes of lepidolite sample, which the company sourced from its Alvarroes Lepidolite Mine in Portugal, has been processed to produce 5.5 tonnes of concentrate.

The production of the concentrate denotes a milestone for the Pilot Plant Project of the company, which is targeting commercial production for the year 2021.

The production-grade of the 5.5 tonnes of concentrate stood at 4 per cent of lithium oxide, and LPD classified one tonne to be ready for the leach feed. The commencement of the first Pilot Plant campaign is scheduled for 24th June, which is expected by the company to run for approx. four weeks.

LPD shares increased in value from its 2019 low of A$0.015 to the level of A$0.043 (high in April 2019) over the innovative low-cost production, which could allow the company to supply the lithium chemical market at a cheaper rate. However, the grade of production is low as compared to the standard grade, and the investors should keep a close eye over the progress of leach pilot plant of the company.