In Australia, there are plenty of high-quality health care companies, most of which have delivered excellent returns. Investment in health care stocks is high yielding; however, it does include risks. If undergoing clinical studies fail to deliver the desired results or if there are obstacles to securing regulatory approvals, the share price might report a drop. Stocks in the health care sector that are approaching towards the completion of their research & development stage or awaiting regulatory approval are also expected to deliver better returns to the investors.

Health care sector player based in Sydney, Australia, Biotron Limited (ASX: BIT) is a developer of drugs, designed to treat viral diseases with an unmet medical need. The company is also into commercialisation activities.

The company is focused on novel small molecule approach targeting viroporin proteins, which are important to facilitate the pathogenicity of hepatitis C, HIV-1, Dengue, Zika, Influenza and other viruses. Currently in the second phase development, BIT225 is the lead compound of the company, being developed to treat HIV-1 & hepatitis C. The viroporin approach has shown early in-vitro activity against Dengue, Zika and other viruses.

On 21 October 2019, the company released its quarterly report for the period ended 30 September 2019, unveiling net cash outflow towards operating activities of 881,000 and net cash inflow from financing activities of $5,000. Cash and cash equivalents at end of quarter stood at $4.87 million. For the next quarter, the company is expecting cash outflows of $1.84 million.

Treatment and control of hepatitis B virus has been a crucial focus of endeavour for antiviral drug development by health care industries. The number of people infected with HBV has grown to 2 billion, globally. According to WHO estimates, over 250 million people are chronically infected.

Biotron came up with an approach of novel small drug molecules which effectively treat HBV in cell cultures. The company is working with a US-based research organisation for characterising the anti-HBV activity of its compounds.

BIT225, the lead compound of Biotron, is in the mid-stage of its clinical development, targeted towards HIV-1 and Hepatitis C virus (HCV) infection. The company has completed seven clinical trials with the compound. A total of 55 healthy volunteers and 94 infected subjects either with HIV-1, HCV or co-infected with HIV-1/HCV, have received the BIT225 treatment.

ASX listed health care player, Micro-X (ASX: MX1) is engaged in the designing and manufacturing of products like mobile x-ray imaging systems for health care and security markets, which are based on the proprietary cold cathode, carbon nanotube emitter technology. The company is headquartered in South Australia and has its core R&D, engineering and production capability at its facility in Adelaide.

Carestream DRX Revolution Nano is the first product launched by Micro-X, which is an ultra-lightweight digital medical x-ray system for the rapidly expanding mobile x-ray market in hospitals and healthcare sector.

On 21 October 2019, the company announced that its patent application for ‘Large Scale Stable Field Emitter for High Current Applications’ was published under International Publication No. WO 2019/191801. This is a great achievement and key addition to the company’s intellectual property portfolio.

The patent mentions the main elements of the carbon nanotube emitters, which are a core component of the company’s next generation x-ray tube devices, the core technology behind all Micro-X products. This innovation is based on the essential concepts for nano-structure field emitters; hence, it provides Micro-X with a substantial barrier to competing field emitters being commercialised.

As per a company announcement dated 12 September 2019, The Premier of South Australia, The Hon Steven Marshall, MP was due to open a new extension to the manufacturing facility on 17 September 2019 and witness the first DRX Revolution Nano to be fitted with Micro-X’s new, in-house designed and manufactured CNT X-ray tube, come off the production line.

On 5 September 2019, Micro-X announced to have secured a follow-on contract by the United Kingdom Government’s Department for Transport under its Future Aviation Security Solutions (FASS) program. This program is funded by the UK government and will seek to extend the performance of Micro-X’s unique X-ray airport security imaging solution developed under an earlier contract.

Net loss for the Group and its subsidiaries for FY2019 after providing for income tax amounted to $9.834 million compared with a loss in the previous year of $16.595 million; comprised of-

There is a reduction in the loss for FY2019, and this loss was due to reductions in project development costs of $2.6 million.

Micro-X launched its Nano product in 2019 and has a planned roadmap for the next two years. 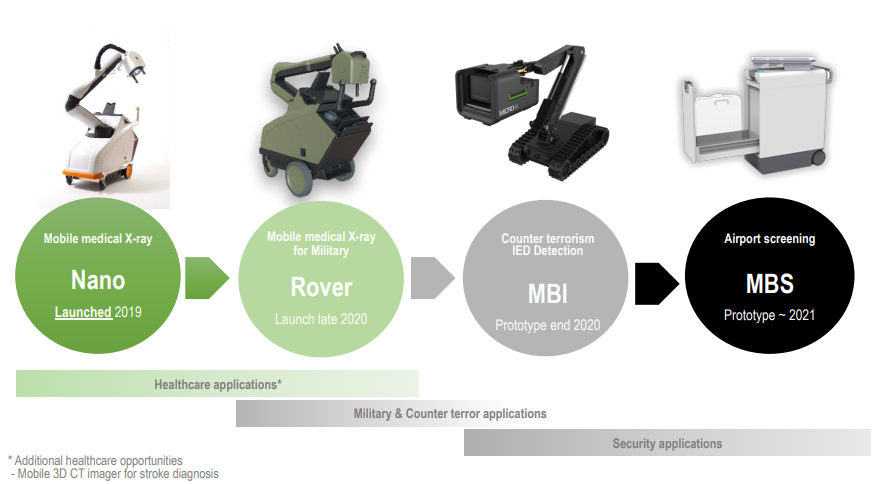