Interestingly, the most precious and sparkly gem, and best referred to as “girl’s best friend”, is nearly 100 per cent carbon. The only thing that can scratch a diamond is another diamond and scientists have discovered a planet in 2004, 55 Cancri e, which is believed to be composed of one-third pure diamond!

A solid form of carbon, a diamond cube has carbon atoms arranged in a crystal structure. When compared to other natural materials, diamond has the highest hardness and thermal conductivity. Natural diamonds age in the range of 1 billion and 3.4 billion years, justifying the proverb that “diamonds are forever”. Presently, Natural, synthetic and artificial diamonds are available, and are differentiated from each other through optical methods or thermal conductivity dimensions. Pure diamond transmits evident light and seems to be a clear crystal. The yellow and brown colour in diamonds are caused due to the most common impurity affecting it, nitrogen.

Diamonds are rare and are found with concentrations at most parts per billion in source rock. Approximately 35 countries of the world possess diamond. South Africa, Russia and Bostwana are the prime producers of the gem, with Australia leading the industrial diamond space. India, China, the US and Canada are amongst other regions that have the presence of diamond.

Diamond caters to both industry and jewellery purposes. The poor and small quality stones are used as an abrasive metal to cut wheels and drill bits, grind and polish powders, in machine bearings and to cut glass. The good quality diamonds are used to make jewellery.

Diamond in Australia: Australia has been producing diamonds since the 19th century, with the first record dating back to 1851. Its largest and healthiest economic diamond deposit is the Argyle Mine, located in Western Australia, which was the world’s largest diamond mine by volume for a while. The largest diamond found till date was in 2003, mined at the Merlin Mine, weighing ~104.72 carats. The Ellendale area of Western Australia is also a diamond hub in the country, which is deemed to be a leading source of rare fancy yellow diamonds, contributing to half of the world’s supply. 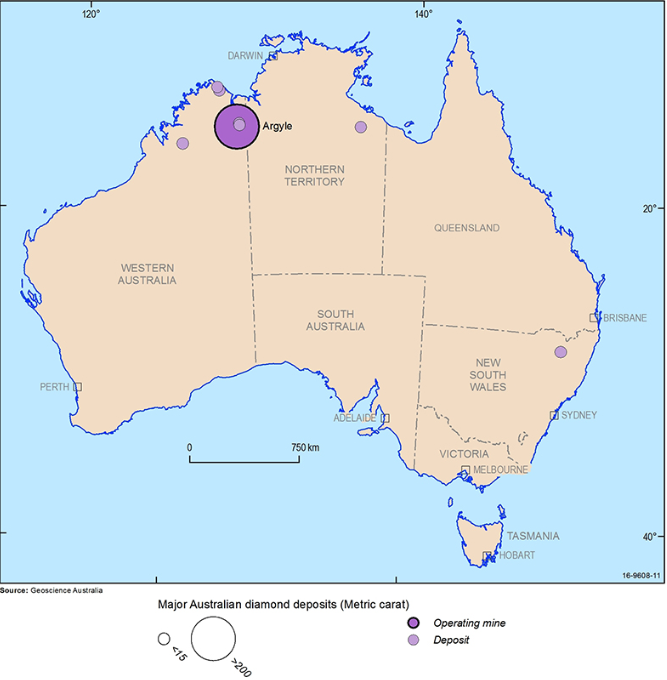 On a different but significant note, The Diamond Dealers Club of Australia believes that prior any diamond purchase, one should take into consideration the 4 “C”’s- Cut, Colour, Clarity and Carat.

Discussing the relatively recent times, market experts state that the industry revenue for diamonds is most likely to go down by ~9 per cent over the five years through till 2019 and be valued at ~$460 million. Continuing the slump tale was a market anticipation that pink diamonds, perhaps Australia’s most valuable luxury export, is in the red zone given the buzz about the closure of the Argyle mine in the Kimberley. What’s happens eventually in this regard would be an interesting turn in the Aussie diamond business.

In the light of this context, let us look at two stocks, which deal with diamonds, and trade on the Australian Securities Exchange:

Company Profile: Besides being a pioneer in iron as well as other metals and the mining business, RIO is a leading diamond producer and the largest producer of natural coloured diamonds of the world. The company operates two diamond mines: Argyle Diamonds in Australia, which has been operational since 1983 and has produced over 800 million carats of rough diamonds. It is the one of largest supplier of diamonds across the globe, and largest supplier of natural coloured diamonds as well. The other mine is the Diavik Diamond Mine in Canada.

Second Quarter Production Results: On 16 July 2019, RIO released its second quarter production results and stated that it underwent operational and weather issues at the iron ore operations but maintained strong pricing and market demand. The below table depicts the overall production statistics, (in million tonnes):

Diamond Production Update: Concentrating on the recent diamond production update, at its diamond magnate region of Argyle, the carat production in Q219 was 5 per cent lower than pcp, given the lower recovered grade, partially offset by stronger mining rates. At Diavik, carats shined better, and the production was up by 3 per cent than pcp, driven by the slightly higher grades and ore processing throughput. As guidance of 2019 for the precious gem, the company expects the production to be in a range of 15 and 17 million carats.

Company Profile: A growing producer of high-value diamonds from the Lulo (Angola) and Mothae (Lesotho) mines, LOM is a mining and exploration company with headquarters in Subiaco. The company was listed on the ASX in 2006 and in 2007, it commenced exploration at Brooking, with the goal to discover lamproite, which is a host rock for diamonds in the West Kimberley region, including at Ellendale (region that is a lead supplier of pink diamonds). Presently, LOM is focussed on scrutinising the scope and timing of future operations at Brooking and Orapa Area F. 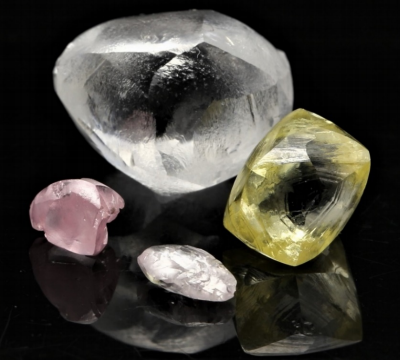 Quarterly Activities Report for June 2019 Quarter: On 15 July 2019, the company released its Quarterly activities report for the period ending 30 June 2019 and stated that it was on-track to report an operating profit in 2019.

Mothae kimberlite mine: At Mothae, the diamond carat production and grades are ~20 per cent ahead of plan. Post completion of the second diamond tender in Antwerp; the third tender is due for July 2019. Cash operating costs were 14 per cent better than expected, amounting to of $12.56/tonne. EBITDA was recorded as US$1.1 million for H1 2019. The Dewatering of southern pit would take place in Q319, driving access to higher-margin diamond zones.

Lulo alluvial mine and kimberlite project, Angola: The total sales of 1H19 amounts to $22.1 million, including the $10 million sales of the June quarter. Cash operating costs amount to $76/m3 and the EBITDA was $11.3 million for H1 2019.

Corporate Report: At the close of the quarter, LOM had a group cash balance of $5.2 million. The company had refinanced its Mothae project funding under agreements with New Azilian Pty Ltd and Equigold Pte Ltd, which are its biggest shareholders. On the existing Equigold debt facility end, the company paid three instalments of the Mothae acquisition and prepay two quarterly capital repayments of $1.9 million, through the New Azilian facility. Besides this, 3,425,000 unlisted $0.53 options expired without exercise.