Are Dark Clouds Hovering Over The Australian Dollar?

Major banks/firms have downgraded the Australian dollar (AUD) amid concerns over a slower global economy and current status quo in Australia. Banks like Commonwealth Bank and HSBC have downgraded the Australian dollar after Reserve Bank of Australia (RBA) revised down their growth and inflation forecasts. The RBA was anxious about a deaccelerating property market that could derail household spending and business investment. Australian dollar took a stall after RBA governor Philip Lowe retreated from his monetary policy guidance of moving up the interest rates and kept the rates unchanged to 1.50%, which has been at this level for over three years. RBA?s stance on balancing the chances of next interest rate hike or cut have been looked at by the market while RBA has adopted a policy of waiting and watching. The RBA governor is expecting an economic growth of 3% this year but also pointed towards the higher consumer spending amid falling property prices and risk from a global economic slowdown.

The scenario is now well captured by many economic reports. For example, the Westpac-Melbourne Institute consumer spending index rose from 99.6 to 103.8 (up 4.3%) in February and moved back above the 100-point mark that distinguishes between optimism from pessimism among consumers. Consumers? assessments of their finances improved as compared to last year and for the next 12 months. Additionally, the unemployment is tipped to fall below 5% and the number of consumers expecting the unemployment rate to fall has increased. 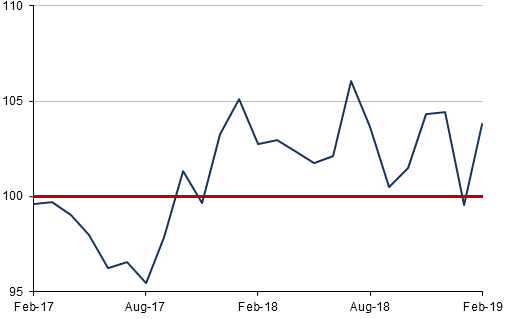 It has been stated that modest inflation and slowdown in economic activity and tighter credit condition underpinned the latest view on the dollar scenario.

Nominal retail sales in December squeezed 0.4% which was well below market expectations and marked a slowdown in consumer spending in other sectors apart from the housing sector. Shrinking sales in clothing, footwear, and household goods were somewhat offset by higher spending in food retailing, cafes and takeaway food services.

Given the above, HSBC is expecting the Australian dollar to fall to USD 0.66 by the end of 2019 amid weaker economic outlook. On the data front, the drastic fall in Home loans on a month-on-month basis marked a fall in economic growth and reflected higher bank funding costs, which in turn made it difficult for the Australian dollar to shine amid higher spending and falling property prices depreciated the currency. The credit cycle and economic cycle is showing a great sign of diversion which is exerting a pressure on the Australian dollar.

The RBA governor still hopes for a tightening labour market that will spur wage growth and the investors will be eyeing on the Wage price market Index for this quarter due to release on 22 February 2019, and any fall below previous levels will further exert a great amount of pressure on AUD.

On the counterpart, the U.S. economy was relatively doing good while the recent retail sales data casted some shadows on the health of the economy. The market has also been eyeing the extension of trade truce without an increase in tariffs that supported the U.S. dollar price, and seemed to have exerted additional pressure on the Australian dollar. A respite sign relating to the U.S.-China trade war and the meetings between the U.S. and Chinese delegation to work out on the trade war resolution to protect the U.S. intellectual property rights also are playing crucial roles.

Overall, AUD can be seen being pulled by different levers, and many economists believe to de-link credit cycles and economic cycles. It is thus prudent to watch out for any significant trends in the above direction.