The Saudi state-owned oil behemoth- Aramco, established by virtue of Royal Decree No. M/8 in November 1988G is going through the long-awaited Initial Public Offering; however, the energy enthusiasts are still not as excited as anticipated amid lower than forecasted oil prices in the global market.

The industry experts, oil traders, and many other anticipated the Brent crude oil prices to trade at USD 100 a barrel by the time Aramco lists the IPO on the exchange; however, the IPO came as a surprise to the energy community amidst the falling oil prices and building supply chains of the rival oil exporters such as the United States.

The Saudi oil major announced on 3 November 2019 of its intention to list the shares of the company at the Saudi Stock Exchange and published the red herring prospect on 9 November 2019 with an Offer Price range of SAR 30 to SAR 32.

Irrespective of the crude oil prices and the surmounting global supply chain of oil, the oil major value the company in the range of USD 1.6 trillion to USD 1.7 trillion. Aramco price range of SAR 30 to SAR 32 with the Offer Size of 1.5 per cent values the company to about USD 1.7 trillion, just below the USD 2 trillion desired value of the crown prince.

The 1.5 per cent stake or about 3 billion shares, value the IPO at USD 25.6 billion bigger than âAlibaba IPOâ, which raised USD 25 billion.

However, while only a limited tranche of global investors could participate in the IPO, it would be worth looking if the IPO goes oversubscribed or undersubscribed amidst the building supply chain in the second-largest oil exporter- the United States and falling crude oil prices.

The Brent crude oil futures (in continuation) have plunged over 28 per cent from its December 2018 top of USD 86.74 a barrel to the current market price of USD 63.62 a barrel (as on 22 November 2019 2:43 PM AEST) amid global cues and increased supply from the United States. 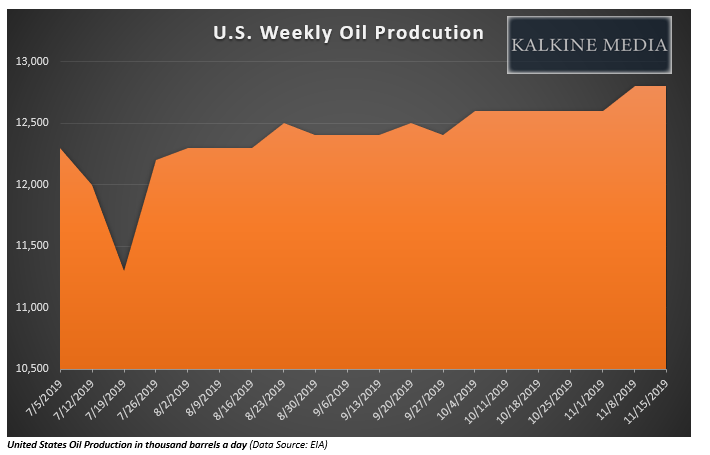 The oil production in the United States is increasing amid improved efficiency of the U.S-based oil producers, and higher shale production from various basins like Eagle Ford.

For the week ended 8 November 2019, the United States further increased its weekly oil production by 200 thousand barrels a day against the previous week, and the domestic production reached a new 2019 high of 12.8 million barrels a day.

While the higher domestic production in the United States is worrying the IPO enthusiast, the global cues should not be overlooked as apart from the increased global oil production capacity, the oblique demand amid the ongoing concern on the United States and China bilateral trade dispute is further adding to the woes.

In the recent events, the U.S. President Donald Trump again fuelled the fire with the talks of increasing the tariff further if the United States and China do not reach a bilateral agreement during the phase one of the trade negotiations.

How is the Market Reacting?

On comparing the implied volatility with the crude oil prices, we observe that, post the Aramco event, which led to the merger between the implied volatility and the prices (a case where market is worried about the supply), is again spreading and moving in the opposite direction, which further suggests that the market is no more worrying about the supply amid higher global oil production.

To Summarise, the crude oil prices are under pressure over the weak global demand and higher production, and the Saudi oil major is launching the IPO in the middle of the weak demand scenario, which makes it particularly interesting to watch if the Aramco IPO could beat the iconic IPO of the Chinese e-commerce giant- Alibaba, despite weak crude oil prices.

On the daily chart, we could observe post applying the Ichimoku cloud technique, that the crude oil prices are trading above Span A, which is at USD 61.47. The Span A, which represents the mean between the conversion line (navy blue) and the base line (light blue) is currently below Span B, which is at USD 64.05 and represents the mean value of 52-day highs and lows.

The presence of Span B above Span A, coupled with the increased distance (spread) from Span A, represents that the downtrend in the oil prices is still prominent.

The 14-day Relative Strength Index coupled with the rise in volume is suggesting that the prices might try again to test the hurdle of USD 64.05, and a break and sustain above USD 64.05 or failure to do so would decide further price action in the crude oil.