For the first time ever, Google's parent company, Alphabet Inc. has touched trillion-dollar market capitalisation, becoming the fourth American company to hit the milestone after Apple, Microsoft and Amazon. The NASDAQ-listed firm hit the number on Thursday, closing the trading session at USD 1,450.16, observing a rise of 0.76 per cent.

Below figure showcases the months in which the US companies hit trillion-dollar market cap:

Alphabet's record market valuation has been attained after a historical change in the Company’s leadership.

To recall, India-born Sundar Pichai took charge as the new CEO of Alphabet last year, replacing the co-founders Sergey Brin and Larry Page amidst an unmatched international demand for more regulatory scrutiny, safeguards and taxes. Mr Pichai, who has also been serving as the Google CEO since 2015, was appointed with a cash salary of USD 2 million per year.

It is worth noting that currently, Google is facing its most turbulent phase of its 21-year history, as it is dealing with antitrust investigations from the US federal and state officials and workforce protests amid sexual harassment allegations against senior executives. But it seems that these controversies have not affected the value of Alphabet's stock to a greater extent.

Market experts are of the opinion that investors are bullish on the Company’s new CEO, who has supported Google’s core businesses to generate substantial profits and revenue over the last few years. Moreover, the growing optimism over Google’s cloud business is keeping investors enthusiastic.

Alphabet announced its 3rd financial quarter results in October 2019 for the quarter ended 30th September 2019. The Company delivered a strong performance during the quarter, with revenues of USD 40.5 billion, marking a 22 per cent rise on a constant currency basis and a 20 per cent increase against the 3rd quarter of 2018.

The Company’s strong revenue growth was driven by mobile search, YouTube and Cloud services, backed by recent advancements in search and quantum. 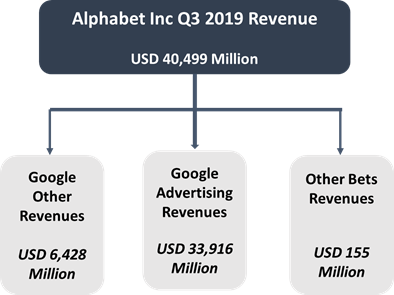 Though the other financial results were in line with the market expectations, the Company missed earnings expectations, achieving earnings per share of USD 10.12 against the anticipation of USD 12.42 per share.

As stated in the beginning, Alphabet is the fourth US company to touch USD 1 trillion mark after Apple, Amazon and Microsoft.

The iPhone maker Apple reached a market cap of USD 1 trillion in August 2018, driven by its strong fiscal third-quarter earnings report (June 2018 quarter). The Company reported solid financial results during the quarter, achieving revenue of USD 53.3 billion against expectations of USD 52.34 billion. Its Earnings per share also surpassed estimates, reaching at USD 2.34 against anticipations of USD 2.18.

Subsequent to Apple, Amazon touched USD 1 trillion market cap in September 2018, driven by its ever-diversifying portfolio. The achievement was backed by the launch of the grocery segment by Amazon, with its purchase of Whole Foods Markets. Moreover, the Company advanced its logistics and hardware segments with last-mile deliveries and continued development of its advertising division.

Microsoft hit the trillion-dollar market value amid its better-than-expected earnings report in April 2019. The Company reported robust fiscal third-quarter results (March quarter 2019), attaining revenue of USD 30.6 billion against USD 29.84 billion expected by market experts. Its operating income improved by 25 per cent during the quarter, reaching at USD 10.3 billion during the quarter.

Besides these US companies, the petroleum and natural gas company in Saudi Arabia, Saudi Aramco is sustaining its market value of over USD 1 trillion. The Saudi Arabian company launched its IPO in early December last year.

Alphabet, the newest member to join the elite club of USD 1 trillion market cap, has brighter prospects for 2020, particularly with regard to advertisement revenue. Investors are likely to keep a close watch on the Company’s approaching fourth-quarter results, expected on 3rd February 2020.