Every sphere of the business world agrees that regulations are an indispensable tool to ensure effective functioning of economies. Besides reinforcing markets, regulations protect the rights and safety of citizens while ensuring seamless delivery of public goods and services.

The World Economic Forum, a renowned NGO based in Switzerland believes that there are three vital channels through which regulation can benefit an economy:

Regulations in Australia are devised to certify adequate protection for the applicable parties, fair competition and maintain market integrity. Below mentioned are few regulatory authorities of Australia:

Adhering to keeping the regulation stance strong and vigilant in Australia, the competition watchdog, ACCC, has alleged Google LLC and Google Australia Pty Ltd (together, Google) recently. Let us find out why-

On 29 October 2019, ACCC notified that it has instituted proceedings against Google (Google LLC and Google Australia Pty Ltd) in the Federal Court on grounds that the company has misled conduct and made false/ misleading representations to users about the personal location data that the company Google collects, keeps and further uses.

According to the watchdog, since January 2017, Google has been breaching the Australian Consumer Law and misleading consumers regarding the location data Google stored/ used when specific Google Account settings were either disabled or enabled.

ACCC alleged Google for making on-screen depictions on Android tablets and mobile phones that consequently led to the misleading conduct. These depictions were made to users when they are setting up a Google Account on their respective Android tablets and mobile phones, and users who access their Google Account settings later through these gadgets.

Focus of The Allegation

According to the ACCC, Google was involved in misleading users about the attributes, nature and suitability for purpose of Google services, the Android operating system and Google Pixel mobile phones.

Before diving into the allegation, let us understand the structure of these settings:

The default setting for new Google Accounts is for âLocation Historyâ to be turned âoffâ (or âpausedâ) and the âWeb & App Activityâ setting to be turned âonâ. If the former is âonâ, Google frequently saves and maintains personal data concerning the userâs location.

However, if it is âoffâ, and the latter setting is âonâ, Google still gets and maintains personal data concerning the userâs actions on Google services and its Apps, involving the personal data related to the location.

The allegation states that Google did not inform consumers that both the settings in discussion had to be vigilantly turned off if they didnât intend for Google to gather, keep and make use of their location data. The ACCC believes that consumers would have realised that by turning off their Location History setting, the company would stop storing their location data. However, Google was hushed about the fact that the other setting (Web & App Activity) also had to be turned off.

In cases where the Web & App Activity was turned on, Google could still continue to gather location data. It should be noted that users make a deliberate decision to turn off settings to cease the collection of their location data, but Google might have let this option go in vain. 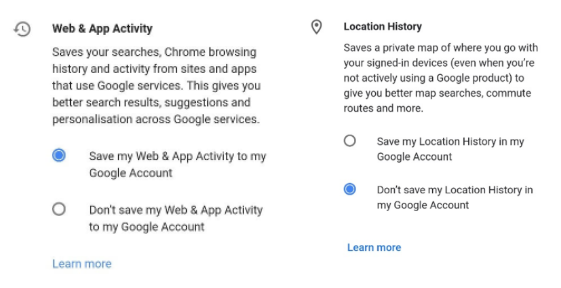 Moreover, ACCC alleges that from around mid-2018 until late 2018, Google had been intimating consumers that by not using certain Google services, including Google Search and Google Maps, they could prevent Google from collecting, keeping and using their location data. Even in this case, both the account settings in discussion needed to be switched off.

Adding on to the allegation of data representation, the regulator believes that Googleâs on-screen statements which broke down ways in which location data would be used when users accessed their âWeb & App Activityâ and âLocation Historyâ settings were deceptive.

Google ceased to reveal that the data could be used by Google for several other purposes which were irrelevant to the userâs utilisation of Googleâs services. This could be a probable reason for consumers to be deprived of the chance to make an informed choice and choose to share or not share their location data (personal) with Google.

Taking the allegation to the judicial level, the ACCC is pursuing penalties, orders and declarations that require the publication of remedial notices and the formation of a compliance program, pertaining to the issue.

The ACCCâs Digital Platforms Inquiry final report suggested that privacy legislation should be strengthened, by updating the definition of âpersonal informationâ in the Privacy Act and strengthening notification and consent requirements so that consumers are able to make informed decisions about the personal data they allow digital platforms to collect.