All That Investors Need To Know About RWC, EHL, COL and URW

Given the dynamic nature of business, companies undergo changes and variations in their performances across the year. A direct impact of this hovers over the company’s stock performances. In this article, let us look at the recent updates of the following businesses and understand their current stock positioning and performances:

Company Profile: Regarded as a global group of powerful brands, Reliance Worldwide Corporation Limited (ASX: RWC) is an industrial player, into the business of designing, manufacturing and supplying water control systems, along with solutions primarily for the plumbing and heating industry. Besides, the company also aims to boost the performance and efficiency of smart homes and specialist industries. Established in Brisbane in 1949, the company was listed on the Australian Securities Exchange in 2016 and has its global headquarters in Atlanta. Across the globe, the company’s business spans in 44 locations with 24 distribution hubs, 15 manufacturing plants and 5 Research and Development centres. 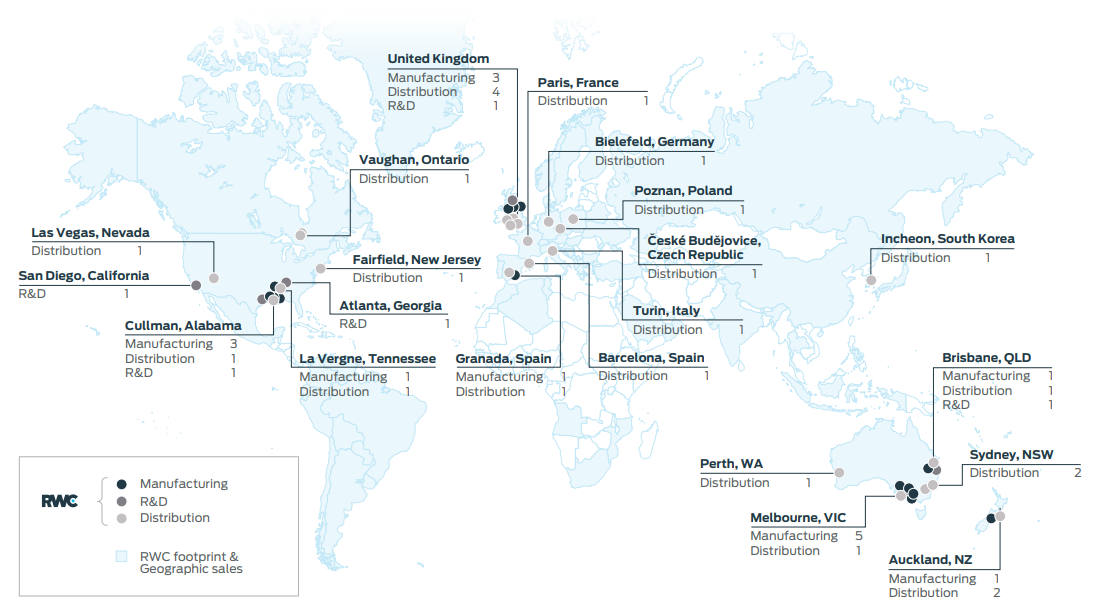 Previously, on 13 May 2019, the company provided a trading update and notified about the revision of its FY2019 EBITDA guidance. It mentioned that across the globe, there were adverse impacts on the business which were affecting the performance and results of the company in the second half of FY2019.

In Americas, the winter storms and the decision of channel partners to reduce inventory on hand had been adversely affecting RWC’s business and operations. In the EMEA segment, the company’s call to exit certain product lines, which were sold by the core RWC business in the UK had affected the performance. The Spain business had not delivered anticipated results and had an impact on the overall segment. In the APAC region, the forecast declined in the new housing construction in Australia has affected operations and sales.

However, on the brighter side, the John Guest business in the Americas division and core RWC businesses in the UK region are making steady progress with cost synergies being realised in line with the expectations.

The previous FY2019 EBITDA range was from $280 million to $290 million, but the company revised it and stated that the EBITDA would now range between $260 million-$270 million.

Company Profile: A player from the industrial sector, Emeco Holdings Limited (ASX: EHL) has operations in all the key mining regions of Australia. The company’s clients are mining companies and contractors, dealing with coal, iron-ore, bauxite and copper. The company is the owner of Force Equipment, which is Australia’s component and machine rebuild company. EHL also owns Matilda Equipment, which is a new model ancillary heavy earthmoving equipment rental company. The company was founded in 1972 and was registered on ASX in 2006. The company is headquartered in Osborne. In its rental fleet, the company has approximately 1000 machines. 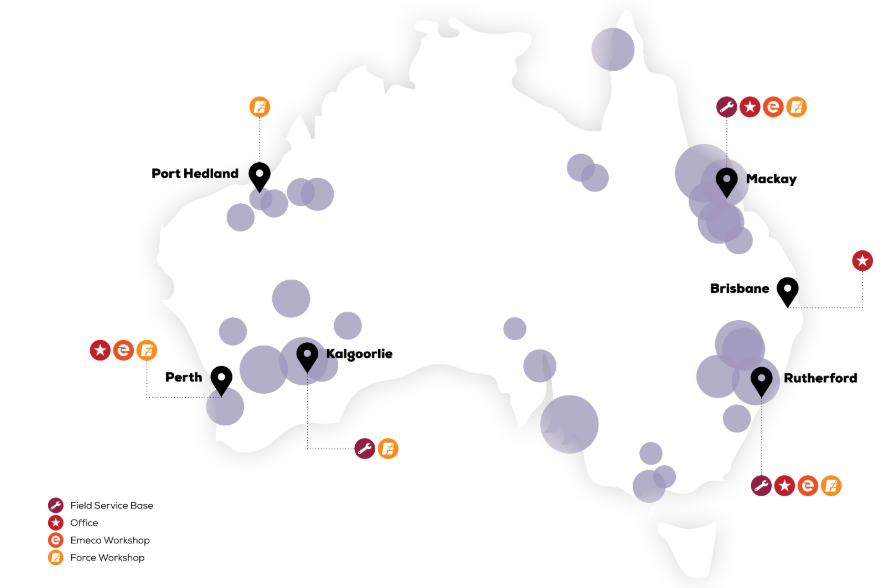 The company anticipates that it would achieve an EBITDA in the range of $211 million and $213 million, which would be up by approximately 40 per cent, on a YoY basis. The Net Sustaining Capex was predicted to amount to approximately $85 million and Growth Capex is on target to generate $25 million EBITDA in FY20. The leverage (measured as Net Debt/Operating EBITDA) has been forecasted to be 2.1x by the end of FY19, with a target of 1.0x by FY21. The ROC (Return On Capital) is anticipated to be ~20 per cent in FY19.

The company notified that thermal coal division was contributing less than 25 per cent to the company’s total revenue.

On its Fleet front, the company stated that with workshops and asset management, asset lives were extended. It resulted in the reduction of capital intensity and operating costs, while generating stronger returns.

Company Profile: An Australian retailer, Coles Group Limited (ASX: COL) has more than 2,500 retail outlets in the country. It is regarded as Australia’s first supermarket and has been in the market since 1914. Currently, the Group operates through stores and online platform as well. It was recently listed on the ASX, in November 2018 and has its registered office in Hawthorne. The group’s business includes Coles supermarkets, Coles online, Coles Liquor, Coles Express, flybuys, Coles Financial Services and Spirit Hotels. 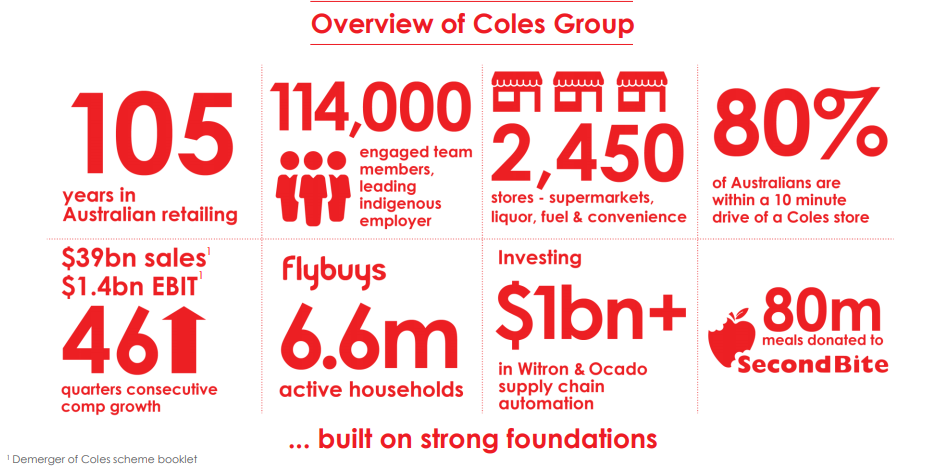 Coles Investor Day: On 18 June 2019, the company conducted its investors day and released a presentation, where it mentioned that it has a refreshed strategy which is based on three pillars- Inspire customers, Smarter selling and Win together. In the next four years, the company aims to generate revenue in line with its expectation and target approximately $1 billion of cumulative cost savings by FY23, driven by Smarter selling.

The company is pacing towards usage of technology to automate manual tasks and simplify above-store roles to eradicate duplication. This would positively impact reduction in costs of energy and labour. Coles would focus on the development of Coles Own Brand and target apt New store openings, while eyeing at the growth of Coles Online with the aid of Ocado partnership.

Coles Net capex for FY19 would range between $700 million and $800 million. The company would announce its full year results on 22 August 2019.

Company Profile: The company was formed recently in 2018, as Unibail-Rodamco-Westfield (ASX: URW), which is a commercial real estate industry, and a global developer and operator of flagship shopping destinations with three main business lines- development, investment and operations. It has three categories of assets- retail, offices and convention and exhibition centres. Spread across 13 countries in two continents, the company has 93 shopping centres and has one brand- Westfield. The company is listed on the French CAC 40, the Dutch AEX 25 and the Euro Stoxx indices, apart from ASX, where it got listed last year in May. The company’s registered office is in New South Wales.

The company also announced that, on 27 June 2019, a member of the company’s Supervisory Board, Mr Roderick Munsters, purchased 300 stapled shares and Class A WFD Unibail-Rodamco N.V. share at €126.10 per stapled share, for €37,830.

On 26 June 2019, the company announced that it had made a new placement of a 30-year €500 million bond offering, which has a 1.75 per cent fixed coupon. With this placement, the company is the first ever REIT to issue a 30-year note in the Euro bond market, with the lowest coupon ever for a Euro issue.