As per the companyâs quarterly results for the three months to March 2019, DigitalX had cash, listed digital assets and fund units with a total value of ~USD 5.77 million.

Token Advisory- DigitalX continued to offer Initial Coin consultancy to clients such as Bamboo, Bankorus and Human Protocol. Lately, the company has also been planning and working to begin with Security Token Offerings (STOs) to clients as the market for the same has been maturing. 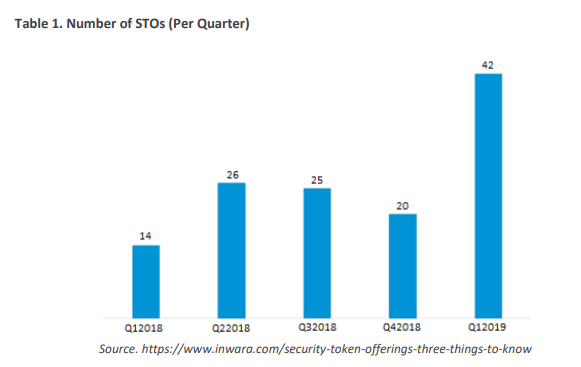 According to the latest update, DigitalX has achieved significant headways in establishing its network in the Mediterranean nation, Malta, which has recorded the highest cryptoasset exchange trading volumes in the recent months. The company is also undertaking consistent and rapid due diligence to expedite the receipt of a Virtual Financial Asset license from the Malta Financial Services Authority. This would enable the company to benefit from the opportunities that Malta has to offer in the Blockchain market.

Blockchain Consulting - DigitalX supplied its smart contracting services for BAM based in Singapore to launch XGold. The Company is focused on expanding its business by conducting boardroom workshops for company officials to teach them how to incorporate blockchain in their business and will be utilising the Perth Blockchain Centre to undertake services.

DigitalX Asset Management â This division is primarily focussed on formulating and developing new investment product strategies, collaborating and growing its distribution network across the Americas and Europe. In addition, the marketing activities were reconstructed for the Australia-based cryptocurrency fund in response to the interest received from the market. Post a year of operation, the fund successfully beat the benchmark top 20 cryptocurrency index.

Media and Education âCoincast Mediaâ- Coincast Media is DigitalXâ JV with Multiplier Media. The division reported consistent growth in the media publishing and investor relations business, amidst globally soft market conditions in the media sector. During the quarter, DigitalX and DIVAN.TV, an international streaming service, signed an agreement for the rebroadcast of Coincast TVâs Season One. Coincast Media is also holding discussions with several other broadcasters, like OTT streaming services, to work on the next series of Coincast TV.

Outlook- DigitalX is strongly positioned to take advantage of the renewed optimism in cryptoassets.

The company announced on 15 May 2019 that its Share Purchase Plan was massively oversubscribed (accepted), raising a total of AUD 2,460,000. Meanwhile, the company also reported that it had received firm assurances for an additional Placement to raise ~AUD 1,290,000. This brought the total capital to be raised to ~AUD 3.75 million. Patersons Securities Limited was appointed as the Lead Manager and Underwriter to the SPP and Lead Manager to the Placement.

The Shares pursuant to the Top-Up Placement and SPP have been issued at $ 0.0677289 per share, at a twenty percent discount to the VWAP traded on the ASX in the prior five days to 15 May 2019.

The proceeds from the SPP and Top-Up Placement have been indicated to be utilised towards the evaluation of potential investment and acceleration opportunities and to cater to the companyâs general working capital requirements.

The SPP and the Top-up Placement were announced on 16 April 2019 when DigitalX also informed to have secured a blockchain services agreement with Bullion Asset Management Services Pte Ltd (BAM), a gold backed stablecoin management firm.

Singapore-based BAM is into the creation of a cryptocurrency stablecoin called XGold (which is backed by Gold). DigitalX reached a Terms Sheet agreement with BAM to acquire up to ~17.5% equity interest in BAM via an investment of cash and DigitalX shares at 8.5c. Under the agreement, DigitalX is to provide its blockchain technical services, media and PR, blockchain auditing, corporate advisory and exchange listing introductions to expedite the success of XGold. In return for the services, DigitalX has inked services agreements for a sum of AUD 380,000 and 200,000 shares in BAM.

On 7 May 2019, DigitalX informed the stakeholders that it had finalised the legal proceedings, concerning an Originating Application and Statement of Claim lodged by a group of parties regarding their investment in an initial coin offering to which DigitalX was a consultant. The Claim involved a total amount of ~USD 1,833,077 and damages.

While DigitalX denied all claims in its defence, the company entered into a settlement deed to be fully free from the scenario and declared to pay AUD 250,000 within two business days and a further AUD 150,000 (plus interest) by 1 July 2019, out of its current cash reserves.

DigitalX also added that it would issue shares for a total value of AUD 350,000 in three tranches within six weeks after the date of the settlement deed.

On 3 April 2019, the company announced the appointment of Stephen Roberts as Non-Executive Director of the Company, effective immediately. Mr Roberts holds an extensive prior experience with several listed and private enterprises from the financial services, agriculture, bio-pharm logistics, and waste recycling sectors. Throughout his career, he has provided his advisory services to various well-renowned large investment, superannuation and financial service firms.