Arena REIT reported a 9% year-on-year increase in net operating profit (distributable income) for FY2019 to $ 37.7 million. Growth in the net operating profit was attributed to increased rental income from annual rent reviews and income from new investment in operating properties, in addition to the completion of development projects during the financial years, 2018 and 2019. The company’s statutory net profit for the period declined by 8% to $ 59.3 million, as a result of the revaluation of interest rate hedges. Earnings per share went up by 5.3% to 13.8 cents during FY19 when compared with the same period a year ago. For FY19, distributions per security also increased by 5.5% year-on-year to 13.5 cents.

ARF reported an increase of 14% in total assets to $ 825.7 million, mainly driven by acquisitions, development capital expenses as well as the positive revaluation of the portfolio. The 7% growth in net asset value per security to $ 2.10 at 30 June 2019 was majorly attributed to the revaluation uplift. The balance sheet of the company witnessed a growth in net assets from $ 531.643 million in FY2018 to $ 610.330 million in FY2019. Growth in net assets was driven by a significant increase in total assets during the period.

ARF’s syndicated borrowing facility limit grew to $ 280 million in the financial year 2019, representing an increase of $ 50 million. The FY2019 syndicated borrowing facility limit comprised of $ 130 million scheduled to expire on 31 March 2022 and another $ 150 million due for expiry on 31 March 2023. The company completed fully an underwritten institutional placement in May 2019. Through the placement, the company was able to raise $ 50 million. Moreover, via a share purchase plan, it raised $ 16.4 million, and the shares were issued after the end of FY2019. 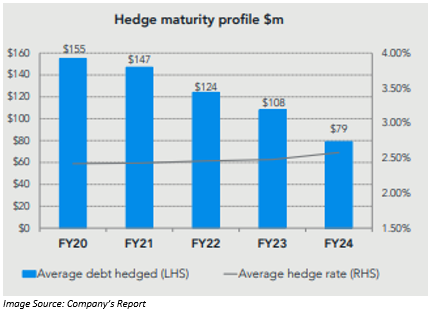 Corporate Governance: The company also released its corporate governance statement for the period ended 30 June 2019, under which it focused on several aspects as well as provided a list of board members as highlighted in the below table: 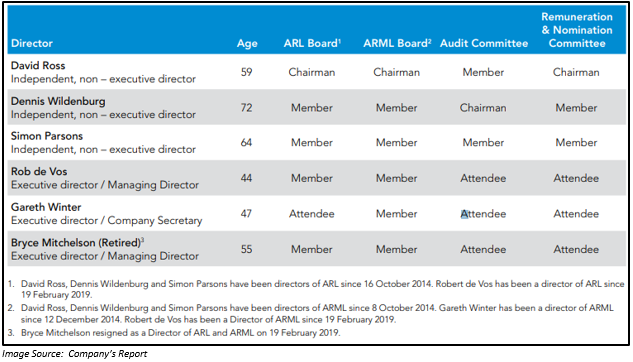 Outlook for FY2020: The company expects its distribution to increase by 5.9% year-on-year to 14.3 cents per share in FY2020. Moreover, according to the FY2020 outlook, annual rent is expected to grow, of which market rent reviews would include ~ 8% of income in FY2020 and ~ 9% of income in FY2021. As at 30 June 2019, the company has $ 50 million worth of development pipeline, which includes 9 ELC projects. The company would also be looking for new investment opportunities during the financial year 2020. It would invest in those opportunities that fulfil the preferred property characteristics of the company. 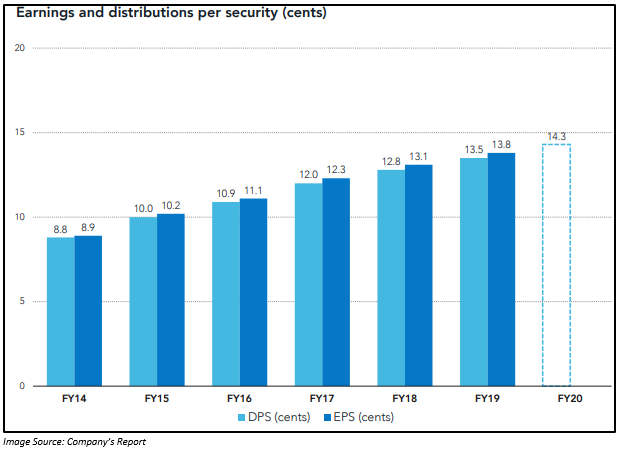 Rosemary holds more than 30 years of experience in the Australian property sector as well as extensive senior management experience in property finance. She was earlier holding the position of an independent director of Aconex and Wallara Australia. She was also the CEO of Housing Choices Australia. Rosemary has also worked as a senior property finance executive as well as a fund manager for trading and investment banks like National Australia Bank Limited (ASX: NAB), Australia and New Zealand Banking Group Limited (ASX: ANZ) and Macquarie Bank.