Acquaint Yourselves with Five Wealthy Investors of Australia

An investment strategy is considered best that suits the investor’s requirement and their risk tolerance. Investors often follow the footsteps of leading investors to generate a better return in the future.

When it comes to investment, a name that comes in mind of any investor is Warren Buffett, deemed to be the greatest investor in the world and a self-made bnaire.

He follows a straightforward philosophy- Not to speculate, invest in quality firms and hold stocks for a extended time. He believes in investing in a great company at a decent price instead of investing in decent company at a great price.

Every investor follows a different way/strategy of investing. In this article, we would know about 5 wealthy investors in Australia.

Richard Fish is one of the best investors in Australia, though he is retired now. He, along with his partner Sam Shepherd and his team, had a 10-year track record in investing. Since the inception of the Bennelong Long Short Equity Fund (BLSEM) strategy in 2002, the fund has provided its investors almost ten times the funds they invested.

It’s overwhelming for an investor when their money increases 10-fold and the question arises- how did he help the investors in increasing their money ten times? In the context of our discussion, the answer to this question is that- Richard Fish was trading over Listed Investment Company (LIC), which is a listed investment vehicle giving entry to a diversified portfolio of shares in other firms listed on the stock exchange.

This indicated that betting on one stock against the other in which Richard "Dick" Fish was an expert is fruitful (The concept is known as shorting).

BLSEM seeks to reduce market risk in the construction of its long/short portfolio by applying a limited market exposure strategy. The bottom-up fundamental research process focuses on looking for key drivers of company profitability to produce excess returns for investors.

Sam Shepherd also ranks amongst one of the best Australian investors, and as highlighted above, was Richard Fish’s partner. These two fund managers were behind the success of BLSEM that provided institutional investors with an annual net return of over 18% between February 2002 and September 2015.

Sam joined BLSEM in 2012, and at that time he had almost 21 years of experience in Australian equities. Post the retirement of Richard Fish, Sam Shepherd retained the responsibilities of managing the portfolio and the team which comprises of:

Kerr Neilson is amongst the best Australian investors and is the co-founder and managing director of Platinum Asset Management. He was born in Johannesburg, SA, and completed his Bachelor of Commerce degree from the University of Cape Town.

He began his profession in financial management in the investment department of Courtaulds, London. In 1973 he came back to SA and after a decade, shifted to Australia to become the head of retail funds management for Bankers Trust Australia (which is now known as BT Australia).

In 1994, he received support from Georg Soros in establishing Platinum Asset Management fund that focuses on international equities and has around US$16 bn FUM.

Kerr Neilson is often compared to Warren Buffett for his ability in choosing high-performing shares. He has a net worth of over $1.2 bn.

Robert Dobson Millner is one of the best investors in Australia, born in 1950 and is the head of various large companies. He is the Chairperson of Washington H. Soul Pattinson (ASX: SOL), Brickworks Limited (ASX: BKW), New Hope Coal, Choiseul Investments and NBN Television.

After school, he started working as a stockbroker for 2 years. Since 1998, he has been the Director of Milton Corporation Ltd (ASX: MLT) and in 2002, was chosen as the Chairman. Milton Corporation is a publicly owned investment manager, and it invests in public equity and fixed income markets of Australia. Other than this, the company also invest in real estate, trusts as well as mortgages. He was also the Chairman of the Investment and Remuneration Committees and has immense exposure in the investment industry. He has a net worth of over $1.30 bn. 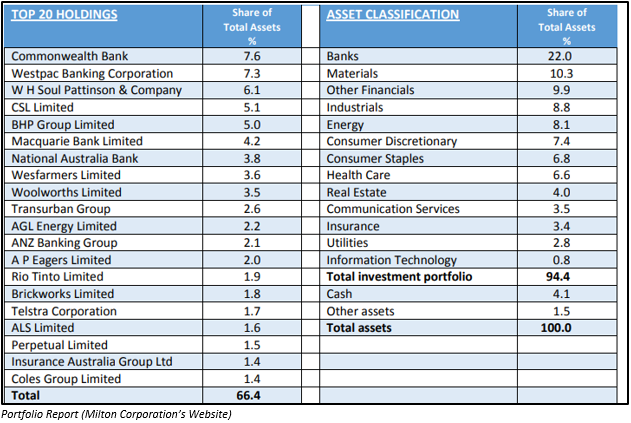 Geoff Wilson AO has more than 39 years of experience in the investment market and has held several senior investment positions in the UK, the US and Australia. At present, he is the Chairman & Chief Investment Officer of Wilson Asset Management (WAM) Capital, WAM Global, WAM Leaders, WAM Research, WAM Microcap and WAM Active. Wilson Asset Management is investment manager that was established in 1997 and is owned independently.

5 Wealthy Australian Investors at a Glance: 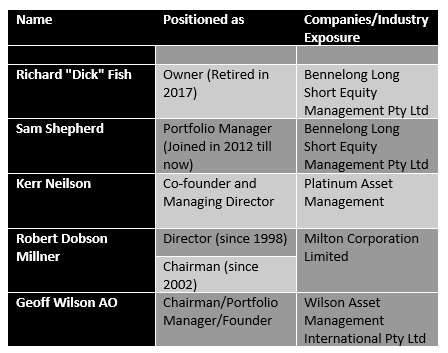