Acquaint Yourself With Recent Developments Of BRB, DNK and CXZ

With the reporting season prevailing, it is important to be vigilant regarding the occurrences in the stock market. Perhaps the favourite month for market enthusiasts and shareholders, August brings in more than just earning reports of the ASX-listed companies. It is the month of announcements of the future prospects and revised goals that companies set for themselves. These are catalysts which drive market participants to form their analyses and make investing decisions.

Given the dire need of keeping oneself updated at the time of stock indulgence, we have cherry-picked three stocks, that have recent announcements/developments that should be given attention to. We would browse their stock performances on the ASX, and acquaint ourselves with the business of these companies:

Company Profile: An Australian gold explorer, focused on discovering and developing large new gold deposits, BRB is based in Perth. Two of the company’s projects include Lake Roe Gold Project and Ularring Gold project. BRB was listed on the ASX in 2012 under the metals & mining group.

Regarding it as Australia’s next significant greenfields gold development, Bombora gold discovery is located 100km east of Kalgoorlie in WA and there has been at least one lode discovery each quarter for the last 3 years along with 226,600m of RC and diamond drilling. 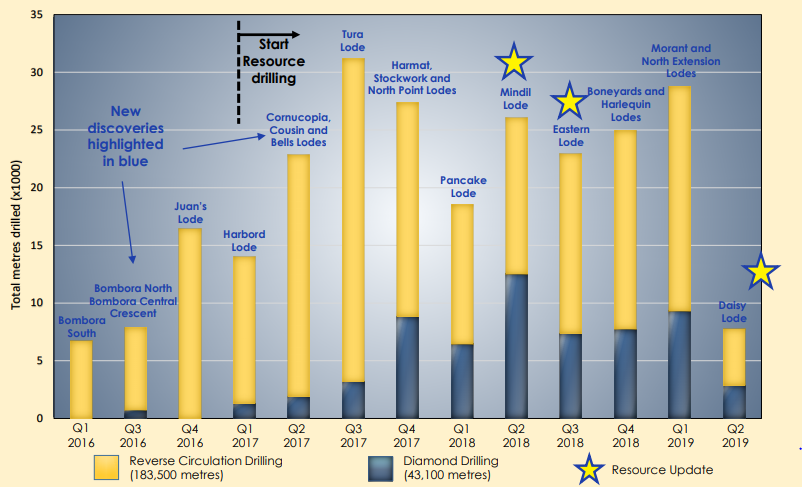 At the Lake Roe gold project, mineral resource update is almost complete. An independent review of the updated resource model is underway, which would be published in the next three to four weeks. BRB is targeting a single large open pit up to 2.5km-long and ~250m deep, with an open pit mining potential already established. The significant gold exploration to date was limited to ~10 per cent of 600km2 Lake Roe Project area.

Stock Performance: Post closure of trading hours of 5 August 2019, BRB’s stock was valued at $ 0.385, down by 8.33 per cent relative to its last trade. With a market capitalisation of A$ 85.55 million, the stock traded with ~203 million outstanding shares. It has generated returns of 27.27 per cent and 18.31 per cent in the last three and six months, respectively and the YTD return is 20 per cent.

Company Profile: Dual listed on the ASX and LSE, DNK is focused on the development of the Colluli Potash Project, located in the Danakil Depression region of Eritrea, East Africa. Colluli Mining Share Company fully owns the project. Colluli Mining Share Company is an equal JV between DNK and the Eritrean National Mining Company. At the project, over 1 billion tonnes of high grade potassium bearing salts have been identified since the drilling began in 2010.

Grant of Credit Approval: Acknowledging the importance of credit approval as a critical project financing and execution milestone, on 5 August 2019, the company pleasingly informed that Africa Finance Corporation and African Export Import Bank had been granted with a formal credit approval to provide the Colluli Mining Share Company with USD 200 million in senior debt finance, which is part of the project funding package used for the development and construction of DNK’s Colluli Potash Project.

Subject to completion of final documentation and conditions precedent to drawdown, the debt finance would be underwritten by the mandated lead arrangers and includes the formal nod of export credit support from the Export Credit Insurance Corporation of South Africa SOC Limited.

Presently, DNK is evaluating options for funding the balance of the capital required to bring Colluli into production and is under advanced discussions with potential strategic investors, while Standard Chartered enacts the company’s financial adviser.

FCA's Disclosure and Transparency Rule 5.6.1(R): In accordance to the Rule, the company notified on 1 August 2019 that its issued share capital consisted of 264,422,398 ordinary shares of no par value, with each share carrying the right to one vote, as at 31 July 2019, and had no shares in treasury.

Stock Performance: Post close of trading hours of 5 August 2019, DNK’s stock was valued at $ 0.710, up by 1.42 per cent relative to its last trade. With a market capitalisation of A$ 185.1 million, the stock traded with ~264 million outstanding shares. It has generated negative returns of 10.26 per cent and 9.09 per cent in the last three and six months, respectively and the YTD return is a negative 5.41 per cent.

Company Profile: An Internet of Things (IoT) technology company, CXZ has its focus on the smart car technology for the automotive industry. The company has commercial arrangement with leading players in the auto sector. These leading auto players use the company’s proprietary smart car technologies. Two flagships SaaS products of the company are CXZ Telematics and miRoamer. CXZ was listed on ASX in 1974 and has its registered office in Melbourne.

New on Board: On 5 August 2019, the company pleasingly notified about a new addition to its Board. Mr Guy Perkins would be joining as the new Managing Director, w.e.f. 2 September 2019. Presently, he is serving as Non-Executive Director of Soar.

Currently, the company is focussed on building an executive team to drive growth in its present US fleet telematics business of more than 70,000 subscribers. Besides this, CXZ is expanding into other global markets, including Australia.

Quarterly Activities Report: On 26 July 2019, CXZ released its quarterly activities report for the quarter ended 30 June 2019, stating that it had finalised the implementation of the Courtesy Transportation Program and Cadillac Courtesy Transportation Alternative program. There was a reduction in the commissioning and dealer orientation issues, which hovered earlier, resulting in a significant reduction in support enquiries being achieved.

On the financial end, there was an increase in subscription revenue to $ 1.6 million for the quarter, up from the $ 1.3 million revenue which was recorded in the previous quarter. Sales revenue amounted to $ 1.7 million. As outlook, CXZ notified that subscription revenues are likely to continue with a monthly run-rate in the order of $ 550k-$ 600k per month with strong operating margins. The cash receipts from customers for the quarter amounted to $ 1.5 million, up from $ 336k in the previous quarter. The cash position as at 30 June 2019 was $ 939k.

The below table outlines the cash flow statement of the company, for the quarter ended 30 June 2019:

Stock Performance: Post close of trading hours of 5 August 2019, CXZ’s stock traded flat at $ 0.022. With a market capitalisation of A$ 18.7 million, the stock traded with ~850 million outstanding shares. It has generated positive returns of 83.33 per cent, 100 per cent and 120 per cent in the last one, three and six months, respectively, and the YTD return is 83.33 per cent.