The diverse digital world of present time has undergone a tremendous transformation in the past few years. Amid the contemporary times, is a platform which is synonymous with connectivity, communication and information. Businesses of the digital platforms have surpassed changes, both good and bad. Competition, consumers and society have had their share of consequences driven by the functionality and a degree of changes that the digital world has unfolded with time and continues to do so.

Google, Facebook, Instagram, YouTube, Tumbler and Yahoo are everyday must mention in conversations and have a vital role to play in everybodyâs lives. The impact has triggered government and regulatory authorities, both to keep a close watch over these platforms, to ensure the security and apt usage of the digital platforms. The recent times has been a phase of inquisitiveness about the impact and role of digital business in Australia and other jurisdictions. With growth in the business and broadening of the technological spectrum, competition, security of privacy, copyright concerns, data content and the role of media have all been burning aspects that have led the governments and regulatory bodies to delve into the digital world and draw conclusions, which can be further scrutinised and implemented, as and when found necessary. 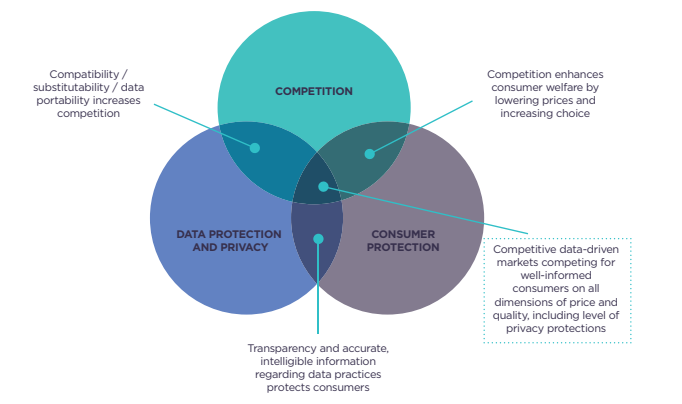 The Australian Competition and Consumer Commission (ACCC), is an independent regulatory and consumer law authority of the Australian (presently Morrison) government. After commencement in December 2017 and post a preliminary submission a year later in December 2018, on 26 July 2019, it released its final report titled âDigital Platforms Inquiryâ wherein it presented the inferences from its 18-month investigation into Facebook and Google's virtual supremacy and the effect on other digital forums. The release of the report would be followed by a 12-week consultation process, as the Morrison government agrees with ACCCâs conclusion that reform is the need of the hour. The final government report is expected to be furnished and released by the end of 2019. Apart from its inferences, the ACCC has outlined 23 recommendations, that revolve around competition law, consumer protection, media regulation and privacy concerns. 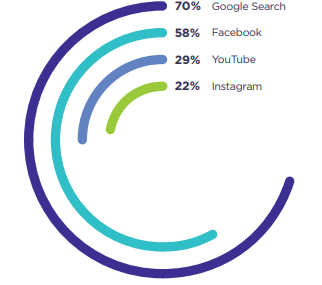 In particular, Facebook and Google, two of the largest digital platforms in Australia, are anxious about the steps that the government would undertake post the reportâs release and analysis of recommendations. Before we understand these recommendations, let us get attuned to the digital dominance of these two powerhouses in the country: 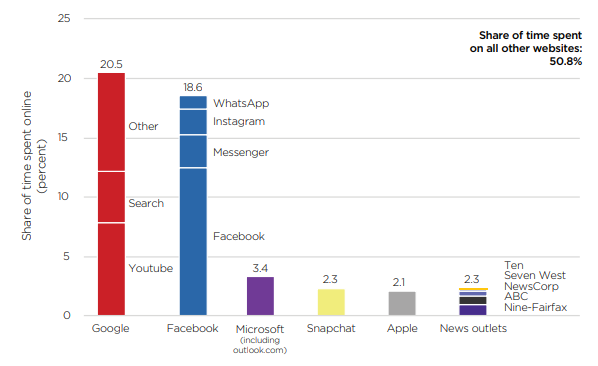 The above graph needs no clarity about the fact that Google and Facebook rule Australiaâs virtual world, outperforming any other digital platform. Australians spend the majority of their time on the various dimensions that are offered exclusively by these two platforms. Hence, it is important to notice two aspects- firstly, both these platforms have a major influence on the daily lives of people and businesses that are hunting Australian users and secondly, the user engagement on these two platforms shows no sign of a slowdown.

Google and Facebook are multi-sided platforms but cater consumers with different services. The commonality between the two platforms is the fact that they generate a major chunk of their revenue through advertisements, even though they offer services to users at zilch monetary price in order to obtain consumersâ attention and data, which they eventually monetise.

According to the ACCC, the dominance of Google and Facebook is vastly driven by the fact that they acquire potential competitors and create economies of scope by controlling data sets.

The recommendations made towards Facebook and Google in Australia

In its report, the ACCC stated that it was not against the digital platforms pursuing growth and profitability. Its concern is centred around the belief that policy makers, and society must be wary of the fact that the actions of digital platforms, like all businesses, is backed by a profit motive. Even though digital platforms do not intend to cause issues to the society or their users, they are succumbed to do so within their profit models. This is the brink where policy makers and regulators should consider and set limits, curtailing the distribution of information, ensuring security by appropriate collection of personal data and businessâ interaction propaganda with consumers online.

Let us look at the major recommendations that the ACCC had made, that is making headwinds amidst the Google and Facebook business and market participants in Australia:

It would be interesting to witness the changes that Facebook, and Google undergo post these recommendations, and how well are these channelized for the companies, users and the virtual world.