Seafood processing company, Tassal Group Limited (ASX: TGR) recently released its FY20 (year ended 30 June 2020) trading update wherein it announced that it is on track to deliver 2,400 tonne harvest biomass for FY20. TGR expects positive market dynamics for both salmon and prawns to continue in FY20. The total capital expenditure, including the acquisition of Exmoor Station, is expected to be $156 million in FY20.

The companyâs strategy of optimising the growth and biomass of salmon by leaving them in the water to grow in the key growing time of July to October has caused the YTD export sales to decline, compared to pcp, which reduced Tassalâs exposure to export prices.

The companyâs FY19 financial performance is summarized in the below image: 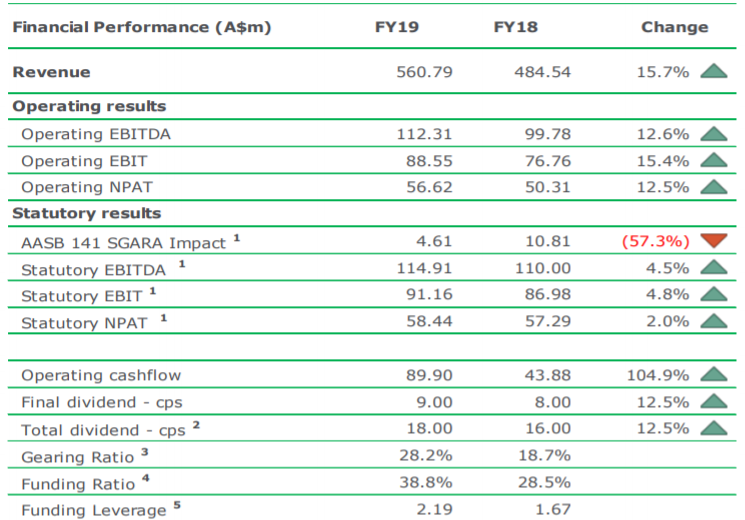 Australiaâs leading producer of Tasmanian grown Atlantic salmon, Huon Aquaculture Group Limited (ASX: HUO) is primarily involved in hatching, farming, processing, sales and marketing of Atlantic salmon and ocean trout. In FY19 (year ended 30 June 2019) the company delivered revenues of $282 million, supported by an increase in salmon prices which were underpinned by a shortfall in supply.

During the year, the companyâs sales volume fell by 18% on the previous year mainly due to a significant reduction in biomass at the commencement of FY2019 following challenging operating conditions over the previous summer. During the year, the companyâs operating margins declined from 22.6% to 16.8% as a result of the lower sales revenue and increased per kg production costs.

The company is currently in the early stages of developing Yellowtail Kingfish operations in Western Australia and have initiated a 2-year environmental monitoring program to assess if its new lease site.

At the recently held AGM, the company assured that it is positioned to almost double production capacity over the next 3 to 5 years and is focused on driving operating efficiencies through the business. The company currently has fish in production that will support a 30,000 tonne production in FY2021.

For the 12 months reporting period to 30 June 2019, Seafarms has reported a loss in the order of $30.9 million, of which approximately $3.9 million was contributed by the Queensland operations. The Queensland loss was substantially impacted by the lower first half production outcomes as a direct result of poor wild black tiger broodstock availability, an ongoing and industry wide issue in FY2019 and as a direct consequence lead to a higher proportion of banana prawn production.

In FY19, the companyâs Spencer Gulf Hiramasa Kingfish remained the market leader in Australia and Europe with sales volumes growth of 13% and sales revenue growth of 16%. During 2019, the company continued to strengthen its competitive position in both its existing and growth markets through the Companyâs Chef Activation Program, and by promoting its SensoryFresh products in Europe, North America and Asia.

Clean Seas believes that it is on the right trajectory to achieve the scale required to deliver on its âVision 2025â. In the next three years, Clean Seas will be focused on further increasing the scale of its operations to become cash flow sustainable and globally competitive. The company intends to increase its annual sales of ocean farmed Kingfish by around 50% to 4,000 tonnes by FY22, primarily via market share growth in North America and Asia leveraging SensoryFresh. The company seeks to achieve a sustainable reduction in the cost of production through scale, investment in automation and selective breeding. The company is planning to expand annual sales of ocean farmed Kingfish to 5,000 â 6,000t by 2025.