Calculating loan serviceability implies if the borrow is able to repay the loan at the floor rate set by the bank.

Letâs have a look at Westpac Banking Corporation in some detail below:

Westpac Banking Corporation (ASX: WBC) is one of the leading banks in Australia and it provides broad range of banking, financial and related services. The Group has four customer facing divisions:

The market capitalisation of the bank stands at A$104 billion as on 24th September 2019.

Westpac Group CEO, Mr Brian Hartzer, announced that Peter King, bankâs CFO has decided to retire in 2020 after a career of 25 years. Mr King has been the CFO of the company for five years and prior to his current role, he served as Deputy CFO.

Class Action Filed Against Its Subsidiaries:

Westpac confirmed that it had received a class action filed by Slater and Gordon on behalf of Ms Tracy Ghee against its subsidiaries including Westpac Life Insurance Services Limited (WLIS) and BT Funds Management Limited (BTFM) in relation to aspects of BTFMâs BT Super for Life cash investment option. The claim has been filed. 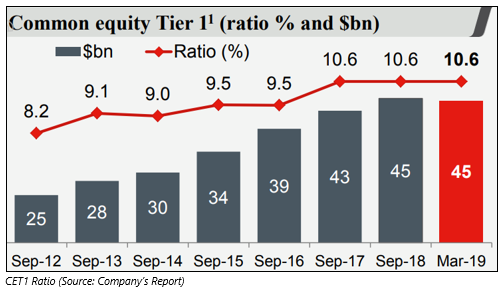 WBC has continued to keep its balance sheet strong across all dimensions: 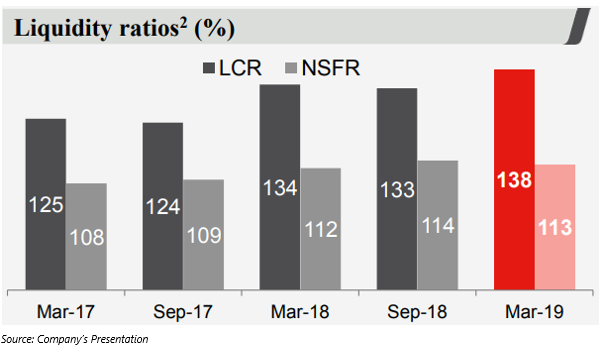 WBC has declared an interim dividend of 94 cents per share which is fully franked dividend. This makes the payout ratio of 98% with a dividend yield of 6.31% (as per ASX). The dividend reinvestment plan will apply with a 1.5% discount to the market price. 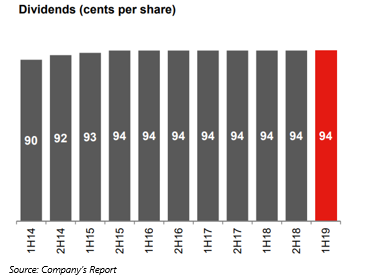 CEO of the WBC, Mr Hartzer stated that the Australian economy will remain subdued with GDP growth rate to be around 2.2%. The consumers were cautious because of flat wages growth and softening of house market.

WBC expects that the house prices are expected to remain subdued and home building is set to reduce through 2019 and 2020. System housing credit growth is expected to slow to 3% in the current bank year and fall further next year to 2.5%.

Comparison with its peers: