With the 5G network implementation around the corner in Australia, the buzz is all about the telecom stocks and their performance. Let us have a detailed glance of the stock and financial performances of the two telecom giants, 5GN and TPM in its space.

5G Networks Limited (ASX: 5GN) has an engagement in Digital, Cloud, and Data Networking opportunities that improves its business, both organically and in-organically.

The company has increased its available debt facility with Commonwealth Bank of Australia (CBA) to $7.2 million. This increased facility provides 5GN with the additional firepower, should the appropriate acquisition be presented. 5GN will continue to explore and pursue accretive acquisitions in the categories, including data centre facilities, managed service providers and AWS partners and software development companies.

The Managing Director of the company, Joe Demase, stated that it has developed a strong relationship with CBA, who fully understand the business model and support the growth strategy of the company. The climate for accessing funds in the current market has become challenging, and the company is extremely pleased with CBA’s clear demonstration of continued support for 5GN. This increased debt facility and the recent capital raise of $8 million offer the flexibility for 5GN to continue to execute its strategy, and confidently expand in the current market.

The strong results of the company are in line with the expectations for the 5GN business, which are inclusive of new accounting standard changes contained in AASB 16 and all abnormal acquisition costs of Anittel and Hostworks, which were finalised in Q1 FY19. Moreover, the company delivered a strong performance with quarterly cash receipts of $15.4 million, up by 8% on the previous quarter, with YTD cash receipts at $38 million, a significant increase of 11 times greater than the previous period last year.

The company will continue the synergies with Anittel and Hostworks on the back of leveraging the full benefit of 5GN people, systems and process functionality throughout the new entities. The management is of the opinion that strong financial performance, including the trend of EBITDA growth will be continued in FY19.

On the operational front, going forward, the company will continue to execute, develop and deliver results which support revenue and EBITDA growth. The company will fund the future capital investment through operational cash flow and is linked in tandem with the customer demand, which is demonstrated with total capital spend of $398k for the first half. Moreover, improved operating efficiencies by rationalisation of systems will continue cost reduction in H2 FY19.

The Nationwide network is on track for H2 FY19 launch. Nationwide high-speed network launching will be completed in H2 FY19. The fixed wireless rollout is also going ahead as planned with the successful expansion to five sites across metropolitan Melbourne.

The stock has generated significant YTD return of 190.48%. With an established banking facility with CBA to support current and future funding requirements, strong sales and EBITDA growth and recent developments in cash flow position, the fundamentals of the company look decent. Against the backdrop of strong operating cash flow and $1.3 million franking credit in 1H FY19, the management provided a strong level of confidence to issue a full year dividend payment.

The Australian Competition and Consumer Commission (ACCC) recently disagreed the proposal of a merger between TPG Telecom and Vodafone, on the back of the view that the prices would fall if TPG enters the market as a new mobile operator since it is a strong potential competitor in the mobile industry.

As updated by TPG in the recent past, a claim of statement has been filed by the company with the Federal Court to request approval for the proposed merger. TPG lodged the proceedings claiming that the proposed merger will not result in a substantially lower competition. Moreover, Vodafone Australia has recently filed a statement of claim as well with the Federal Court for the same purpose. 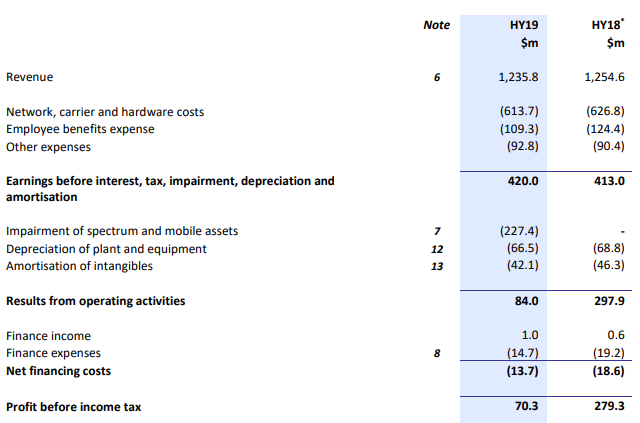 The impairment expense recognized by the company stood at $227.4 million during 1H19, based out of the decision of the Group to stop the rollout of its Australian mobile network.

The net operating cash flow after tax for the group stood at $333.0 million during the first half of FY2019. The total capital expenditure for the company during the half year stood at $556.7 million. The CapEx included a $352.4 million instalment for the 2x10MHz of 700MHz spectrum acquired at auction in the year 2017, $66.1 million invested in the Australian mobile network build, which is currently ceased, and $39.8 million in the Singapore mobile network build.

The remaining ‘business as usual’ (BAU) capital expenditure stood at $98.4 million, which was $64.7 million lower than the first half of FY18 after the substantial completion of the fibre expansion for the VHA fibre contract. The net debt stood at $1,567.6 million during 1H FY19 along with a leverage ratio of ~1.85 times the underlying annualised EBITDA.

As per the update of the company, the progress on the mobile network build in Singapore is satisfactory. A nationwide outdoor coverage performance result of more than 99 per cent was achieved by the network. This was well above the required milestone of 95 per cent needed to be met by the end of 2018. TPG launched a service trial during the month of December 2018, which allowed the customers to trial the network for free of cost for twelve months along with network coverage enhancement work continuing parallelly.

The positive feedback received from the initial trial customers leads to the expansion of 200k users so that more Singaporeans can experience the excellent service and network quality ahead of the full commercial launch.

The interim FY19 dividend declared by the company remained consistent with the last year number of 2.0 cents per share (fully franked) and will be payable on 21 May 2019. The company suspended the reinvestment plans of the dividend until any further notice.