Investors aim to possess a diversified portfolio in order to hedge against sectoral weaknesses, which is always a threat, given the dynamic nature of businesses. A diversified portfolio, in most cases provides a cumulative return of all the sectors taken together. However, the expertise lies on the fund allocation for each sector which is based upon the investor’s coconscious.

Let’s have a look at seven diversified stocks, listed on the ASX-

Virgin Money UK PLC offers banking and other financial services across several parts of the world.

FY19 Operational Updates for the period ended 30 September 2019: VUK came up with its FY19 results, wherein the company reported net interest income of £1,433 million as compared to £1,457 million, depicting a de-growth of 2% on y-o-y basis. The company reported net interest margin at 1.66% in FY19 as compared to 1.78% in FY18 and an underlying profit of £539 million during the same period. The company reported Underlying Return on Tangible Equity (ROTE) at 10.8% and underlying cost-to-income ratio at 57%. Customer lending growth, during the year of 2.9% to £73 billion. During the year, the business reported deposit growth at 4.6% to £63.8billionn, with 7.1% growth on account of lower-cost relationship deposits at £21.3 billion.

Westgold Resources Limited is a mining company engaged in exploration, development and operation of gold. Recently, the company reported the successful completion of its demerger of Castile Resources Ltd.

Hub24 Limited provides platform for investment where the advisors and investors connect with each other. Recently, the company reported a change in the initial substantial holder wherein, one of the investor’s, Credit Suisse Holdings Limited increased its voting power to 6.28%.

O1FY19 Operational Highlights for the period ended 30 September 2019: HUB reported its quarterly reports wherein the company reported Net Inflows of $1,238 million, depicting an increase of 94% on y-o-y basis while funds under administration (FUA) stood at $14.4 billion, up 57% on pcp terms. This was catalyzed by growth in FUA via prevailing and new adviser relationships.

Guidance: The company has secured new licensee relationships during FY19 and is planning to invest in additional distribution staff to leverage the unprecedented market opportunities for increasing growth.

Nearmap Ltd offers geospatial map technology to business, initiatives and governments. On 16 December 2019, the company reported a change in the director’s interest wherein, one of the directors, Robert Melville Newman acquired 666,667 number of Fully Paid Ordinary Shares and disposed the same number at a price consideration of $1.06 per share.

With a market update, NEA announced its acquisition of intellectual property from Primitive LLC. The business updated that the recent acquisition is expected to deliver rapid extraction and disseminate roof geometry for its 3D content segment, which is likely to provide a new type of location intelligence to the users in coming days.

Nanosonics Limited is focused on R&D and marketing of innovative technologies which are used to fix infection control and certain decontaminations. Recently, the company announced the appointment of Lisa Margaret McIntyre as a Non-executive Director.

FY19 Financial Highlights : NAN announced its FY19 financial results, wherein the company reported a total revenue of $84.3 million, depicting a growth of 39% on y-o-y basis. The company reported capital revenue at $32.8 million, up by 28% on y-o-y basis. Revenue from Consumables /Service was $51.5 million, up 47%. Net profit before tax came in at $16.8 million as compared to $5.6 million in FY18. 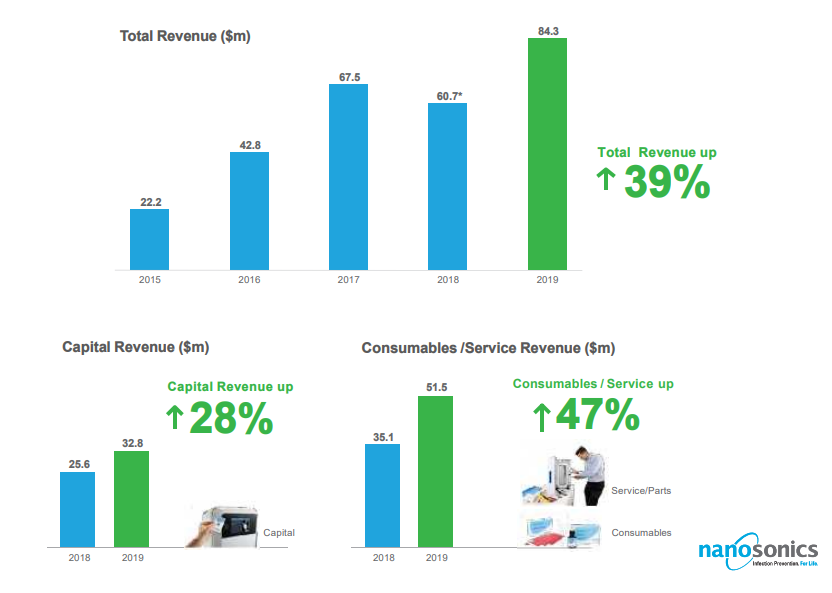 Stock Update: NAN quoted $6.700 with a market capitalization of ~$2.06 billion on 17 December 2019. The stock has delivered a positive return of 12.11% and 27.80% in the last three month and six months, respectively. The stock is available at a price to earnings multiples of 150.88x on trailing twelve months (TTM) basis.

Saracen Mineral Holdings Limited is a mining company which operates across the production and exploration of gold. Recently, the company reported a change in the director’s interest wherein, one of its directors purchased 35,000 ordinary shares at a price consideration of $2.95 per share.

The company recently reported its acquisition of 50% interest in the Kalgoorlie Consolidated Gold Mines from Barrick Gold Corporation through the purchase of 100% of the shares in Barrick (Australia Pacific) Pty Limited for a price consideration of US$750 million.

Jupiter Mines Limited is engaged in the mining activities and focuses on the exploration of Manganese.

H1FY20 Operational Highlights for the period ended 31 August 2019: JMS came up with its half-yearly reports wherein, the company reported revenue of $6.3 million, down 3% on y-o-y basis. The company reported profit after taxation at $69.2 million as compared to $108.2 million in H1FY19. The business reported a total production of 1,771,719 tonnes for H1FY20. The company is targeting to achieve 3 million tonnes for FY20.