Uber and Lyft have been in news with their drivers misusing and manipulating the app to create surge pricing and charging more from the riders, trading well below their IPO prices and posting losses post listing.

Uber and Lyft are facing state legislations in California that is likely to put limits on how businesses cam mark their workers as independent contractors and instead compel companies to consider workers as their employees.

Uber and Lyft are the two major players in the ride hailing business. For the first time keeping their rivalry aside, the two companies are coming together to address the concerns regarding the way they treat their drivers. They are seeking to prevent their drivers from being classified as employees, as any change in this would upset their business.

Let us have a look at the recent updates from these two rides hailing service providers.

Globally recognised transportation network, Uber Technologies unveils its plan to launch air taxis in Melbourne, Australia, which would be the first international trial of Uber Air.

It would be no surprise, when Aussie will commute between the central business districts and airports in a ride-sharing flight just like cabs.

Melbourne will be the first city outside the companyâs home for carrying out the trail of its flying taxis. So far, Uberâs plan is to start the test flights of its air taxis in Melbourne by 2020. The company was also considering France, India, Japan and Brazil for the third pilot city. In the near future, trials are expected in other Australian cities as well.

Dallas in Texas was announced as the first market for Uber Air at the Uber Elevate Summit in 2017, while at the Web Summit, which was held at the end of 2017, the company unveiled Los Angeles in California as the second location for running air taxis. The companyâs plan to launch its flying taxis in the international market or at a third location outside its domestic market was announced during the 2018 Elevate Summit.

Uber Air, the companyâs aviation ridesharing product for the urban market, is being developed by its Elevate team. Initially, the company plans to start offering air transportation services through small, electric vertical takeoff and landing (VTOL) aircraft between suburbs and cities, before shifting to providing the service within cities.

The service will be offered at a price of UberX. The company intends to start offering its aerial ridesharing service from 2023.

Aurora Flight Sciences, a Boeing Company, EmbraerX, Pipistrel Vertical Solutions and Karem Aircraft are the companyâs vehicle partners for the project, while some of its ecosystem partners are NASA, ESAero, Applied Scientific Research, Georgia Institute of Technology, ChargePoint and the US Army Research Laboratory (ARL) of the US Army Research, Development, and Engineering Command (RDECOM). 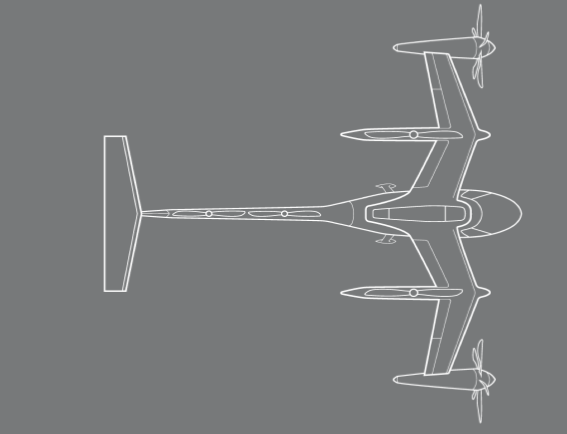 For the quarter ended 31st March 2019, the company revealed a loss of $1.01 billion, compared to a profit recorded during the same period a year ago. However, during the reported quarter, its revenue reached $3.1 billion, up 20% from the corresponding period in the previous year.

This was the companyâs first financial result release after the launch of its initial public offering (IPO) on the NYSE, which got plagued by market turbulence due to the trade war between China and the United States. The company issued 180 million shares of its common stock to the public at a price of $45.00 per share. The company started trading under the symbol UBER at the New York Stock Exchange.

Moreover, the company unveiled a daily average trip of 17 million for the first quarter, along with an annualized gross booking run-rate of $59 billion for the period. Uber is now completely focused on its strategy of becoming a one-stop solution for local transportation and commerce, according to a statement by Uber CEO Dara Khosrowshahi. 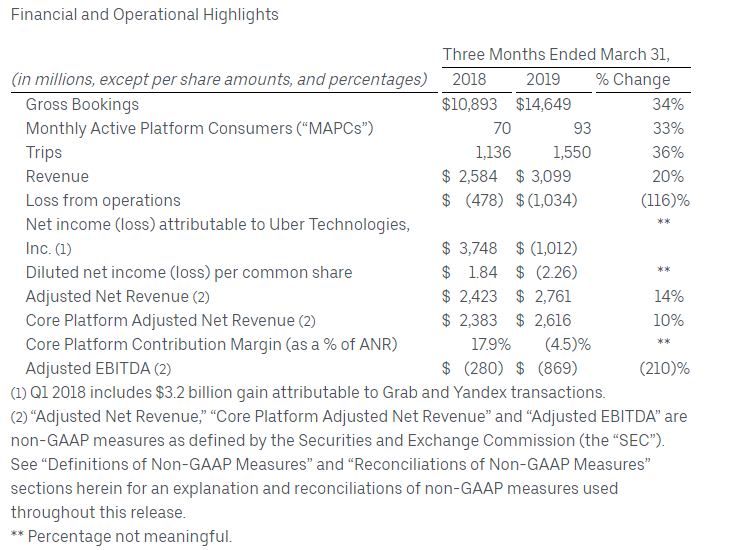 Ride-hailing company Lyft, which is located in California, United States, has 2 million drivers and more than 30 million riders. Established in 2012, the company unveiled its financial results for Q1FY19 on 7th May 2019.

The company recorded revenue of $776.0 million in the first quarter ended 31st March 2019, up 95 percent year-over-year from $397.2 million registered during the same period a year ago. However, the company incurred a loss of $1,138.5 million in Q119, compared with a net loss of $234.3 in the same period of 2018. The loss includes $894 million (covering stock-based compensation and related payroll tax expenditure). The company attributed the quarterly loss to RSU expense recognition related to its initial public offering.

Lyft declared its IPO registration statement on 28th March 2019. The company offered 32.50 million shares of its Class A common stock, in addition to up to 4.87 million shares at a price of $72.00 each share. The companyâs initial public offering closed on 2nd April 2019 on the Nasdaq Global Select Market. The started trading under the symbol LYFT.

The size of the losses reported by these two companies in the first quarter coupled with their poor openings are resulting in concerns regarding the feasibility of ride-hailing as a business.