A look At Recent updates For IT Player, MyFiziq

On 17 June 2019, MyFiziq Limited (ASX: MYQ) announced the receipt of $500,000 payment through a placement with Asia Cornerstone Asset Management (ACAM).

Earlier on 4 June 2019, MYQ announced that both the parties had agreed to alter the subscription agreement, and the company would issue a total of 8,666,667 million fully paid shares in MYQ at A$0.60 cents per share. The issue price represents a premium of 110% to the share price at the time the original term sheet was concluded.

Further, the parties would conclude a new subscription agreement to extend the payment period over the following $500,000 tranches, which would reflect a reduction of $800,000 to a total invested by ACAM of $5,200,000.

On 12 June 2019, MYQ announced the positive outcome regarding the examination of the Chinese phase of its International Patent Application for its technology for Imaging a Body. It was reported that Chinese National Phase application has advanced to grant the China Patent No CN106999107B, which would be issued by the China Patent and Intellectual Property Office. 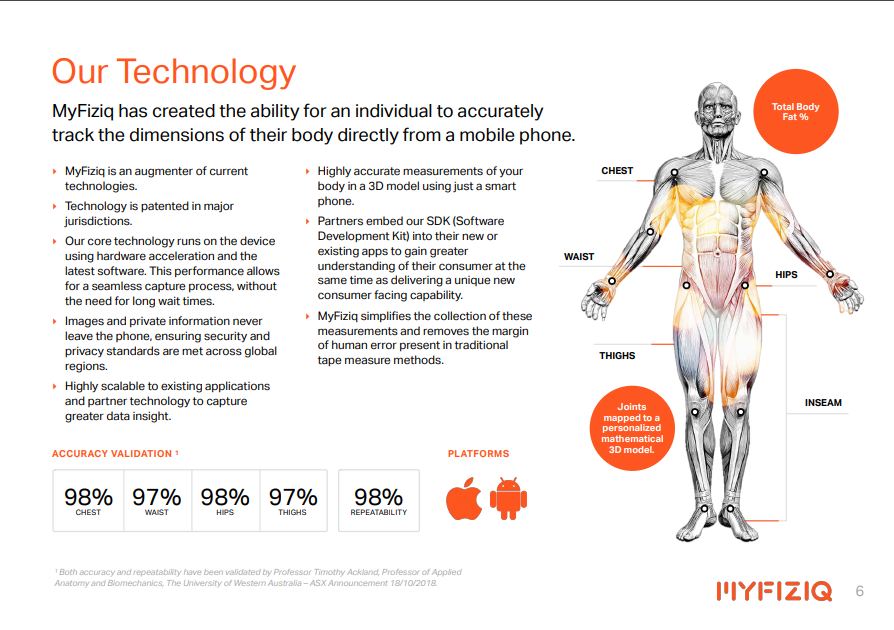 Vlado Bosanac, CEO of MyFiziq Limited, stated that the company is pleased to announce the Chinese patents to protect our patents now granted in USA, Singapore, South Korea, Japan & Australia along with the recent partnerships in the China market. He also said in line with the previous announcements; the company has accelerated the patent applications worldwide as the company rapidly moves to commercialise its technology and capitalise on its commercial position.

He further mentioned that MyFiziq would continue to pursue all other relevant jurisdictions as the patent protection is a prime step in positioning itself in the global marketplace, and the MYQ would continue to accelerate all patents in other regions to increase the protection and provide strong hold globally to MyFiziq and its unique technology. Lastly, he concluded that defending the company’s Intellectual Property is crucial to evolve the product and create value to the shareholders.

On 11 June 2019, MYQ announced the signing of the binding term sheet with Boditrax Technologies Ltd to integrate its technology in the Boditrax platform and their new consumer-facing mobile application. As per the release, the parties would enter into a definitive agreement within 60 days of the binding term sheet unless extended by mutual agreement. Also, the agreement would be subject to standard termination provisions.

MyFiziq intends to combine its revolutionary technology with the Boditrax application while Boditrax has been targeting a collaboration/release in Q4 2019. Also, the launch of the product would be accompanied by a campaign which would inform the current 6,000,000 + Boditrax users to achieve an expected initial target of 600,000 subscribers/downloads within the initial 12 months.

The announcement further read that the upgraded platform would allow users to track changes in their body dimension in the privacy of their own home by using the MyFiziq technology, along with on-site Boditrax scans and other integrations to deliver a truly comprehensive portfolio of personal health information. It was reported that MyFiziq would receive an initial US$2.50 per user, per month from Boditrax, which would be based on a 12-month subscription.

Vlado Bosanac, CEO of MyFiziq Limited, stated that the Boditrax opportunity denotes a great step in the commercialisation of MyFiziq’s technology, and Boditrax has been adding users to its platform for the past 7 years and to take the user base to 6,000,000 + in the current timeframe is a strong commitment by the company. He also said that the opportunity is very exciting, and this would be MyFiziq’s first implementation into the UK and Europe, which is promising for MyFiziq’s offering to this enormous and mature market.  He concluded that the demonstrated application by Boditrax allows a smooth pathway to commercialization with Boditrax, and MyFiziq would be supporting Boditrax for integration to accelerate the release and monetization of this commercial arrangement.

Boditrax creates digital solutions for the health, fitness and wellness sectors internationally. Its solutions are medical grade devices to allow operators a clinically validated understanding of each client's body composition, mental well-being, health goals and progress. The company is known for its accuracy and works with leading hospitals, corporations, universities, formula one, premier league and elite sports teams. Some of the clients served by the company include the National Health Service NHS (England), BBC, Sky, Rolls-Royce, Renault, Cadbury, Kellogg’s, Fitness First and Pure Gym Health Clubs.

As per the release, Boditrax is dedicated to expanding the existing client base to the 10,000k active user over the next 12 months, and its current roll outs and trials with operators and organisation posses the scale to achieve such increase in the users’ base.

Also, MyFiziq would play an integral part in the new Boditrax application offering as well as in the future expansion plans by delivering additional capabilities, which represent a key point of difference while giving the product a strong competitive advantage, within a direct to a consumer application.

As per the release, the application has been designed to tap the $47 billion global corporate wellness market, and allows the employer to engage, monitor and improve the health of its employees through digital health tracking and gamification. Also, MYQ would receive $12k per month over the next twelve months as payments, and the application would be offered to the rest of Toll’s 12,000 employees. Lastly, the launch of this application marks the landmark achievement for MyFiziq as it would be the first commercial application launch, which would generate recurring user revenues for MyFiziq.