A Look At NBN Co. and Impact On TLS, TPM and VOC

Telecom sector plays a vital role in the development of the Australian economy. The key drivers to develop the Australian telecom sector further are Fibre-to-the-Node and Mobile Broadband. The industry has planned some development initiatives in order to move forward. There is an anticipation of steady growth related to the mobile broadband market till 2023, as well as the competition within the telecom operators is having a braking effect on the average revenue per unit (ARPU). On the other hand, there is an estimation of very slow mobile subscriber growth till 2023. Every industry faces some headwinds and so does the telecom sector, including the offering of additional value on capped plans by mobile providers and the continued ongoing migration from wired to wireless telecommunications.

The industry is heavily occupied by the major players like Optus, Vodafone and Telstra as well as Tier-2 participants TPG, Macquarie Telecom and Vocus. The National Broadband Network of Australia regulates the telecom sector by making new regulations. NBN Co. (nbn) is dedicated to help and ensure that all Australians have a positive experience when connecting and using services over the NBN access network. The company is also collaborating with the industry to address unresolved issues faced by end users to identify ways to work together to resolve them more efficiently.Since its inception in 2009, the NBN Co. is involved in building, designing and operating wholesale broadband access network in Australia. It works as a Government Business Enterprise as it has been incorporated under the Corporations Act 2001.

Recently, NBN Co. released a consultation paper covering the review of industry-wide wholesale pricing. The paper was made available to over 50 RSPs, who are engaged in the sale of nbn plans to residential and business segments as well as special interest groups like ACCAN. NBN Co. is seeking to balance the industry economies with affordability and choice for customers as well as is focused on low-income earners and aged Australians by making nbn more accessible to them and the extension of dimension-based discounts till 30th June 2020 in order to provide market stability and certainty. In addition, NBN Co. is lifting the data inclusions within bundle 100 in order to help retail service providers to improve customer experience.

NBN Co. is making a lot of efforts in order to deliver the benefits of fast broadband to more Australians and is seeking ways to search new cost-effective ways for retail service providers to upgrade those who are already connected to the higher speed plans.

The research commissioned by nbn reflects that the low-income households, older Australians, renters and single person households generally have a lower incidence of connection to the nbnâ ¢ network.

Mr Brad Whitcomb, Chief Customer Officer, stated that nbn was taking decisive actions to benefit all the Australians by listening to the customers and industry. Earlier, nbn also released a consultation in 2017, wherein it introduced the industry with widespread bundles discount program and reported the broadening of its menu of option related to the pricing. NBN Co. reduced the effective price from $60 to $45 for its 50 Mbps wholesale speed at the introduction of the bundle discounts in last July. In addition, nbn witnessed an improvement in the affordability of basic services with the introduction of the $22.50 Entry Level Bundle Discount.

Currently, about 63% of customers are on wholesale speed tiers of 50M bps or above, which reflects a rise of 16% when compared to 2017. NBN Co. revealed that it was considering, among several other potential new wholesale product constructs, the possible introduction of a new 100/20 wholesale product as part of its efforts to improve the customer experience. Importantly, the company was increasing the wholesale Connectivity Virtual Circuit for the Bundle 100 and above discounts by 500 Kbps, including an increase in Connectivity Virtual Circuit to 3 Mbps from 2.5 Mbps. No change was reported in relation to nbnâs Wholesale Bundle 100 Discount, which is $65. The CVC inclusion change is all set to become effective from September 2019.

In order to provide cost certainty to the industry, nbn works through a consultation process and develops longer-term solutions for customers with low-speed requirements and low usage as the company is extending its Dimension-Based Discounts for retail service providers till 30 June 2020.

Let us have a look at the three telecommunication stocks listed on ASX wrt impact of nbn changes and their stock information:

As per a release, dated 31st August 2018, Australian telecommunications company Telstra stated that the financial year 2019 would be a very material year in terms of changes to nbn and its effects on TLS. Telstra Corporation Limited (ASX: TLS) reported that the guidance was based on the managementâs best estimates and may need to be adjusted when NBN Co. releases its Corporate Plan for 2019. As per the 1H FY19 result release, TLSâ total income, EBITDA and NPAT witnessed a fall on a Y-o-Y basis, which was in accordance with the anticipated nbnâs influence.

In addition, TPG Telecom Limitedâs (ASX: TPM) operational and financial performance was also impacted during the half-year ended 31st January 2019. TPG stated that the underlying EBITDA was affected by a loss of margin as DSL and home phone customers have migrated to the low margin nbnâs services. The fall in gross profit was on the back of the loss of home phone voice revenue and broadband gross margin erosion due to nbnâs rollout. 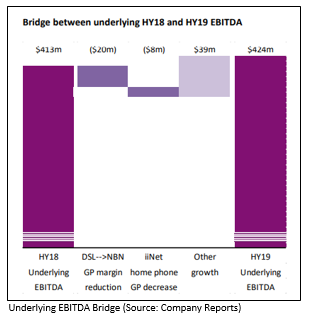 With respect to impact on Vocus Group Limited (ASX: VOC), the consumer revenues of the company declined by $46.6 million on pcp basis and stood at $350.4 million in the first half of financial year 2019 on the back of a decrease of $9.4 million in broadband revenue, driven by the overall decline of 8% in services in operation. VOC added that it was partially offset by a beneficial 3% average ARPU differential from the continued migration from copper broadband and bundles to nbn.

CLICK HERE FOR YOUR FREE REPORT!
Tags:
Telstra Corporation Limited (ASX: TLS) ASX: TPM ASX: VOC
All pictures are copyright to their respective owner(s).Kalkinemedia.com does not claim ownership of any of the pictures displayed on this website unless stated otherwise. Some of the images used on this website are taken from the web and are believed to be in public domain. We have used reasonable efforts to accredit the source (public domain/CC0 status) to where it was found and indicated it below the image.