The digital manufacturing solutions company, Titomic (ASX: TTT) is headquartered in Melbourne, Australia, and engaged in the additive manufacturing sector. Its proprietary Titomic Kinetic Fusionâ ¢ (TKF) technology is designed to perform past the limitations that are associated with additive manufacturing (3D printing) for metals and facilitate the development of complex parts without the constraints related to shape or size. 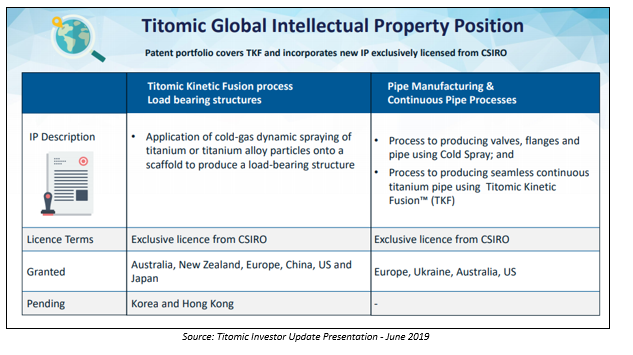 Agreement with C.A.PICARDÂ® Group- On 28 June 2019, the company announced that it had reached an agreement with German-based plastic extruder parts manufacturer C.A.PICARDÂ® Group to produce metal parts for the Extruder technology market, using Titomicâs Kinetic Fusionâ ¢ process. The technology would be utilised to for building a hardened metal extrusion screw at a preliminary cost of USD 25,965. The aim of this prototype is to reduce the current cost and test potential improvements in wear resistance.

Upon successful completion of test trials by C.A.PICARDÂ®, Titomic would negotiate a contract to supply production from its TKF Melbourne Bureau for single, twin, and multi-screw extrusion systems, which are developed by C.A.PICARDÂ® Group and distributed across more than 50 countries, with the major markets being Europe, Asia, America and the Far East.

According to the term of the Phase II Project Agreement signed with TAUV, Titomic was to supply around five prototype defense Soldier System products, for the defence personnel which would facilitate in enhancing the individual and collective safety, mobility lethality and improve connectivity. The company has successfully delivered the 5 products manufactured using the TKF AM process to TAUV for additional testing and validation under TAUVâs Soldier System exclusivity.

Healthcare company, BOD Australia Limited (ASX: BDA), based in Double Bay, Australia, is engaged in the development, distribution, and marketing of plant-based medicinal cannabis, health and supplement products, and cosmetic solutions mainly in Australia. With a market capitalisation of around AUD 23.59 million and approximately 69.39 million shares outstanding, the BDA stock is trading at AUD 0.325, down by AUD 0.015, down 4.412% with approximately 114,715 shares traded (as at AEST: 1: 23 PM, 01 July 2019).

BHC is a leading Australian distributor and supplier of medicinal cannabis products. Under the agreement, Bod Australia would be allowed access to BHCâs wholesale network and partner company, Cannabis Doctors Australia, which provides education, support and products to Australian patients and doctors seeking access to medicinal cannabis.

CDA has several established clinics and a large and expanding client base in Australia and it has successfully processed over 1,300 Special Access Scheme Category B approvals, resulting in more than 1,800 medicinal cannabis prescriptions.

CDA has commenced patient approvals for MediCabilisâ ¢ through its network and BOD Australia is expecting a strong demand from patients with prescriptions to increase over the coming months.

In the same month, Bod Australia declared that it would be supplying MediCabilisâ ¢ 5% CBD ECs315 (MediCabilisâ ¢) to sufferers of Post-Traumatic Stress Disorder (PTSD), in a landmark 12-month trial facilitated by Cannabis Access Clinics.

Pureprofile Limited (ASX: PPL), based in Sydney, Australia, provides a link between the brands and the customers across the globe by engaging them through its direct-to-consumer technology platforms. It provides extensive helpful data insights, programmatic media and performance media and delivers cutting-edge marketing solutions to more than 700 brands, publishers and research groups across the world.

Pureprofile has a market capitalisation of around AUD 1.18 million with around 117.53 million shares outstanding. PPL stock last traded on 28 June 2019 at the price of AUD 0.010, down 9.09% by AUD 0.001, with 377,528 shares traded as compared to its previous closing price. Recently, FMG Holdings Limited became a substantial shareholder in the company upon purchase of ~ 6.27 million shares, representing a voting power of 5.33%.

Recently on 25 June 2019, the company announced that it has commenced the process of transitioning from its current debtor financing arrangement with Interface Financial Group (IFG) to a new debtor financing facility.

The transition has been necessitated as a result of IFG scaling back its operations. This has resulted in a reduced volume of funding on the Companyâs invoices / receivables. Whilst the Company is in the process of arranging a new debtor financing facility, it has secured a new short-term âbridgingâ loan (the Loan) on substantially similar terms to its current debtor financing arrangement.

The key terms of the additional load incudes a drawdown limit of $ 2.6 million at the lenderâs discretion, 15 October 2019 as the maturity date, an Interest rate of 20% p.a. capitalised and compounded monthly. Besides, the Amortisation, that Is the difference between initial funding from incoming debtor finance provider and final pay-out to IFG to be applied against the principal of the Loan.

Half Year 2019 Results- The company had disclosed its half year results for the six months to 31 December 2018, posting a revenue of $ 23.8 million and a Gross profit of $ 11.0 million. There was a 16.1% reduction in the revenue mainly on account of the Performance business unit, which was scheduled to be hived off in March. Meanwhile, the Core Data & Insights business grew largely by 16%, recording a revenue of $ 9.5 million and higher gross margins of around 62% relative to other business units.

CLICK HERE FOR YOUR FREE REPORT!
Tags:
Blog BDA PPL TTT
All pictures are copyright to their respective owner(s).Kalkinemedia.com does not claim ownership of any of the pictures displayed on this website unless stated otherwise. Some of the images used on this website are taken from the web and are believed to be in public domain. We have used reasonable efforts to accredit the source (public domain/CC0 status) to where it was found and indicated it below the image.