A look At Lithium Explorers With Project Updates: LPI, INF

Growing environmental issues, technological advancements and rising population, globally, are resulting in huge demand for clean energy and cost-effective initiatives. As a result, a surge in demand for lithium is expected in the near future, supported by lithium-ion batteries’ properties like high-energy density, lightweight structure and long recharging cycles, making lithium a major power provider.

Increasing adoption of lithium-ion batteries can be witnessed in energy storage solutions, consumer electronics like smartphones and digital cameras, automobiles, among others. In addition to this, the falling prices of lithium are a key driver to the booming lithium industry. However, this price drop could impact lithium operators.

Let us have a look at the recent updates and stock performance of two of the prominent ASX-listed lithium producers – LPI and INF.

About the business: Lithium Power International Limited (ASX: LPI) is a lithium mining and exploration company operating in the metals and mining sector. The company is best known for its joint venture in Maricunga, the high-grade lithium mine project in Chile, in which it holds a 51% stake. Apart from Chile, the company is also engaged in lithium asset development projects in Australia and other South American regions. The company is headquartered at New South Wales, Australia.

According to an announcement on 12th June 2019, LPI gave a summarised information related to the company and its activities as of February 2019 during the 11th Lithium Supply and Markets Conference Presentation.

Maricunga Drilling Update, Chile: The company reported drilling results for Maricunga lithium project, Chile. Extensive Sonic and RC drilling crossed 4,700 metres, while more than 1,000 brine samples were taken, which included the analysis of more than 300 core samples for drainable porosity. The company also highlighted the results from the drilling program, which averaged 1,167 mg/l Li and 8,500 mg/l K. The company expects 360 metres deeper drilling a game changer for resource expansion program, if undertaken in the future. As per the drilling update, the deep hole S19 found a continuation of the lower brine aquifer with lithium concentrations above 900mg/l Li, owing to which an exploration target to a depth up to 400 metres is defined below the base of the current resources. 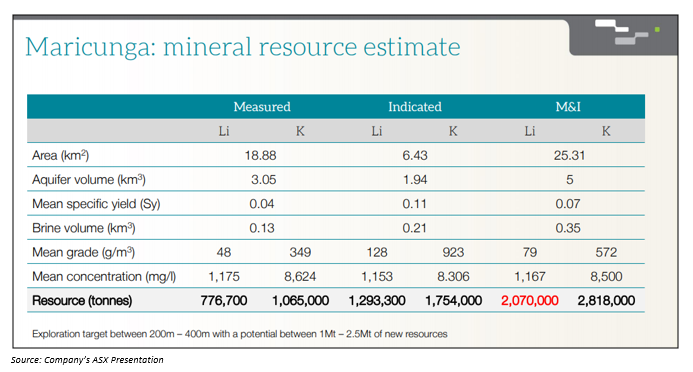 Outstanding Economics for Maricunga: Under the presentation, the company also highlighted outstanding economics for Maricunga. WorleyParsons conducted the 2019 Definitive Feasibility Study (DFS), which unveiled a US$1.302 billion pre-tax NPV and IRR of 29.8% based on leveraging 50% D/E ratio (after-tax NPV of US$940 million, IRR 26.7%). The study also revealed an NPV of US$1.286 billion, IRR of 23.8%, on a 100% equity basis. DFS also highlighted US$563.4 million in direct and indirect costs (inclusive of US$62.6 million for contingencies), US$3,772 per tonne as the total estimated lithium carbonate production costs. Moreover, the study aids 20,000 tonnes per annum production of LCE over 20 years.

Centenario is a joint venture between Lithium Power International Limited and Centenario Lithium, holding 70% and 30% stake, respectively. The company has concluded geophysical surveys, which have demonstrated an extensive brine body throughout the tenements. Moreover, government agencies have granted approval for drilling activities at the project, which is located in the centre of ‘The Lithium Triangle’.

Lithium Power International Limited wholly owns the project, for which development work started in 2Q19. Initially, 4,000 metres will be drilled to explore the greenstone lithologies at Tabba Tabba, in addition to drilling program on the greenstone belt north extension into Strelley. Soil survey over the greenstone belts within the properties have yielded positive results. The results have unveiled up to 689 ppm of elevated lithium concentrations, along with caesium, tantalum, tin and beryllium.

LPI holds a 100% stake in the project, which is located adjacent to lithium pegmatite deposits of Pilbara Minerals and Altura Mining (ASX: AJM) . The initial drilling program on the project was carried out in 2018, with the second phase of the exploration program to cover a targeted drilling of 1,000 metres. Exploration at the project is scheduled with the development program at Tabba Tabba.

LPI’s 100% owned project has tenements expanding over 400 sq km and covering the Balingup and Brockman Highway projects. The tenements have huge strike lengths of the same rock hosting the adjacent lithium mine of lithium producer Greenbushes. The company expects to obtain approval for the Conservation Management Plan for Exploration and Prospecting submitted with the State Forests in 3Q19, enabling it to carry out exploration program in the future. 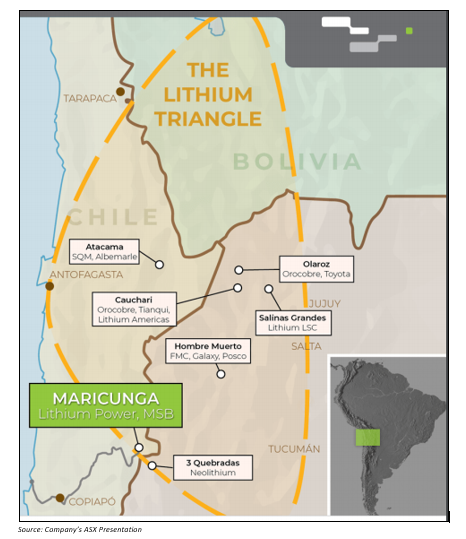 As an exploration and development company, Infinity Lithium Corporation Limited (ASX: INF) operates in metals and mining sector. The company, which is headquartered at Subiaco, Australia, mainly focuses on the production of battery grade lithium hydroxide.

Business Update: On 12th June 2019, the company updated on the pre-feasibility study for its San José Lithium Hydroxide project, in which INF holds a 75% stake, while its joint venture partner Valoriza Mineria owns the remaining 25% stake. As an integrated industrial processing facility, San José is expected to produce lithium chemicals to be used for lithium-ion batteries.

As per the announcement with ASX, the company mentioned that test work aimed at aiding the study is nearing conclusion. The test work demonstrated good lithium leachability and will be followed by precipitation, recirculation/sulphate recovery and production testing, as it has given positive confirmations on the assumptions of the lithium hydroxide scoping study, which was released in the fourth quarter of 2018.

Meanwhile, Snowden Mining Consultants is working on mine planning and production scheduling, which is being integrated with favourable geotechnical data that was earlier secured, however, not used in earlier optimisations. Some changes have also been made in the original scoping study covering plant and site layout, civil engineering and logistical work at the San José project. Moreover, dry stack tailings and water recycling work has highlighted the potential for improvements, which might include reducing tailings profiles. The study is scheduled for completion in July 2019.