Insurance market in Australia majorly comprises of three components including life insurance, general insurance and health insurance. Most of the companies in the industry have recently expanded their scope of services and are now competing with banks and subsidiaries of foreign companies.

Now let us have a look at few ASX-listed stocks in the insurance sector.

Shareholder Resolutions: The company recently disclosed regarding the shareholder resolutions to the considered at its AGM to be held on 25 October 2019. One of the resolutions pertains to Amendment to the Constitution. The proposed amendment is to insert a clause 10.3A “Advisory resolutions’, into the company’s constitution. Another resolution represents the request for disclosure of targets for reduction of investment exposure to fossil fuel assets.

Dividend Distribution: The company recently declared an ordinary dividend amounting to AUD 1.1508, to be paid on 16 September 2019. 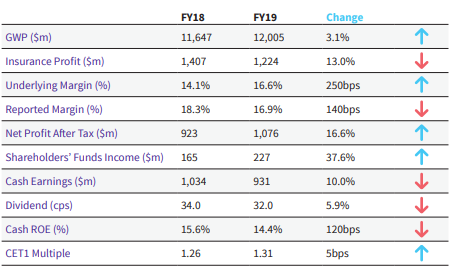 FY20 Guidance: The company expects to report low single-digit growth in gross written premium compared to that in FY19. Reported insurance margin for the period is expected to be in the range of 16% - 18%.

Suncorp Group Limited (ASX: SUN) provides insurance. Additionally, the company provides banking and wealth management services.  Target customers include retail, corporate and commercial customers. The operations of the company are mostly based out of Australia and New Zealand.

Profit after tax was an increase of 1.0% due to good performance by New Zealand. Profit after tax from New Zealand was reported at $245 million, up 81.5% from the corresponding period of prior year. Gross written premium amounted to $1.6 billion, up 10.1% in comparison to FY18. 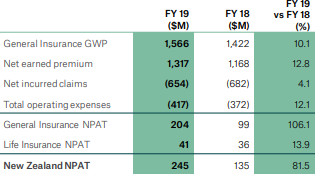 Insurance (Australia) ‘s profit after tax was $588 million, down 13.7% compared to the corresponding period of prior year. This ismainly due to higher natural hazard claims. Gross written premium stood at $8.2 billion, up 1.3% in comparison to FY18. 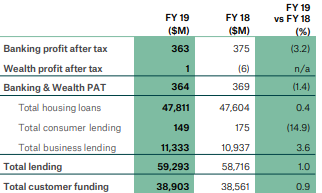 Outlook: New Zealand is expected to perform well in FY20 with low single-digit growth levels. The company will increase FY20 natural hazard allowance to increase from $720 million to $820 million. In addition, for $200 million ,the group has purchased an additional stop loss for $45 million. As a result of cost pertaining to stop loss cover and increase in natural hazard allowance, the company’s target to achieve at least 12% underlying ITR in FY20 will be impacted.

QBE Insurance Group Limited (ASX: QBE) is a company which specializes in reinsurance services. It is also involved in management of Lloyd’s syndicates and investment management services.

Senior Management Changes: The company recently released an announcement providing the changes to senior management positions. Todd Jones was appointed as the CEO, North America after Russ Johnston stepped down from the role. Jones’ tenure with QBE will commence from 01 October 2019.

1H19 Financial Highlights: During the first half year of 2019, statutory net profit after tax was $463 million. It increased 29% in comparison to that in the corresponding prior-year period. Cash profit after tax amounted to $520 million, increasing 35% in comparison to that in prior year period ($385 million). Adjusted combined operating ratio of the group stood at 95.2%, less than the mid-point of FY19 target range of 94.5% - 96.5%. Gross written premium for the half was reported at $7,637 million compared to $7,887 million in prior corresponding period. The company’s debt to equity ratio reduced to 36.8%, from 38.0% in FY18. An interim dividend of AUD 25 cents per share was also declared, as compared to AUD 22 cents per share in prior corresponding period. 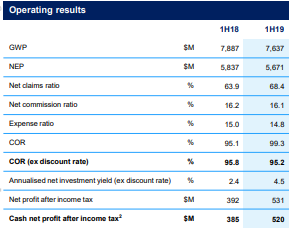 The company recently updated that Standard & Poor lowered its ratings on the company and its subsidiaries by one notch due to pending divestment of AMP Life. The company’s rating moved from A- to BBB+.

Share Purchase and Recent Capital Raising: The company recently opened its Share Purchase Plan, providing equity holders a chance to  get up to A$15,000 worth of shares at a discount. Recently, the company has also completed an institutional placement to raise A$650 million, through issue of approximately 406.3 million fully paid ordinary shares to new and existing institutional investors.

AMP Strategy: The company also disclosed its three-year transformational investment program worth A$1.0 billion – A$1.3 billion, to drive growth, reduce costs and de-risk the business. Over the period, the company will undertake cost reduction initiatives to deliver annual run-rate cost savings of $300 million by FY22.