A Look At Emerging Trend Of Neobanks In Australia

Do You Know About Neobanks?

A Neobank is a completely digital bank that is created to work on digital and mobile platforms. Such banks do not use any existing legacy systems to operate. They do not use any digital operating systems or physical infrastructure that is already being used by existing financial institutions in Australia. Being completely online, these banks do not have any brick-and-mortar location or branches. The benefits of neobanking include transparency with fewer surprise charges and penalty rates, low costs due to less maintenance fees, useful technology and easier loan approval.

Such banks offer the following services:

Australia has a number of neobanks committed to revolutionising the financial industry using their advanced technology and digital services. The neobanks operating in Australia include Xinja, Archa, Revolut, QPay, 86 400, Up, Pelikin and Volt. 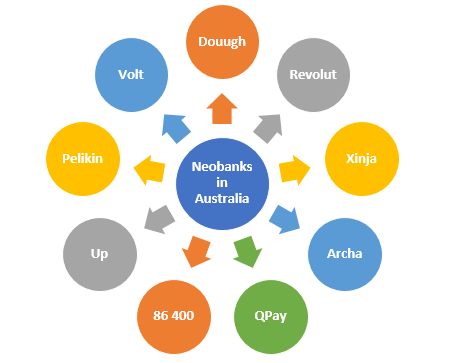 The Australian Prudential Regulation Authority (APRA) awarded an Authorised Deposit-Taking Institution (ADI) licence to Volt in January 2019, making it the first of a new generation of completely digital banks to compete with the big four. The ADI licence enabled it to work as a fully functioning neobank in Australia. Subsequent to this, Judo Bank received a full banking licence from APRA in April 2019. It became the second fintech to be granted an ADI licence in 2019.

The other challenger banks, including Xinja and 86 400, are also waiting for the grant of ADI licences. The neobank 86 400 – backed by a provider of payments services Cuscal has applied for an unrestricted ADI licence and is expected to release a transaction account and savings account in 2019.

An Australian fintech start-up run by SocietyOne co-founder Andy Taylor, Douugh, is set to become the first challenger bank to go public on the Australian Stock Exchange. The listing is expected to take place in mid-July with the company waiting to raise $10 million from the listing. The company has received a fresh injection of capital from Japanese financial services giant Monex Group.

Chief executive and founder of Douugh, Mr Andy Taylor informed that the company has chosen the US as its first market, and if Douugh could prove itself there, it would give it a strong foundation for global growth. The company hopes to have 1 million people with Douugh accounts in the next three years.

Douugh’s partnership with existing banks enabled it to utilise their licence and offer full bank accounts to customers, without any need for a banking licence from APRA to be a deposit-taking institution.

Launch of a UK-based Neobank in Australia

Marking its first expansion outside of Europe, UK-based fintech firm Revolut has become the latest so-called neobank to launch in Australia. Revolut is among the fastest-growing technology companies of Europe, valued at $US1.7 billion.

The neobank brought the beta version of its app to Australia. Revolut has received approval from the Australian Securities and Investments Commission to use its European EMI (electronic money licence) to assist its beta launch in Australia. In order to win young, digital-savvy customers from the major banks, Revolut had started switching on its digital wallet for Australian customers.

Melbourne has been selected as Australian headquarters by Revolut, where it will be hiring up to 30 people by the end of 2019. It will roll out its services to the first 20,000 people on its waitlist and will add a couple of hundred a day over the next few months. Recently, Revolut also extended its support for Apple Pay, enabling users of sixteen European markets to use the payment option.

Emerging as a threat to the big four banks operating in Australia, Revolut seeks to disrupt Australia's banking system. A change in the federal budget last year has paved the way for the increased competition. The barriers to new entrants following the financial services royal commission have been reduced, with the capital requirements lowered from $50 million to $3 million.

Since its establishment in 2015, Revolut has attracted 5 million customers across 30 European markets and has so far raised 336 million dollars from investors. The track record of Revolut shows its capability in quickly acquiring customers, making its arrival a bigger threat than the home players for the major banks in Australia.

The following services will be provided by Revolut in Australia:

A recent report on smartphone wallets has indicated that the $22 billion of revenue across the major Australian banks is at risk from the digital wallets offered by Google Pay, Apple Pay, Samsung Pay and PayPal. These digital wallets are becoming more attractive to customers, and there is a need for banks to lift their digital investment to stay competitive. In January this year, 6.8 percent of Australians were using digital payments services in comparison to the 5.8 percent Australians using banks' own mobile apps.

In May this year, one of the major four banks of Australia, the Commonwealth Bank of Australia (CBA) announced its plan to double down on its investment in digital technology in an effort to rebuild consumer trust and improve its digital capabilities. It plans to spend $5 billion over the next five years in its technology systems, informed the chief executive of the bank, Matt Comyn.

Helping customers avoid fees and find missing payments, the bank will relaunch its banking application with deep personalisation based around data analytics. The bank has also decided to launch an automated business lending approval process, allowing CBA customers to approve their unsecured loans of less than $250,000 in 12 minutes.