Agriculture in Australia has recently become extremely diversified and plays a major role in its development. The industry makes an important contribution to the economy and a large part of the total agricultural production is exported. Australia has become a leading exporter of agriculture produce with the expanse of its arable land and large-scale farming activities. The Australian agricultural industry majorly engages in the export of wheat, wool and barley to its consumers, some of them being China, the United States, Japan and Indonesia.

Some specialists say that the Australian agricultural industry will experience rising offshore demand and improved market access in the near future and will reap the benefits of growing investment in the sector. It is expected that the Australian agricultural produce will see continued demand in global markets. Under the FTA (Free Trade Agreement) and the protocols negotiated for a range of products, barriers to China will come down. The industry will also see fortune coming from the trade benefits it enjoys under the Trans-Pacific Partnership, especially with Japan. In addition, the investments attracted by the agricultural industry due to the rising export market opportunities will also help the sector flourish.

The total agricultural production in Australia is accustomed to its variable climate, as stated by the Australian Government Department of Agriculture. Although, the value of farm produce is estimated to have fallen by 4% in 2018-19 due to certain factors, the industry still has a scope of recovery in 2019-20, followed by gradual growth over the medium term.

Though agriculture contributes a very small percentage of Australia’s GDP, the future holds great fortune for the industry with the growing demand of the produce at offshore locations.

Now let us have a look at the agricultural stocks NUF, ROO, CLI, RGI listed on ASX

Nufarm Limited (ASX: NUF) is primarily engaged in the manufacturing and sale of crop protection products and its proprietary seed technologies business.

On 3rd June 2019, the company released an update on Glyphosate. Nufarm does not manufacture glyphosate rather it purchases the material from manufacturers in Monsanto to formulate into glyphosate-based products for sale. Though the company has not faced any lawsuit in any jurisdiction related to glyphosate-based herbicides, the increasing corporate risk connected to it has increased, which calls for further market disclosure. The company stated that glyphosate is the most widely used crop protection product and is safe to use in accordance with the label directions.

For the six months ended 31st January 2019, the company reported revenue growth of 8% from $1,460 million in HY18 to $1,576 million in HY19. Underlying EBITDA went down at a rate of 2% from $123.2 million in HY18 to $120.9 million in HY19, impacted by depreciation and amortisation of $33.8 million. A robust performance in sales at the rate of 19% was reported in North America, owing to the early-order program for turf and ornamental, slightly offset by lower burndown sales caused by the wet fall season. Latin America region reported continued growth in sales at the rate of 18%, as a result of a gain in market share for key products and higher soy plantings. Seed technologies region reported a sales growth of 12%, owing to a strong contribution from European sunflowers and greater market access because of new products. Sales in Europe were impacted by a slow start to the season with dry weather in central and northern Europe and high channel inventories that delayed the purchases. Sales in the region grew at a rate of 15%. 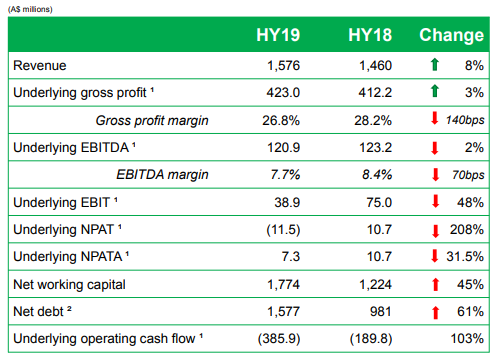 There are predictions that the challenging climate conditions in Australia will impact the performance in 2H19. There has been a set of initiatives for the second half of the year, including accelerating supply transition, performance improvement program in Australia to reduce earnings volatility and competitiveness of the business and cash generation.

Roots Sustainable Agricultural Technologies Ltd (ASX: ROO) is primarily engaged in the sale of root zone heating and cooling systems to greenhouse farmers and the development of irrigation systems. As per the announcement to the exchange on 17th June 2019, the company is undertaking a pro rata non-renounceable rights issue to raise up to $1,700,752. The price of the new options in the offer is $0.04. The funds raised will be utilised for the purpose of installation and engineering, general administration, expenses of the offer, sales and marketing and business development and working capital.

On 15th May 2019, the company announced that it had raised $1.66 million in private placement financing for expansion of cannabis growers marketing and sales activity in the United States, to commercialise RZTO marketing, sales opportunities in various jurisdictions, to provide ongoing working capital for the business and funding of new cannabis and hemp opportunities.

On the outlook front, the company is planning to concentrate on increasing sales in the global cannabis market and will devote marketing and sales support to drive sales for the segment. During 2019, the company will also aim at entering the Australian market either through a distribution partner or directly with the local growers.

CropLogic Limited (ASX: CLI) is engaged in providing agricultural technology services to various crop growers. In an announcement to the exchange on 12th June 2019, the company reported the acquisition of indirect interest by one of its directors, Steven Wakefield. Effective 7th June 2019, Steven acquired 2,000,000 fully paid ordinary shares at a price of $0.039 per share.

On 29th May 2019, the company announced that it had raised US$4.25 million via debt instrument in addition to $3 million of equity raised earlier. The speed with which the company has been securing funding in the form of equity and debt accompanied by favourable terms and the international nature of investors speaks volumes about the growing global profile of CropLogic. 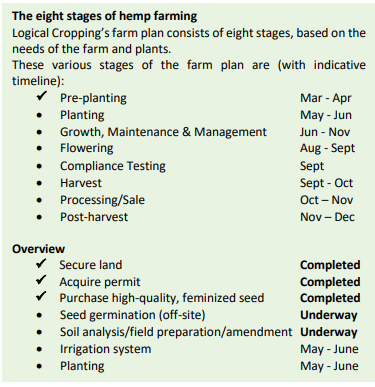 On 11th June 2019, the company released an announcement related to the lapse of 7,000,000 Class B Performance Rights due to the performance milestone of cumulative sales of $20 million no later than 28 months after the date of satisfaction of the SSA conditions not being met.

In the quarterly activities report for the period ended 31 March 2019, the company delivered and installed 24 RotoGro Systems to Miracle Valley as a part of its $2.3 million purchase order. Also, after the closing of the quarter, the company secured $600,000 order with Frozen Penguin Medical Industries Inc. Its wholly-owned subsidiary, Global Fertigation Solutions performed well, securing more than $500,000 of new sales during the quarter. The period also saw the completion of the state-of-the-art laboratory located at its Research and Development Facility in Caledon, Ontario, Canada. During the period, the company also completed the acquisition of Supra THC Services Inc., positioning itself as an emerging cultivator of high value crops in the lawful cannabis space. It has also executed two partnerships in the retail food space.